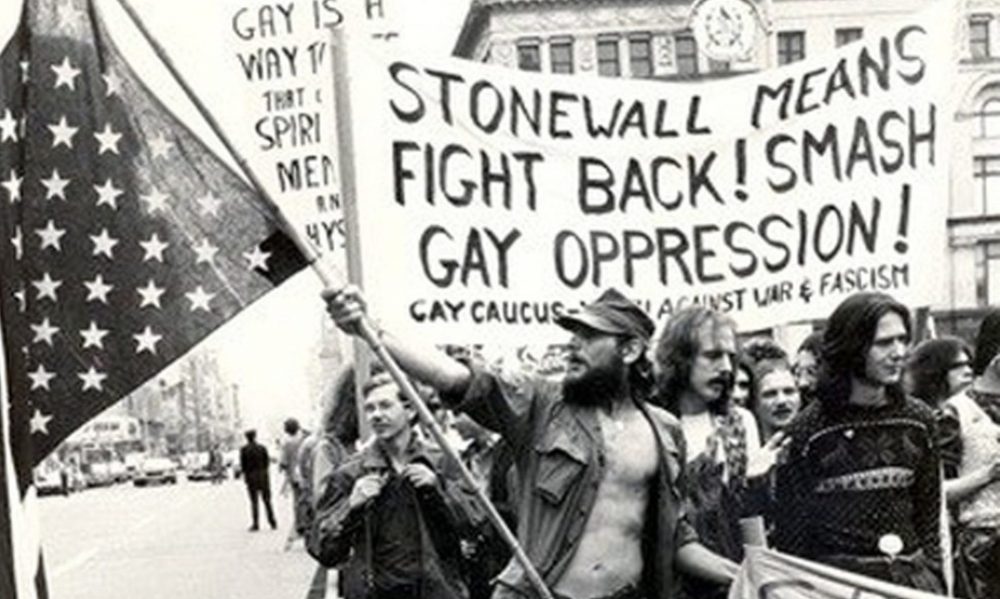 Note: This article was originally published on Popular Resistance on June 27, 2019.
KZ

We, the people means all of us. Including lesbian, gay, bisexual, transgender, queer and gender-free people. So we commemorate the 50th anniversary of the Stonewall Rebellion that took place in and around the Stonewall Inn, a gay bar in Greenwich Village in New York City. On June 28 in 1969, the police raided that bar and expected business as usual. Instead, they met open resistance. The bar patrons included working class people, drag queens, transgender rebels, and people of color.

By the time police wagons arrived, people were shouting “Gay Power” and “We Shall Overcome.” The peace and civil rights movements of the 1960s were a rising tide, and the Stonewall Rebellion likewise became a point of no return to the sexual and social status quo for many people who refused to live their lives in the closet. Over several following nights, the streets were filled with a fabulous mix of human beings ready to defend civil and human rights and the whole spectrum of sexual and gender freedom. The right to privacy is worth our strong defense, but our right to the public world is the ground we are gaining even now.

Solidarity means democracy from the ground up, defending the gains we have made but ready to go forward. The LGBT movement is a work in progress, so any single acronym is just a working title. Many other groups might be added to the acronym, including queer, intersex, and loving people of all kinds who just don’t fit in the pink and blue boxes of gender. This movement is a rainbow coalition of communities. If that rainbow excludes women, people of color, and working-class communities, then that is no rainbow at all. Then a movement of liberation will become only a shadow cast by the past.

We deserve better than the niche marketing schemes of corporations.  We won’t accept career politicians who say: You get to go this far, but no further. We want a public culture that goes way beyond the worship of wealth and celebrity. As for equality under the law, absolutely—but only if the laws respect our human dignity at work and in the places we live. Otherwise, the fight for legal reforms continues, and we do not grant bosses and politicians the right to throw us under the Wheel of Fortune.

Like any social movement, the LGBT movement inherits both the problems and the possibilities of social change. When we remember the Stonewall Rebellion, let’s also remember the long history of sexual and gender rebels who came before that event and the many people after that event who stepped out into public life and made the right kind of trouble. Let’s remember the Street Transvestite Action Revolutionaries, founded in 1970 by Sylvia Rivera and Marsha P. Johnson. Let’s remember the Lavender Left, founded during the first Lesbian/Gay March on Washington, DC in 1979 to gather LGBT anarchists and socialists into a national coalition. Let’s remember ACT UP, the AIDS Coalition to Unleash Power, founded in 1987 to combat social and medical neglect during a global health crisis. And let’s go forward with a class conscious LGBT movement to defend our social gains and advance our common goals.

Changes in legal rights to get married or join the military are not the beginning nor the end of our struggle for human dignity. Both marriage and the military have been gateways for some legal and material benefits, but such bargains with state power leave plenty of people exposed to heavy weather. The right to legal marriage is one real gain for those who choose it, but it is a mixed blessing if the social contract remains punitive for single people and for people who have other ideas of domestic bliss. Where are we now? Only in twenty states and Washington DC do LGBT people have solid employment rights. We can marry on Sunday and be fired on Monday. That is not a great bargain. That is a great betrayal.

Likewise, when veterans come home from the wars, they deserve our care and solidarity. Many veterans are among the dedicated makers of peace because they know the real deal of war and they often face broken promises in civilian life. If wars must be fought, then we, the people, deserve a full and democratic public debate. The military budget remains unaccountable before the full public. Meanwhile, public goods and services go begging.  An economy devoted to war and empire is a weapon of mass destruction, within and across national borders. Militarism is a fortress of toxic masculinity and often rewards the drill sergeants of gender norms. Civilian control of the military has to include respect for war resisters, full civil liberties during both war and peace, and defense of gender rebels in uniform and in civilian life.

The far right often attacks what they call “The Gay Agenda.” They have done so for decades in this country, and have even forged alliances with far-right regimes round the world. Their version of our agenda comes down to charges that we are gender traitors and a menace to families and the social order. In this way, they advance the erosion of human rights and civil liberties. Solidarity requires all defenders of public freedom to fight back at the point of attack, and this means resolute peaceful resistance across all lines of nationality, sexual identity, and partisan preference.

So what is really the present and practical agenda of lesbian, gay, bisexual, transgender and queer people? Across all of the big public issues such as housing, health care, and education, this agenda means first and foremost a full defense of human rights and public freedom. For everyone, without concessions or compromises.

At the same time, we must acknowledge the plain facts of this society. We have solid social surveys that show that a high number of LGBT people, and especially the young among them, are driven into homelessness, despair and even suicide by parents who deny them shelter, by schools that teach bigotry, and by religious institutions that preach hatred. The health and human needs of LGBT people are still not secure, and if they are working class they already face the fractures of the current health care system. And no surprise, a class divided education system often has no time and resources for LGBT people, either.

The Green Party takes a solid stand for peace, economic justice, and ecological sanity. The present climate crisis is not just a change in the long span of natural events, but is instead the consequence of the corporate extraction of fossil fuels and of all global resources without democratic debate and limits. This is therefore also an ongoing crisis in the political power of the ruling class, since it gambles away our common lives and future while strip-mining and polluting the whole earth. This is a crisis that reveals the starkest class divisions, and that opens the abyss of barbarism. A crisis that bears down upon our daily life and health, and may condemn future generations to a bare struggle for existence. A crisis that threatens to drag nations into ever deeper social divisions and into a series of escalating proxy wars, if not a new world war. What power can we muster against the power of the corporate state? The power of common reason and the power of class conscious solidarity.

A class conscious Green New deal means we, the people must take the lead in our workplaces and communities. We can’t turn over our power to the corporate command economy, and we can’t put our trust in any new caste of career politicians. In both class struggles and in political campaigns, peaceful resistance is by far the better path. For both ethical and pragmatic reasons. The ruling class also gets a vote, however, in the use of force and in their methods of imposing austerity regimes. All the more reason to defend and strengthen public freedom and civil liberties, and the peaceful power we can forge through open solidarity.

The Green Party has a caucus of lesbian, gay, bisexual, transgender and queer members that goes back to the previous century, and Green candidates step up to our issues in public campaigns. Howie Hawkins is a member of the Green Party and has long experience in the labor movement, he understands the iron links between profit-driven extraction industries and the exploitation of workers, and he honors the history of our social movements. The Hawkins campaign does not “lead” the LGBT movement, because no one person or party has the right to make such a claim. Both the Green Party and Hawkins are in earnest, however, when they work in practical solidarity with our movements for human rights and social justice.

2020 will clarify just how far a reform effort can go in the Democratic Party, but we can expect that the old guard of career politicians in that party will defend their own interests and their corporate funders. Bernie Sanders has called for a political revolution, but Congress still remains the front office of the ruling class. That means there is still a bipartisan consensus in favor of the corporate state, and against serious reforms of the anti-democratic electoral system.

The Green Party does not call for a utopia far over the horizon. The reforms that the Green Party supports are founded upon both the common sense of our communities and upon the evidence of the scientific community. When we raise the ground floor of social democracy in housing, health care, and education, then the choice of work and kinship would be a better bargain for us all. This is a wealthy nation, though what should be our public wealth goes largely into very few private accounts.

Solidarity means democracy from the ground up, so we cannot expect there will be any short cuts to a political revolution. No maps that guide us on a straightforward path from the present to the future. No saviors who set up new gilded idols for us to worship, and betray democracy by corporate command. Without any such illusions, are we just left to hope beyond hope? Real hope begins with real communities. If we hope to win a new world, this is a good and simple rule: Start small and start now.

When we remember the Stonewall Rebellion, we should also commit to common memory the many rebels who thought they might be alone but found common ground in movements of popular resistance. When a peaceful crowd had gathered to demand jobs, food and a fair voting system in Manchester, England in 1819, the local authorities gave the order to arrest the public speakers, and then to disperse the crowd with soldiers mounted on horses. They charged with sabers drawn, killing 18 people and wounding hundreds. When the poet Percy Bysshe Shelley got news of the massacre, he wrote lines that are still a living refrain at labor rallies and that have resounded round the world:

Rise like lions after slumber
In unvanquishable number!
Shake your chains to earth like dew
Which in sleep had fallen on you
You are many—they are few!