Above Photo: A painting of Daher Al-Umar by Ziad Daher Zaydany circa 2010

Akka, Haifa, Tabaria, are all cities with a rich Arab history which Daher made into thriving towns, and yet little memory of him existents thanks to enormous efforts put forward by the state of Israel to control the historical narrative.

The history of Palestine, even its very recent history, has been all but forgotten. It was pushed out by a new version of history, a narrative that is based on faith and has very little to do with history. One striking example is that of the 18th-century Palestinian leader and unifier, Daher Al-Umar. For most people, neither the man or the period in which he ruled Palestine is known.

This matchless character has long been worthy of the attention of novelists and film and television producers, who could have made him a luminous part of our popular consciousness and the ongoing struggle of the people who populated and gave life to the land of Palestine.”

In his forward to The Lanterns of the King of Galilee, a historical novel based on the life of Daher Al-Umar published in 2011 in Arabic, and in English in 2014, Nasrallah writes, “What saddens me now is that I didn’t come to know this great man earlier in my life.” The man to which he is referring is Daher Al-Umar Al-Zaidani, also known as The King of Galilee, whose remarkable life spanned from 1689 to 1775.

Daher Al-Umar governed most of historic Palestine and shaped its economy and politics as well as the life of its inhabitants for the better part of the 18th century. He established ties – economic and political – with European empires and created a boost in the economy and lives of the people of Palestine that was unprecedented. Palestine, under Daher, was the closest thing to an independent state one could achieve in 18th century Levant.

I had only heard of Daher Al-Umar from reading Nasrallah’s book, which shows that Nasrallah is correct as he continues to say in his forward, “Unfortunately many people are ignorant of what Daher achieved toward establishing an autonomous Arab homeland in Palestine.” However, what is astonishing is that Nasrallah himself admits that he only came across the figure of Daher in 1985 while working on his epic novel, Time of White Horses, published in Arabic in 2007 and in English in 2012.

In his forward, Nasrallah doesn’t shy away from stating the obvious, that his homeland, the country which Daher unified and ruled, namely Palestine, “fell prey to the Zionist onslaught that wrested it from its owners by means of myths, tanks and collusion.”

One might add that these myths used by the ZIonists were not just any myths, but perhaps the most powerful myths the world has ever known. In fact, even referring to these stories as “myth” will surely give rise to serious opposition as we are talking about none other than the Bible itself.

The Zionists based their claims to rights over Palestine using the toughest narrative to challenge. It is not one that is tough to challenge because it is rooted in historical facts, but because it is rooted in faith. In establishing their stake to Palestine, the Zionists built a foundation on three myths that operate as three pillars: The myth of the Jewish people, the myth of the homeland and the myth of history, and all three stem from the biblical narrative. 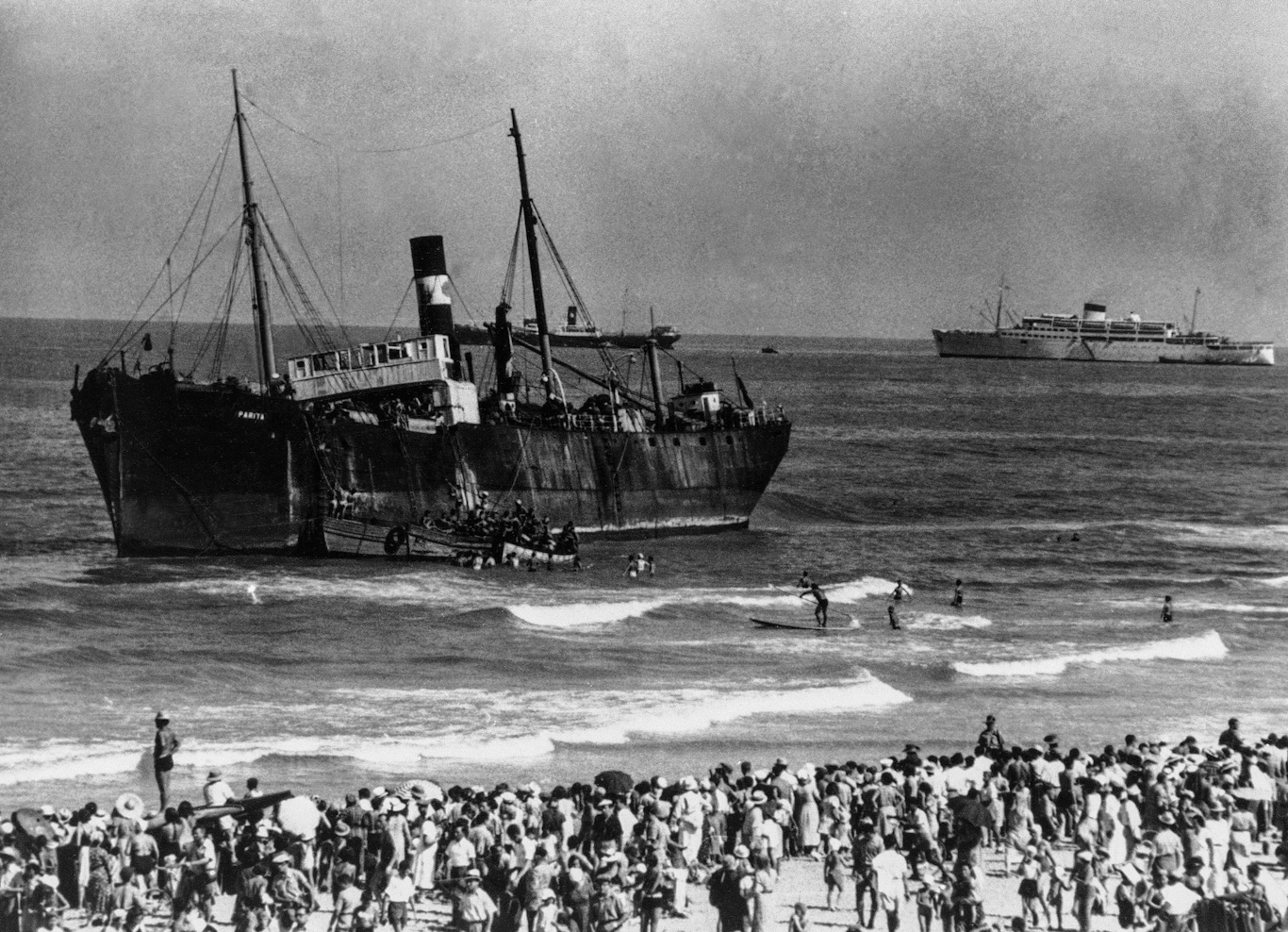 In the early morning in Tel Aviv, the S.S. Parita, with 700 Jewish refugees on board, was beached opposite the Ritz Hotel in Tel Aviv, the all-Jewish town in Palestine, Aug. 22, 1939. After the beaching of the vessel the refugees disembarked. (AP Photo)

The myth of Jewish people claims that Jews are a nation like all nations, unified by a common language, history and country. This myth is in direct opposition to the way observant, orthodox Jewish people define themselves, which is as a people unified by a common faith and observance to the Almighty. This definition allows for Jewish people to be Arabs and speak Arabic, to be Polish and speak Polish or Yiddish or to be citizens of any other country in the world and still remain Jewish, as they had done for two millennia.

The myth of the homeland claims that Palestine is the homeland of the Jewish people and that it has been empty for thousands of years. This myth stands in contrast to the fact that Jews have a home and land wherever they reside, and Palestine is and always was inhabited and thriving.

The myth of that history involves the secularization of the Old Testament. It treats the Old Testament as a historical document that describes the history of the Jewish people. According to this myth, the Bible has historical value, even though centuries of research prove otherwise. Furthermore, this myth ignores the fact that the bible is not a history book but rather a book of faith with little significant historical foundation.

It is in the face of these challenging myths that opponents of Zionism and supporters of the rights of Palestinians have to struggle. It is in this context that knowing about Daher Al-Umar is so crucial, and one must ask, why and how a figure of such stature, influence and importance was erased from memory.

Nasrallah writes that his acquaintance with Daher had given him the ability to “trace the roots that go so deep into the land of Palestine.” He continues to describe this Palestine specifically as, “Arab Palestine, the Palestine of beauty, tolerance and the willingness to embrace the other.” People who know Palestine, particularly pre-ZIonist Palestine, will agree with Nasrallah when he goes even further, calling it, “the Palestine of cultural, spiritual and human richness; the Palestine that aspires to all that is free, lovely and good.”

Daher was known for his tolerance and the good relations he forged with Christian communities, Jewish communities and the Shia community of southern Lebanon. At his invitation, Jews from Izmir had come to come to Tabaria, or Tiberias and settled there during his reign. Sadly, as a result of the 1948 Zionist destruction and forced exile, little remains of the Arab Tabaria of Daher. 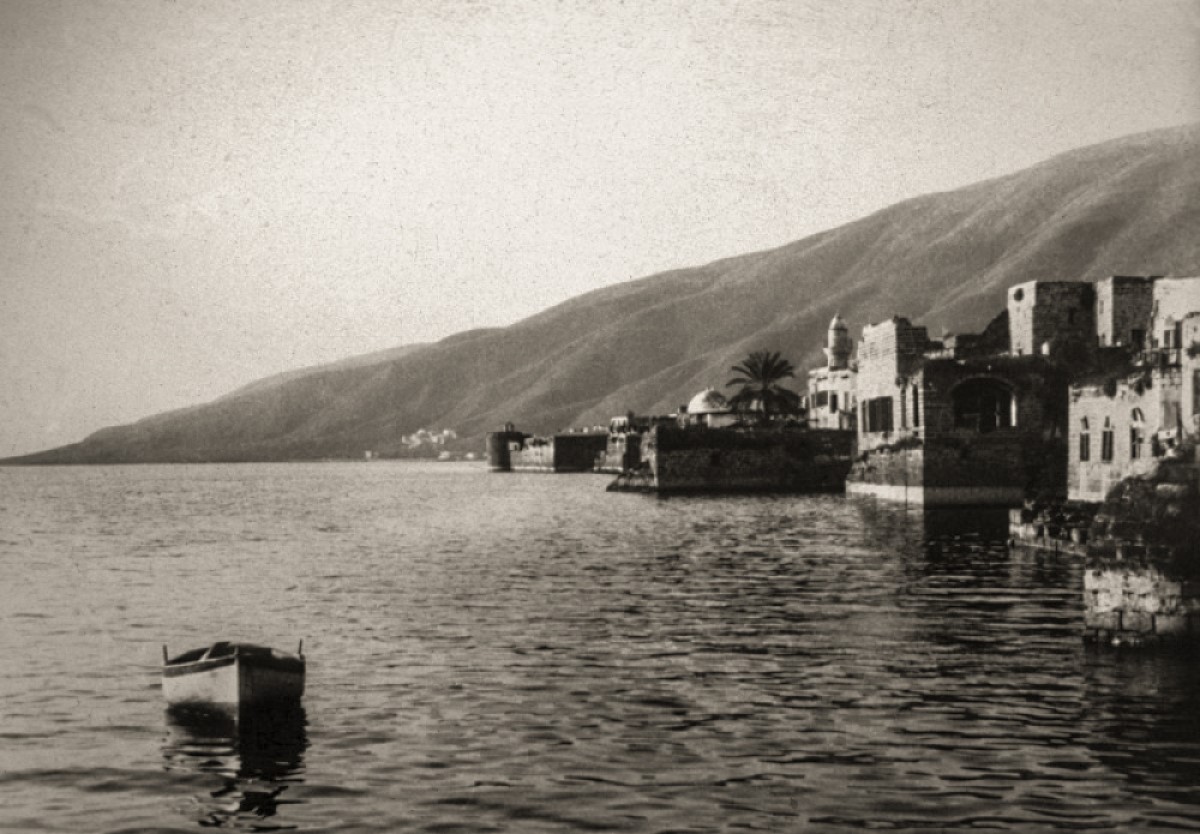 Tiberias pictured circa 1936, prior to the 1948 Nakba. Source | Kahvedjian Collection

The mosque Daher built in the city still stands. It is a monument that under any other circumstances would have been venerated, cared for and used by the faithful. According to Zochrot and to what any visitor can witness, the mosque still stands, but it was desecrated and until recently used by the city as a storage space. Now it remains closed and neglected.

Akka, Haifa, Tabaria, are all cities with a rich Arab history which Daher made into thriving towns, and yet no memory of him exists. The onslaught of Zionist erasure of the history, names and monuments on the one hand and enormous efforts put forward by the new state of Israel to push forward a historical narrative that supports Israel’s existence has been devastating and incredibly difficult to challenge.

All of the cities that existed in Palestine prior to 1948 and were subjected to ethnic cleansing had their streets renamed. Most, if not all, have streets named after Ben-Gurion, Weizman, Hertzel, Balfour, and other major Zionist figures. Streets have been renamed after Israeli generals like Rabin, Dayan, Bar-Lev, etc., and still others are named after military units, replacing the historical names that used to exist. This process continues to this day and can be seen clearly, particularly in Jerusalem where the “Zionization” process is in full force.

Ibrahim Nasrallah ends his forward expressing the hope that, “those who read this novel will relive all the feelings I experienced in the course of writing it, and when that happens I’m sure they’ll sense how much better they’ve become.” Having read the book, I must agree.