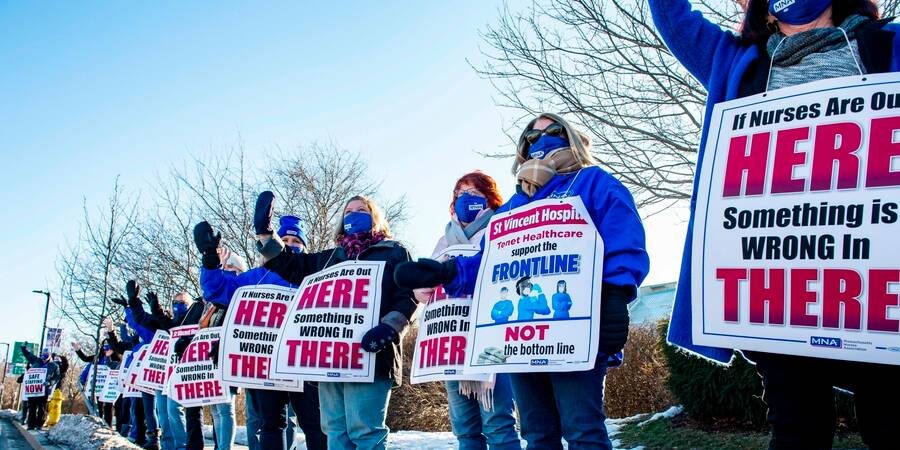 Above Photo: The St. Vincent Nurses are still on strike. Joseph Prezioso/AFP Via Getty Images.

Ten thousand John Deere workers went on strike today. Sixty thousand IATSE members may be on strike by Monday. They will join the thousands of nurses, miners, hospital workers, factory workers, and others already on strike across America. Here we are, in our long-awaited strike wave. What does this thrilling development tell the labor movement about what its future direction should be?

Let me phrase that in a more positive way: The current wave of aggressive strike actions across the country is one of the most politically inspiring things that has happened in years. But the fundamental thing that the labor movement needs to do remains exactly the same as it was last year, and the year before that: We need to organize many, many more workers into unions. A strike wave in a growing labor movement is the seed of something big for society as a whole; a strike wave inside a shrinking labor movement is, for all of its charms, a taunt to everyone on the outside looking in. In a society defined by inequality and elitism, unions are in danger of becoming just another benefit for the lucky few.

The promise and power of these strikes carry with them the imperative for unions to grow. As long as union density continues to decline, as it has since the middle of the 20th century, strikes will remain a tool inaccessible to the vast majority of working people in America. The strike wave will be a bomb whose blast radius is tightly contained. Its full potential will never be unleashed unless we make it possible for everyone to embrace its lessons. Inspiring millions of workers to fight for better lives is great — but when only 10 percent of them have the tool necessary to get it done, that inspiration can quickly curdle into cynicism and despair.

The good news is that strikes and new organizing are naturally complementary. There is no better advertisement for the benefits of joining a union than a highly visible successful strike that brings some high-handed employer to its knees. If IATSE goes on strike, the entire film and television industries will come to a halt. That’s pretty fucking impressive, by any standard. Many Americans may not know much about unions, but they will know when their favorite TV shows go off the air due to the fact that the people who work on those shows are unwilling to continue eating shit. (They will also notice when all of their favorite celebrities come out in support of the strike, because they know what’s good for them in a widely unionized industry.) Strikes bring media coverage and attention in local communities to a tangible, direct demonstration of the power of organized labor. That is a rare and valuable thing. This strike wave will make many people want to have a union of their own. The question is whether the institutions of organized labor — big unions and the AFL-CIO — will make a plan to capitalize on this in a systematic way. And fund the plan. And execute the plan. Of that, we have no evidence yet.

This gets to the heart of why the union establishment can seem so moribund at the same time that the labor movement, broadly conceived, can seem so vibrant and energized. People have energy. People are pissed. People are ready to fight. The institutions that exist to ostensibly enable that to happen are, to a large extent, insulated from the fluctuations of public opinion on the street, and only incidentally concerned about harnessing these outpourings of energy. It is all too easy for these labor institutions to smile and cheer the strike wave as it happens, then move forward as always. Yay! Great! Strikes! Attention! But where is the plan to organize the next 10 million union members, and where are the resources to fund it?

WHAT IS THE PLAN FOR MASS ORGANIZING, AND WHERE IS THE MONEY FOR IT? These are the questions we need answers to from the union world. We do not need a month of supportive tweets. We need several hundred million dollars, dedicated to new organizing. To start.

Nobody predicted this strike wave. (Except for the people who constantly predict a strike wave every year, and they don’t count.) Anyone who says they can predict the mysterious fluctuations of social movements is lying. Nobody knew the pandemic would happen; when it did happen, nobody knew what the government’s economic and legislative response would be; and even when we knew what the relief packages would be, no one accurately predicted how the American economy would react, nor how that economic reaction would change the psyche of the American workforce. Imagining that we can engineer these things from scratch is fatal hubris. What we do know for sure is that the people who will go on strike are people who have unions.

The labor movement cannot control the next social crisis. Nor can it dictate what the government’s response will be. What it can control is organizing people into unions. If we take advantage of this moment of intense public enthusiasm to organize many more people into unions, then when the need arises for the next strike wave, people will be able to strike. Because they have unions. If we allow union density to continue to decline, then we can be certain that the vital tools that unions provide will play a smaller and smaller role in future social crises, despite the fact that they are exactly what people need to handle such crises well.

Mass uprisings will always come from the grassroots. What we ask of our institutions is to be positioned to take advantage of those uprisings, and to continue the fight for the cause when those uprisings die out. In the case of the labor movement, that means — above all other tasks — organizing millions and millions more people into unions. That is what will make the movement ultimately rise or fall.

By that standard, we are still not winning, no matter how satisfying the current moment feels. #Striketober is a great thing. It will end. If we want a strike decade, we better get to work.