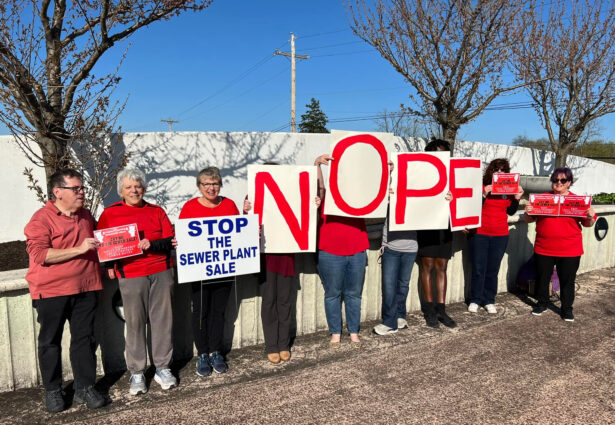 With privatization of wastewater systems on the rise in Pennsylvania, citizens are mobilizing to fight its costs and forging victories.

Pennsylvania – In early September, the three county commissioners of Bucks County, just north of Philadelphia, voted down a $1.1 billion bid from Aqua Pennsylvania to buy their sewer system. This response to an outpouring of citizen concern about what would have been the largest privatization of a public wastewater system in the country illuminates a larger story — both of the encroachment of privatization and the potential for victories when citizens mobilize around its costs.

Aqua had been systematically buying up smaller water systems for years. In New Garden in southeastern Pennsylvania, Bill Ferguson saw his wastewater rates jump nearly 70 percent in the few years after Aqua purchased his township’s sewer system in 2017. Members of the group he co-founded, Keep Water Affordable, began driving to meetings in other townships and telling their story, warning of the dangers of privatization.

The effort was too late for some. Cheltenham, Bensalem, Limerick, Horsham, East Bradford and East Norriton all lost control of their sewer systems in the ensuing years. The story in nearby Norristown, however, was different. There, David McMahon, got wind of a possible sale in 2020 and made it his business to be at every council meeting. One day that summer, the Municipal Council announced that it had accepted Aqua’s bid and would give residents one week for feedback. He and other neighbors frantically began getting the word out, but there was no time for effective mobilization. Fortunately, the official process had some bumps along the way, and by the third chance to stop the sale the neighbors had been able to gather more than enough petition signatures to repeal the ordinance.

McMahon’s group, which was originally called Norristown Opposing Privatization Efforts, or NOPE, soon made the “N” stand for “Neighbors,” as its efforts went statewide. They connected with concerned citizens in nearby towns of Towamencin, Conshohocken and Willistown, and began getting the support of some national environmental and legal rights organizations. “We just have to get the word out,” McMahon told the Delaware Valley Journal. “Once people are aware this is in their future, they rally.”

In 2021, two women in Conshohocken were able to build on this experience to organize widespread neighborhood resistance to a rumored sale. Online posts about sewer rates got attention, a Facebook page was launched, local bloggers took note, a petition was organized, flyers blanketed the city and over a hundred lawn signs went up. Angry residents packed council Zoom meetings in the spring, worried that their elected officials were trying to pull a fast one. The council took note and voted to walk away from Aqua’s $52 million offer despite the powerfully attractive short-term solution it offered, as they struggled with aging borough infrastructure, declining revenues and rising service costs.

This growth of private offers for public sewage systems has mushroomed in Pennsylvania since the passage of several state laws — one allowing water companies to recover the costs of acquisitions by raising rates, then another in 2016 authorizing municipalities to sell their public utilities at “fair market value.” Together, these changes created a perfect storm, allowing private companies to buy public systems at inflated prices and then use the cost of the acquisition to justify rate hikes — all while offering local politicians a tantalizing alternative to raising taxes for acquiring much needed cash.

These changes to the legal system created the conditions for Aqua’s rapid expansion, which set it up to make its biggest bid yet: an unsolicited offer of $1.1 billion for the sale of the Bucks County sewer system. News of the deal, giving Aqua exclusive rights to negotiate the sale with the Bucks Water and Sewer Authority, leaked in April after months of behind-the-scenes discussions. In a July meeting of the authority, a vote was hurriedly added to the agenda at the last minute and approved 3-1. The authority’s chair noted the potential of the proceeds from the sale — equaling approximately five times Bucks County’s annual tax revenue — for eliminating debt, freezing tax increases and meeting other essential needs.

Yet customers, employees and an increasing number of county municipalities began calling for rejection of the agreement, citing concerns about rate hikes, repairs and accountability. According to Doylestown Township supervisors, such sales are proven to lead to skyrocketing rates and fees, and that local municipalities had virtually no influence or recourse in preventing such drastic increases.

Meanwhile, the Bucks County Association of Township Officials said the rate increases would harm 100,000 households in 31 municipalities, citing Aqua hikes in four other neighboring townships ranging from 57 percent to 82 percent. The Pennsylvania Municipal Authorities Association, representing some 2,600 authorities across the state, also stepped up to object to the sale, saying that customers are always the ones paying for the privatization and the profit made by the corporations that buy public utilities with rate increases.

Opposition groups prepared for a big rally on Sept. 6. But the day before, citing widespread community concern, the three county commissioners came out in unanimous opposition to the privatization deal, calling for the authority to end discussions with Aqua — the biggest blow yet to the company’s expansion plans. The rally turned into a victory celebration.

Despite this step forward, much damage has already been done. In Pennsylvania, a third of residents are served by private water companies — triple the national rate — and their bills average 84 percent more than those with public providers. Aqua hasn’t gone away; it has its eyes on other big prizes in the region: Delaware County and the city of Chester. It will have to deal with a citizenry that has been educated to the costs of privatization by folks like Bill Ferguson of Keep Water Affordable and David McMahon of NOPE, but it can still bring all the considerable power that comes with a company valued at $12.5 billion.

Hard on the heels of the loss in Bucks County, Aqua moved forward aggressively on another front, mailing campaign-like postcards to every household in nearby Delaware County asking residents to push their County Council to stop wasting money in litigation and move forward on their $276.5 million privatization plan.

The needs are certainly great. Federal funding for water systems, which peaked in the late 1970s, has fallen by 77 percent since then. The Environmental Protection Agency estimates a need for $744 billion over the next 20 years for maintenance alone. President Biden’s infrastructure bill, setting aside $55 billion to invest in water systems, is a start, but we have some hard thinking to do as a country about how to finance such needs.

We can learn from the global movement on remunicipalizing public services. The 1990s saw a wave of privatizations around the world, and at the World Water Forum in 2000, senior World Bank officials claimed that “there is no alternative” to privatization. Yet the consequences have turned out to be devastating. In Bolivia and South Africa, for example, extreme price hikes resulted in many poor people losing all access to water. Some nations have responded by enshrining water as a human right in their constitutions.

France, which has the longest history with privatization, saw companies making huge profits by raising rates and neglecting infrastructure maintenance. Ninety-four French cities have taken back control of their water supply since 2010. Even the big development banks are acknowledging that this initiative has resulted only in poorer service, higher fees and breaches of fundamental human rights, as well as widespread financial failures.

With the profit motive eliminated, the process of taking back municipal control has often led to significant improvements. For example, when Buenos Aires took back control from French water multinational Suez in 2006, the Argentine capital’s new public water company invested millions in improving infrastructure and expanded service to 700,000 water users.

The challenge of paying for our country’s water infrastructure is real. Aqua would have us believe that it has the problem under control. Yet pulling a public service out of the commons and into the market comes at a steep cost. Someone has to pay for the shareholder profits that the company exists to create. Bill Ferguson from Keep Water Affordable has a warning for all of us: “The Aqua Express is barreling down the tracks. This is not a train you want to get on. However, they’re not asking you if you want to get on the train; they’re trying to kidnap you.” Elizabeth Fleschar, whose service in Horsham has been privatized, is equally blunt: “We are a cash cow for Aqua.”

There is much to learn from these citizens of southeastern Pennsylvania about staying alert for the need to fight to keep our public services in the public. Long term, this will have to include building on initiatives like President Biden’s investment in infrastructure and other public financing options to address our common needs.

With climate change threatening the world’s supplies of fresh groundwater, it is becoming increasingly critical that we not lose meaningful control over access to clean water. As we work for public financing and control, we can join with others around the world who are rejecting the concept of water as a for-profit commodity and organizing to reclaim their access to water as a basic human right.