The Student Debt Crisis Is Exploding

Nothing Less Than A Student Debt Jubilee Will Do

The level of student loan debt in the United States has risen to $1.5 trillion, and defaults are at more than 40% of debtors and rising. Student loan debt has grown to overwhelm all other categories of non-housing consumer debt in this nation.

Underneath this crisis are rising tuition costs, a predatory student loan industry and an absence of consumer protections for students. Student debt is the only debt that can’t be removed through bankruptcy.

Governor Cuomo recently signed a new law that is supposed to help with the cost of higher education, and Senator Sanders introduced similar legislation at the federal level, but these are not real solutions to the crisis.

Alan Collinge, the founder of Student Loan Justice, says that these efforts will not relieve current students of debt, nor will they protect future students from acquiring debt. He anticipates that this crisis will explode within the next 12 to 18 months. Nothing short of a student debt jubilee will work. We discussed this issue in depth on Clearing The FOG. 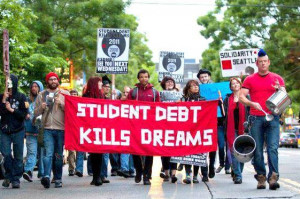 At present, these massive debts are crippling the lives of more than 40 million people. They are trapped in debt until death because in 2005 Congress, led by Joe Biden, a senator at the time, changed the bankruptcy laws so the debt would continue even after bankruptcy. In fact, student debt collectors can garnish wages, seize social security and take assets from estates to repay the debt. More than $1 billion has already been taken from Social Security to pay student debt.

Collinge writes about the human and economic impacts:

The human cost of this phenomenon cannot be understated. Families and individuals are being financially destabilized and wrecked. Family formation, home and other purchases are being delayed or cancelled, people are actually fleeing the country and even committing suicide as a result of this predatory debt.

Student loan debt was created by the rapidly rising costs of college and predatory lenders. As schools have lost public sources of funding over the past 50 years, they’ve turned to other methods of acquiring funds such as high tuition, room and board prices and assorted fees. This has been fed by rising amounts of money that students are permitted to borrow. Student loan officers are incentivised to encourage students to borrow large amounts without informing them of the disastrous risks they are taking.

Finance predators have been given a lot of power to collect student debts. In Texas, people who defaulted on student loans have had swat teams break down their doors and have been arrested for not paying. For-profit colleges have a history of targeting people living in desperately poor neighborhoods with student loans, even though they know the students will be unlikely to pay them back or even to graduate with a degree. 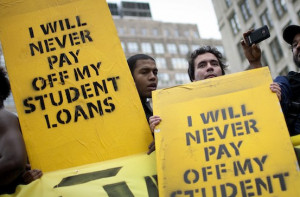 The result is that at present 27 million people are unable to pay back their loans and are in default or in arrears in some way. That is nearly 10 percent of the country unable to pay back their student loan debt and unable to declare bankruptcy. And, if a parent or grandparent co-signs the loan, they are in the same situation – with a loan that will follow them to the grave.

How student loan debt become the only kind of debt that cannot be relieved in bankruptcy.

Over the past forty years, student loans have become increasingly unprotected and predatory. If you follow former vice president Joe Biden’s senate career, you can map virtually every step of the process. Initially, legislators made it more difficult for students to be relieved of the debt in increments by requiring delays before a graduate could declare bankruptcy and stripping protections from particular types of student loans. By 2005, student ,loan debtors found themselves without any rights. Biden was the Democrat with a middle-class image who provided cover and political weight to these efforts on behalf of his largest contributor, MBNA, and the finance industry generally. 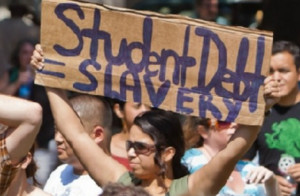 The Obama administration made the crisis worse. They moved student debt into the Department of Education so that now the government is profiting from it immensely. While Obama promised to reverse the Biden law that eliminated bankruptcy protection from student debt, his administration did nothing. DOE’s program is now run by people brought in from the loan industry and they fight to make sure protection of debtors does not occur because they make more money from defaults.

Despite its impact on tens of millions of people and the anchor it creates on the economy, the DOE makes sure that the various loan forgiveness programs put in place over the last decade, such as debt forgiveness for working for non-profits and income-related provisions, fail. Hundreds of thousands have already failed in these programs. The Obama administration became an enemy of those suffering from student debt.

During the presidential campaign candidate Donald Trump criticized the federal government from profiting from student debt. Trump said in his campaign speeches, “That’s probably one of the only things the government shouldn’t make money off — I think it’s terrible that one of the only profit centers we have is student loans.” He was right, the average student loan debt is $34,000. Interest alone on this amount is about $90 billion per year.  Unfortunately, President Trump has been silent on the issue and has done nothing despite the growing crisis. The DOE is making $50 billion in annual profits from student loan debt.

The other big profiteers are colleges and universities. As Collinge writes:

Not only have administrative salaries and capital improvements exploded at college campuses across the nation, their cash reserves (separate from their endowments) have ballooned over the past decade. Since the financial crisis of ‘08, the colleges have managed to build up reserves — aka slush funds — that could possibly be greater than the combined value of all college endowments. 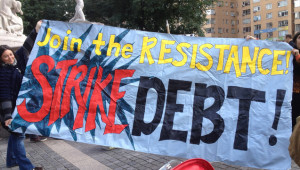 What is the student debt movement to do? Of course the Biden bankruptcy protections should be repealed but that is not enough. We need a complete student loan debt forgiveness program. These debts are ill gotten gains and should be forgiven. If the government refuses to forgive these debts, people must rise up together and refuse to pay any student loan debt.

The people have the power to end this injustice and must mobilize to do so. A student loan debt jubilee, whether mandated by law or put in place by the people, will bring economic freedom to tens of millions, end their debt servitude and allow them to participate in the economy. It will be a significant economic stimulus, but more importantly it will end an injustice.

Visit StudentLoanJustice.org and join one of the fifty state chapters. It is critical that we are ready when the crisis implodes to demand nothing less than a student debt jubilee.