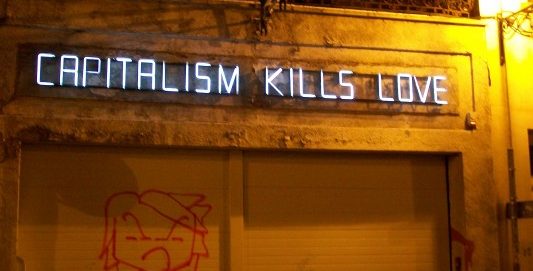 The Suicide Of Capitalism

#8220;Suicide” means, literally, killing oneself. Most often, suicide is voluntary. However, by definition, it can be involuntary as well, as in accidentally killing oneself while cleaning a loaded handgun (which apparently people do from time-to-time). Capitalism, the world’s dominant socio-economic system, is in the process of killing itself. Like the cleaner of a loaded hand-gun, capitalism thinks that there is absolutely nothing to worry about, that whatever it’s doing will result in no harmful outcomes, and that anyone who tells it not to do such a thing is a hoaxer of the worst order. Inadvertently killing oneself with a loaded handgun is bad enough. What capitalism is doing of course is far worse. Not only will it kill itself as a system, but it will likely take our species along with many others right along with it.

Most readers of these pages are familiar with the mountain of data dealing with global warming/climate change and its increasingly negative projected outcomes. As the cited article by Justin Gillis says: “Failure to reduce emissions, the group of scientists and other experts found, could threaten society with food shortages, refugee crises, the flooding of major cities and entire island nations, mass extinction of plants and animals, and a climate so drastically altered it might become dangerous for people to work or play outside during the hottest times of the year.”

Currently, 2100 has been cited as the “tipping point” year, if no major policy changes in terms of carbon (to say nothing of methane) emissions are undertaken. However, a recent projection by the organization Green Physicists moves the “tipping point” year up to 2050. By then they estimate that: atmospheric carbon dioxide levels will have risen to twice the pre-industrial level; the global average surface temperature of our planet will have increased 2.5 degrees Centigrade [the current projected “tipping point” for irreversible catastrophe is 2.6 Deg. C.]; the temperature rise in the Arctic has been about twice that of the global mean, so that the permafrost has been melting rapidly, with the release of enormous quantities of methane (which adds to the global warming effect of CO2); the Greenland ice sheet will be virtually gone, with a likely resulting sea level rise of more (39″); and so on and so forth.

As Naomi Klein has recently documented very well, capitalism is the ultimate cause of global warming/climate change. But why refer to the projected outcome as “suicide?” Karl Marx described capitalism as sowing the seeds of its own destruction. By this he meant that capitalism, dependent upon masses of workers to produce the surplus value upon which capitalist growth depends, will necessarily produce class-consciousness among the workers. They then will eventually organize themselves to seize the means of production and turn its power to the benefit of all. But that’s not suicide. That is revolutionary disappearance, at the hands of the working classes. What is happening now is rather different.

By its very nature, operating to the greatest degree possible with no thought to anything other than the accumulation of profit, capitalism is leading to this possible outcome. When the critical resources are gone, or at least the supply is reduced to such an extent that their cost makes making profit from their exploitation increasingly difficult, capitalism will die, even without workers’ revolution. Indeed, by its very nature of focusing exclusively on profit-making, it will eventually kill itself, as well as taking many humans and many other species along with it. According to a recent report in Nature, 41 percent of amphibians, 26 percent of mammals and 13% of birds are threatened with extinction, if nothing is done about global warming (and do notice the source of that story. Yes, the Catholic Church is changing, before our very eyes.) But the point here is that even without global warming, with no controls on the utilization of natural resources other than fossil fuels, capitalism is essentially killing itself.

And so, what is to be done? There is of course hope. While it may be too late to slow carbon emissions down enough to prevent reaching the “tipping point,” as some scientists (quoted above) think, it may very well be possible to develop a series of environmentally safe methods for capturing carbon and methane, shielding the earth from the increasing heat levels, and so on and so forth. It is definitely possible to institute economic planning on a massive scale to conserve and re-use natural resources that will otherwise run out. But that will require the replacement of capitalism with some form of socialism.

What form that system might take and how we will get there are matters for further consideration. But given historical experience and an analysis of how capitalism has dealt with the socialist experiments that have come along so far (see, e.g., The 75 Years War Against the Soviet Union), we will not get there spontaneously, we will not get there without the formation of a series of leading parties, around the world. If that series of events does not occur, then indeed capitalism will commit involuntary suicide with disastrous results for ours and many other species. It will indeed vault us into a full-blown “Sixth Extinction.”