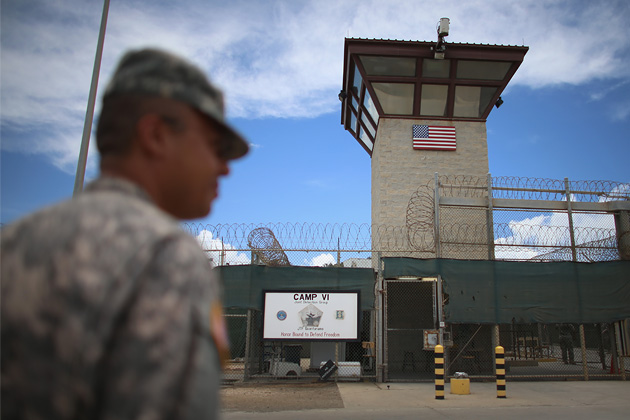 The Terror Suspect Who Had Nothing To Give

Above photo: A military officer stands near the entrance to Camp VI at the U.S. military prison in Guantanamo Bay, Cuba, in 2013. Abu Zubaydah remains imprisoned at Guantanamo as an “enemy combatant.” (Joe Raedle/Getty Images)

“I would be strapped to a board by my arms and legs and by my waist (which was very painful because of my wound.)

Guards with black costumes, masks and black goggles strapped me in. My mouth and nose and eyes were covered by a cloth.

The board — and my body — were placed horizontally. My head was immobilized by a board. Someone poured over the cloth, which entered my mouth and nose. I could hear one water bottle empty out by the gurgling noise it made; I hoped that would end the process, then I heard another bottle start to pour.

Water would enter my lungs. I felt like my whole body was filled with water; even my eyes felt like they were drowning. I experienced the panicked sensation of death and my body convulsed in terror and resistance.

“I thought ‘I will die. I will die.’ I lost control of my functions and urinated on myself. At the last possible moment, I instantly vomited water violently but at the same time was still panicked and desperate for air.”

In 2009, Abu Zubaydah’s lawyers interviewed their client and prepared a handwritten, first-person account of the torture their client suffered at the hands of the U.S. government.

The document, quoted above, recounts the terrifying experience of a man repeatedly waterboarded in the mistaken belief that he was al-Qaida’s No. 3 official. It was filed in federal court as part of his lawsuit seeking release from Guantanamo, and like nearly all the documents in the case, was sealed at the government’s request.

Now, seven years later, Zubaydah’s statement, which he signed under oath, has been released, and it provides the most detailed, personal description yet made public of his “enhanced interrogation” at a Central Intelligence Agency “black site” in Thailand.

The United States waterboarded Zubaydah 83 times. According to his statement, he was also hung from hooks, “shackled to a chair naked in freezing temperatures,” and bombarded with loud noises that kept him awake for days.

While shackled and being screamed at, he was forced to stand naked in front of a woman. “When I refused to talk with a woman present, [name blacked out] beat my head against the wall repeatedly.”

In between waterboarding sessions, he was placed in what he called a “dog box,” a wooden container that was about 2 ½ feet long, 2 ½ feet wide and 2 ½ feet high.

“The pain in the small box was unbearable,” he said in his declaration. “I was hunched over in a contorted way and my back and knees were in excruciating pain. I began slamming my body and shackled arms against the inside and screaming for help and tried to break the door. The wound in my stomach and leg opened up and I started bleeding; yet I didn’t care: I would do anything to stretch my leg and back for 1 minute.”

At night, he was placed in a slightly larger, coffin-like box.

His interrogators screamed questions and at times he pleaded: “tell me what you want me to say, I will say it! “ At other times, “I just said things that were false and that I had no basis to know or believe simply to get relief from the pain.”

Zubaydah was captured in Pakistan in March 2002. Senior government officials, including President George W. Bush, immediately boasted that they had seized “one of the top three leaders of al-Qaida.”

Years later, the government admitted it had been mistaken about Zubaydah. In a court filing, it said Zubaydah had no involvement or advance knowledge of 9/11, knew nothing about future plots against America, and was not even a member of al-Qaida or the Taliban. He nonetheless remains imprisoned at Guantanamo as an “enemy combatant.”

The case of Abu Zubaydah is part of a contentious political debate about the morality and tactical value of waterboarding. Donald Trump, the presumptive Republican presidential nominee, has said he approves of the technique, among others, to obtain information from terror suspects. The former director of central intelligence, Michael Hayden, said the agency would never do it again and that it would tell any future president: “If you want somebody waterboarded, bring your own damn bucket.”

In his statement, Zubaydah says a person visited him while he was still in one of the agency’s secret prisons and apologized for the false accusations and his horrific treatment.

The two men “got into a political discussion about my beliefs and my desire for a Palestinian homeland, my opposition to violence against civilians and that I had no interest in hurting Americans or fighting against them,” Zubaydah recounted in his statement.

“He understood this. During this conversation he admitted to me that the U.S. was wrong about me. He said he had no problem doing what he did to Khalid Sheik Mohammed,” a confirmed mastermind of the 9/11 attacks who was also waterboarded. “But he was very sorry about what had been done to me, because I was not the person they once thought I was.

“At one point in this conversation,” he said that this person, whose name was blacked out, “became emotional and became unable to speak; he removed his glasses and wiped his eyes.”

The questioning of Abu Zubaydah has been previously described in news reports and in the Senate Intelligence Committee’s Report on Torture, which was released in 2014. Just last month, in response to a lawsuit by the ACLU, the government released a full transcript of a military hearing in which Zubaydah described, in halting English and through a representative, some aspects of his time in the CIA’s hands.

His 12-page statement offers a fuller, more chilling account of what he endured. It was released Monday in response to a motion filed on behalf of ProPublica by the Media Freedom and Information Access Clinic at Yale Law School, which seeks full access to the court records in Zubaydah’s case.

The government has released some documents as a result of that request but many were heavily redacted. The copy of Zubaydah’s statement, for example, obscured the names of the individuals who conducted the interrogations.

The government is still withholding a substantial number of documents, including the CIA’s record of Zubaydah’s medical treatment, and copies of drawings he made depicting his torture, 100 pages of his personal diary, poems, letters to his mother and communications with his lawyers, who have spent hundreds of hours with him over many years.

Taken together, that material would “refute the image that he is the monster the government has painted,” said Joseph Margulies, one of his lawyers, a professor of law and government at Cornell. “They reveal his humanity,” said Margulies, who is barred from talking about the specifics of the still-sealed documents.

Abu Zubaydah is the nom de guerre for Zayn al Abidin Muhammad Husayn. He was born in Riyadh, Saudi Arabia, on March 12, 1971, but grew up in the West Bank, where he was part of the Palestinian uprising. In the late 1980s, he went to Afghanistan to fight the Soviets, which put him on the same side as the CIA. He sustained a serious head injury as the result of an exploding mortar shell in 1992, leaving him unable to speak for almost a year. He still suffers from the injury.

The Senate torture report chronicled the CIA’s interrogation of high-profile detainee Abu Zubaydah, but the justice system’s treatment of his habeas corpus petition has largely escaped notice. Read the story.

After the Soviets withdrew, Zubaydah stayed on, working at the Khalden camp, where men from the Middle East and North Africa came for training before returning to wage jihad against the Russians in Chechyna, the Serbs in Bosnia, the Israelis in Palestine. Osama Bin Laden sought to close the camp, and bring all the mujaheddin into camps under his control.

After 9/11, Zubaydah fled to a safe house Pakistan, where he was captured, in March 2002, in a joint CIA-FBI-Pakistani operation. Zubaydah, who has said he was unarmed, was shot in the groin, thigh and stomach. Bush and other senior administration officials said he was bin Laden’s chief of staff, that he was one of the highest-ranking members of al-Qaida, and that he was plotting more attacks on Americans.

Drugged, trussed and blindfolded, Zubaydah was flown to a secret site in Thailand, where he became a guinea pig for the CIA’s “enhanced interrogation techniques.” He was the first al-Qaida suspect questioned under the Bush Administration’s expanded authority.

He insisted that he wasn’t a member of al-Qaida and knew nothing about 9/11. “Nobody in Washington believes you,” he writes that he was told after the fourth day of waterboarding.

In his statement, Zubaydah speaks with surprising equanimity about his questioners whose names are redacted.

“Over time, they became more civil with me and tried to greet me politely and ask how I was doing,” he writes. “I think they finally realized they were wrong about me, and that they finally accepted the truth about me. In fact, (redacted) told me this later, and (redacted) did too.”

“He sort of smiled to acknowledge my point and nodded his head; he said, ‘well your case was a mistake.’”

In spite of all the admissions and informal apologies, Abu Zubaydah remains a prisoner at Guantanamo. In July 2008, he filed a petition for habeas corpus in federal district court in Washington, D.C., seeking his release.

For eight years, the case languished, assigned to Chief Judge Richard W. Roberts, who declined to rule on virtually every motion filed by the defense. Roberts stepped down earlier this year — amid sexual assault allegations. The case has been assigned to Judge Emmet G. Sullivan.