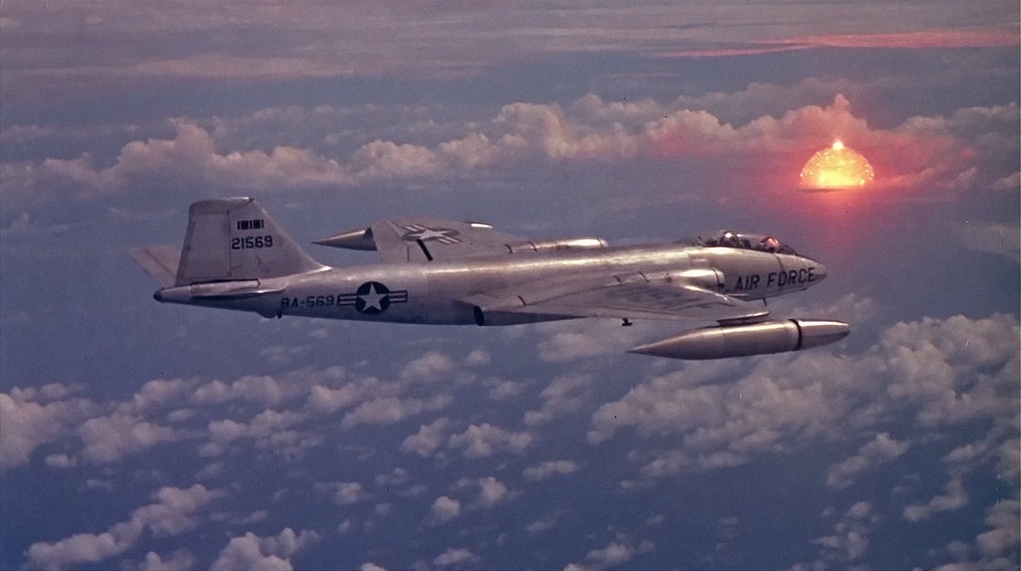 The Time To Prohibit Nuclear Weapons Is Now

Above Photo: An aerial view of a nuclear weapons test in the United States in the late 1950s known as Operation Hardtrack I. Creative Commons.

With the U.S., U.K. and Australia (AUKUS) submarines deal having greatly offended their NATO ally France, NATO is vulnerable to internal disarray and is seen to be fraying.

Dr. Helen Caldicott, who has spent decades working for a nuclear weapons-free world, recently wrote a blunt op-ed with an unforgettable headline: “With All Its Wisdom, the Human Race Is Killing Itself.”

Decrying the arms industry and the nine countries that now own nuclear weapons, Caldicott points to the one trillion dollars per year that the U.S. spends on “national defense,” and states that if we can’t learn to live in peace, we are doomed.

At least 56 nations (“state parties”) have come to the same conclusion and have now signed the new UN Treaty for the Prohibition of Nuclear Weapons (TPNW), which came into force in January 2021. Even though the Trudeau government claims it is committed to disarmament, it refuses to sign the treaty, citing its NATO membership (NATO opposes the treaty).

New polling results, however, could have an impact on the Liberals’ position, given its tenuous hold on minority governance.

An April 2021 national survey conducted by Nanos found that a “strong majority of Canadians support (55 per cent) or somewhat support (19 per cent) Canada signing and ratifying the new United Nations Treaty on the Prohibition of Nuclear Weapons.”

Further, about three in four Canadians “agree (51 per cent) or somewhat agree (23 per cent)” that Canada should join the TPNW “despite pressure it may face from the United States not to do so.” Importantly, a “strong majority of Canadians think the world should work to eliminate nuclear weapons (80 per cent).”

The NDP, the Green Party, and the Bloc Quebecois have all called on Canada to sign the treaty.

A similar survey conducted in late 2020 in six NATO states found overwhelming support for the TPNW. YouGov polls conducted in Belgium, Denmark, Iceland, Italy, the Netherlands and Spain found that more than 75 per cent of respondents think their country should join the TPNW. Belgium, Italy and the Netherlands all play host to U.S. nuclear weapons on their soil. According to the International Campaign to Abolish Nuclear Weapons (ICAN), “Notably those polled still overwhelming supported joining the TPNW even if their country would be the first NATO country to do so and they would face U.S. pressure not to.”

Under the terms of the new treaty, signing nations agree to “never under any circumstances…develop, test, produce, manufacture, otherwise acquire, possess or stockpile nuclear weapons or other nuclear explosive devices.” The treaty also makes it illegal to transfer nuclear weapons, position them in another country, or threaten to use them, and it provides for victim assistance, environmental remediation, and other forms of cooperation.

According to Jon Letman, opponents to the TPNW “see the treaty as too drastic, ineffective and as undermining nuclear deterrence policies.” Proponents argue that:

“Leaving questions of nuclear security and disarmament to the exclusive purview of diplomats and so-called experts underplays the humanitarian and environmental risks and consequences of nuclear weapons.”

This is playing out while the U.S. in 2020 increased its spending on nuclear weapons to $37.4 billion – more than twice what Russia and China spend combined.

Moreover, as Dr. Helen Caldicott has pointed out, the U.S. is “increasingly using artificial intelligence to launch and control” its lethal weapons. This decision is simply insane, given the dozens of times there have been false warnings of an imminent attack, caused by things like a failed computer chip, or a flock of geese. Only the wise and brave decision by a military underling – whether in Russia or the U.S. – to disobey the automatic warning and defuse the situation has prevented global catastrophe.

So far, the U.S. refuses to do this, while at the same time the U.S. is the only nation that refuses to pledge a “no first use policy” for its nuclear weapons.

Former U.S. Secretary of Defense William Perry recently stated, “The likelihood of a nuclear catastrophe is greater today than during the Cold War, and the public is completely unaware of the danger.”

But increasingly, the public actually is aware of the danger, and that is why so many are pushing their governments to ratify the Treaty for the Prohibition of Nuclear Weapons.

Many have also been asking their governments to reconsider membership in NATO, which has been encircling China and Russia with increasingly belligerent moves.

More than a year ago, the Canadian Foreign Policy Institute initiated an open letter to Trudeau, asking “Should Canada continue to be part of NATO or instead pursue non-military paths to peace in the world?” The letter was signed by dozens of Canadian groups and thousands of individuals.

Now, with the U.S., U.K. and Australia (AUKUS) submarines deal having greatly offended their NATO ally France, NATO is vulnerable to internal disarray and is seen to be fraying. Peter Ricketts, a former U.K. ambassador to France, told the BBC: “For the French this looks like a complete failure of trust between allies and calls into doubt what is NATO is for. This puts a big rift down the middle of the NATO alliance.”

The public should be pushing for Canada to sign the Treaty for the Prohibition of Nuclear Weapons immediately and then open a discussion about leaving NATO. The timing will likely never be better.