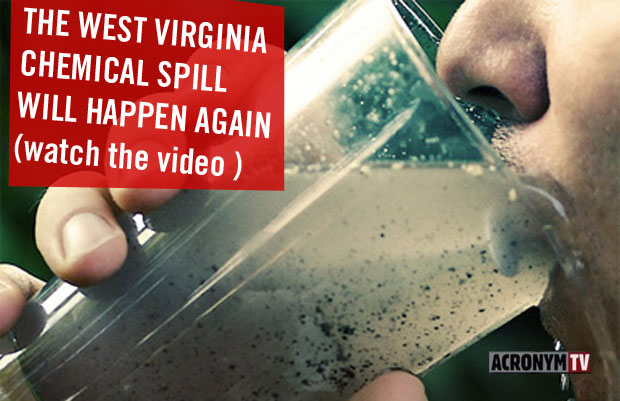 When a massive chemical spill happens that contaminates the water supply and leaves over 300,00 people in West Virginia without water to drink, bathe or even brush their teeth –  when a dangerous event that throws a whole area of the country into an existential crisis happens, one wants to believe that state and local officials in every part of the country are paying close attention to learn from this crisis to see to it that it be averted in their communities. I mean, there is no way that a corporation, Freedom Industries in this case, would be allowed to handle a toxic foaming agent used as part of the coal preparation processing unless their facility was in tiptop shape, unless the plant processing these toxic chemicals could have the adjective “good” ascribed to it.

This is America, where choosing between corporate profits or the needs of the people are a simple choice, one that gets made over and over again: profits trump people.

In an area also knows as “Chemical valley” this is third major chemical accident in the region  in the last five years, and as the toxic chemicals dilute themselves in the river and as more and more voices of authority tell people that their water is safe, those safety assessments will be made, according to Robert Reich’s recent article entitled Fear Is Why Workers in Red States Vote Against Their Economic Self-Interest, “partly because the government’s calculation for safe levels is based on a single study by the manufacturer of the toxic chemical, which was never published, and partly because the West Virginia American Water Company, which supplies the drinking water, is a for-profit corporation that may not want to highlight any lingering danger.”

The title and content of the Reich article implies that the political will of the people may actually align with the will of the toxic spewing corporations in this case because, well, it all boils down to Jobs.

Maya Nye, president of People Concerned About Chemical Safety, a citizen’s group formed after a 2008 explosion and fire killed workers at West Virginia’s Bayer Crop Science plant in the state, as she explained to the New York Times: “We are so desperate for jobs in West Virginia we don’t want to do anything that pushes industry out.”

This might explain, according to Reich, “why Republican officials who have been casting their votes against unions, against expanding Medicaid, against raising the minimum wage, against extended unemployment insurance, and against jobs bills that would put people to work, continue to be elected and re-elected. They obviously have the support of corporate patrons who want to keep unemployment high and workers insecure because a pliant working class helps their bottom lines. But they also, paradoxically, get the votes of many workers who are clinging so desperately to their jobs that they’re afraid of change and too cowed to make a ruckus.”

If rocking the boat and causing a ruckus can be defined by voting for Democrats, let us take a quick look  at President Hope and Change as an example. Obama openly pursues an all of the above energy policy that is expediting the process of climate change that will make human life on earth uninhabitable; his administration has pushed for fast track authority to ram the Trojan horse of a trade deal that is so much more of a trade deal known as the Trans Pacific Partnership through congress without public debate that would, not only gut jobs, it would make our nation’s laws subservient to the terms and conditions of an agreement hammered out by the global elite, and advisors multi national corporations.

If getting on that train is Reich’s idea of making a ruckus, than I fear we will require a whole new thesaurus to come up with the language that will get the human species in general and occupants of the Unites States specifically safely off the runaway roller coaster that is propelling us towards greater inequity, increased environmental destruction and increased corporate profit at the expense of the people. The Democrats and the Republicans both have their hands on the same wheel, their feet on the same pedal.

A ruckus simply won’t cut it.