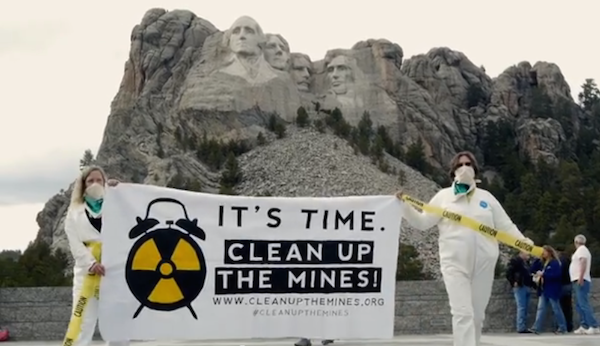 Thousands Of Abandoned Uranium Mines Are Poisoning Us. Take Action.

The nuclear industry is a many-headed toxic beast – nuclear power and nuclear weapons are just the most visible ones. Mining, milling, processing, reprocessing, manufacturing, and transporting nuclear materials are some other heads of the beast that are less visible. All are desecrating Mother Earth and killing her peoples. It’s time to deal with the initial stage of this problem. We can begin by cleaning up the abandoned uranium mines and placing a National Environmental Security Moratorium on all uranium extraction.

Irresponsible corporations and negligent government agencies have abandoned more than 10,000 toxic uranium mines throughout the US. These hazardous mines poison our air, land and water and harm public health. Currently no laws require cleanup of these dangerous sites. A new campaign, Clean Up The Mines!, aims for remediation of these mines through federal legislation and action, and public education.

The Environmental Protection Agency and US Geological Survey document over 10,000 abandoned uranium mines in the US, most in 15 western states on public, private, and tribal lands. Over 4,200 of these mines produced uranium that was sold to the US Atomic Energy Commission for use in nuclear weapons from the 1940s through the 1970s. Starting in the 1960s, much of the mining was done to provide fuel for nuclear power plants.

There are several AUMs in and near the Grand Canyon, 169 of them within 40 miles of Mt. Rushmore, and eight right on the edge of Grand Teton / Yellowstone National Parks. One in seven (10 million) people in the western US lives within 50 miles of an AUM.

The Mining Act of 1872 governs hard rock mining (including uranium mining) on federal lands. Since enactment 142 years ago, the law has never been substantially modified. It was passed to encourage settlement and development of the western US, and current government interpretation specifies that the highest and best use of federal land is mining.

Seventy-five percent of the AUMs are on federal and tribal land. There is no royalty paid for mining on federal lands and no environmental protection or cleanup requirements. Many of the companies who owned the land or operated the mines no longer exist, others have illegally spun off these toxic ‘assets’ into now-bankrupt companies. The result? The people must pay the billions or trillions of dollars to restore most of these sites.

There is also no federal set of best practices or standards for cleanup. As a result, most of the EPA-directed cleanup efforts are nothing more than toxic landscaping.

Physical hazards of AUMs come from unmarked, unprotected mine entrances, cliffs, falling rocks, and collapsing buildings and equipment. Wind picks up radioactive dust from rock piles and blows it for miles – people breathe fine particles into their lungs, resulting in much higher levels of lung cancer near AUMs. People carry the radioactive dust, dirt, and mud around on their clothes and shoes, spreading the contamination to their homes and families.

One of the decay elements of uranium is radon gas. It seeps up through the ground in many areas around mine sites where people and animals breathe it in. Exposure to radon gas is the second leading cause of lung cancer in the US.

Water picks up radiation in a variety of ways – rain washes radioactive dust from the air and rocks and carries it into streams and rivers. Surface and underground water dissolve uranium from rock and dust. This is particularly true of uranium that has been exposed to oxygen, which changes it from UIV to UVI, which is more soluble in water. (This is the principle used in ‘In Situ Leaching’, similar to fracking techniques, the method most commonly used now.) The result is polluted rivers, lakes, and aquifers, with no safe available drinking water for thousands of communities.

Pools and lakes of contaminated water contribute to bringing radioactivity into the food chain. Cattle and wild animals can drink this toxic water, concentrating radiation in their organs which is called bio-accumulation. Plants in areas surrounding AUMs take up the radioactive waste as well. Whether grown for crops or eaten by animals, the radiation continues to bio-accumulate and spread.

On the Spokane Indian Reservation in Eastern Washington State, there are two lakes collecting water from AUMs that are so acidic that if you dip a spoon in, it will melt. Uranium often occurs with other toxic heavy metals, and over time, as contaminated water flows out of the AUM and into a lake, evaporation and replenishment by more contaminated water gives an extreme concentration of toxic and radioactive heavy metals.

The EPA has estimated that mining has polluted 40% of the headwaters of western watersheds.

People living near AUMs face increased rates of cancer, diabetes, kidney disease, hypertension, thyroid disease, autoimmune diseases such as arthritis and lupus, and birth defects. Because so many of these mines are on or near indigenous lands, the genocide of the Indian peoples continues. In many indigenous communities no safe drinking water is available. The EPA has closed 22 wells on the Navajo Nation due to unsafe levels of radioactivity.

A CleanUpTheMines! team visited Mt. Rushmore as part of our Earth Day launch of the campaign. The Geiger counter measurement at the national monument’s main viewing area was 30 microrems per hour, higher than normal because of the 169 AUMs within 50 miles of the monument. Millions of tourists unknowingly face exposure to this toxic threat by breathing radioactive dust and radon gas.

In Riley Pass, one of the largest AUMs in South Dakota, the deadly effect of the mine was apparent. As the group approached the bluff, the tree line ended abruptly at the edge of the mine. Although Riley Pass is designated as a Superfund site, signs of water runoff from the AUM were visible, no barriers or fences prevented people or animals from accessing parts of this hazardous site. This is a site where toxic landscaping was done, leaving very high levels of radioactivity to poison the water and soil of the area.

At the small community of Ludlow, the group measured radioactivity with a Geiger counter at an elementary school playground that was 44 microrems/hour. This is the equivalent of more than 150 Counts Per Minute (CPM), over the 100 CPM threshold, which means it cannot be attributed to background radiation and is not safe. A private abandoned, open-pit uranium mine about 200 meters from the school emits 1170 microrems per hour, more than four times as much as being emitted from the Fukushima nuclear power plant in Japan. This is only one abandoned, open-pit uranium mine in the middle of the US.

Charmaine White Face, a scientist and coordinator of Defenders of the Black Hills, facilitated the campaign launch event. “For the American public to be exposed to radioactive pollution and not be warned by federal and state governments is unconscionable,” stated White Face. “Shame on the American federal and state governments for allowing their citizens to be placed in such danger for more than 50 years and not stopping the source of the danger. It is a national travesty.” She noted that according to her doctor, thyroid cancer rates are 10 times higher than the national average in western South Dakota. Margaret Flowers, MD, said, “The mines are a silent health threat. Millions of people are at risk of breathing or ingesting radioactive particles that travel through the air and water and settle in soil where they enter our food system.”

In every community we visited, we heard that people are dying of cancer and have other serious diseases caused by the radioactive contamination. They are very concerned over the lack of information about AUMs and lack of action to remediate them. Babies are born with severe, multiple birth defects. When we visited Red Shirt Village in southeast South Dakota, we heard from Dennis Yellow Thunder, Natural Resources Technician for the Oglala Sioux Tribe Natural Resources Regulatory Resources Agency. His family, including his daughter, used the water for drinking and bathing. His granddaughter was born with multiple birth defects. “If we don’t defend our sacred water it will be the end of us all,” he said, “We must support this campaign to clean up the mines. We need to protect this land, our water and the sacred Black Hills. We need to do it from our heart.”

The water serving this area is heavily contaminated with ‘technologically enhanced’ uranium (from mining and milling waste rather than how it occurs naturally in the ground) and even more with thorium, the first element in decay of uranium. “Without water, nothing can exist”, said Charmaine White Face.

In Buffalo, 20 miles from Ludlow, 12 people (out of about 600 living nearby) now have brain tumors. Experts from Mayo Clinic said the only way people get these are from breathing uranium. Copper sulfate is being fed to cattle so that their fur will be brown or black instead of gray from the radiation. Sheep can’t live there because their immune systems won’t tolerate the radiation. Most ranchers can’t afford to move from this toxic area.

Sandra Cuny Buffington, a rancher who resides in Red Shirt community, maintains a herd of cattle in the Bad Lands. She lived at the river until it wasn’t possible any more because of contamination. She spoke of high rates of cancer in the area: “We know we are contaminated but where are we going to go? I don’t know of any other life than the one that I have lived. As crazy as it sounds, you learn how to live with it.”

Clean Up the Mines! was established by Defenders of Black Hills and Popular Resistance to pass The Uranium Exploration, Mining Accountability and Moratorium Act (Abandoned Uranium Mine Cleanup Act) of 2014. The Act will:

* maintain a complete inventory of all existing abandoned uranium mining and exploratory sites;

* place a National Environmental Security moratorium on any processing or approval of new permits for uranium exploration, mining, and in-situ leach operations until the Action Plan is completed;

* institute a program of public education on the dangers of abandoned uranium mines; and

From July 21–23, the Clean Up the Mines! team visited congressional offices and supporting organizations in Washington, DC. Rep. Grijalva (Democrat, AZ) is supporting the initiative and other members of congress have pledged their support.

You can learn more about the campaign and what you can do to help Clean Up The Mines! at www.cleanupthemines.org. Please contact your senators and representatives and encourage them to support the Abandoned Uranium Mine Cleanup Act and to contact Rep. Grijalva’s office.

If you can host an event to educate people about abandoned uranium mines, please contact us at cleanupthemines@gmail.com.

Some of our short videos are available on our youtube channel − here’s a web shortcut: tinyurl.com/cleanupthemines