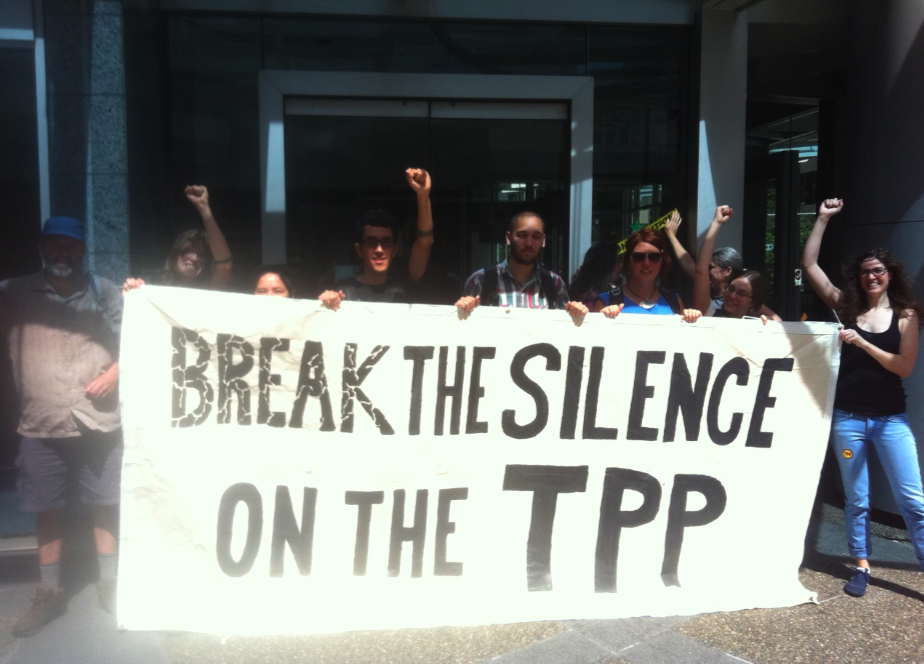 The Trans-Pacific Partnership is an Assault on Democracy

Ron Kirk former US Trade Representative: making the text public would raise such opposition that it could make the deal impossible to sign.

There is a battle building between the people of the planet and transnational corporations.  The battleground is the Trans-Pacific Partnership.  It is a battle the people can win if we act in solidarity.

The Trans-Pacific Partnership is a global corporate coup that makes corporations more powerful than governments and undermines our national sovereignty.  While the public and media are not allowed to see the text, and members of Congress only receive limited, heavily restricted access, 600 corporations have been advising the president and suggesting amendments as they have full access to the documents.  This includes some of America’s worst corporate citizens: Monsanto, Walmart, Bank of America, JP Morgan, Phiser and big Pharma, Cargill, Exxon-Mobil, Chevron among them.

The Green Shadow Cabinet is putting forward a critical, in-depth analysis of the Trans-Pacific Partnership (see links below).  Top people in their fields – movement leaders, academics, researchers and activists – are writing about specific aspects of the TPP and how it affects virtually every aspect of American life.  The Green Shadow Cabinet is about half way through its analysis with more statements coming over the rest of the week and into the next two weeks.  This is the type of in-depth analysis we need from people informed on the topic so that the public becomes informed and joins the campaign to stop the TPP.

Some members of Congress are making their way through the bureaucratic process that allows them to see the text, but does not allow their staff to do so, nor does it allow elected officials to make copies, take notes with paper or computer; and they are not allowed to share it with their constituents.  It took Rep. Alan Grayson (D-FL) six weeks of negotiation with the US Trade Representative to finally got to review the text on June 17th.  He was only allowed to see an edited version of the text and was not allowed to bring any staff with him.

Grayson told the Huffington Post that the Obama administration classifies the documents to prevent discussion of the contents, “They maintain that the text is classified information. And I get clearance because I’m a member of Congress, but now they tell me that they don’t want me to talk to anybody about it because if I did, I’d be releasing classified information.”

While we appreciate Grayson for going as far as he has, Members of Congress need to break the silence and share the contents with the American people.  From what has been leaked, the TPP will give corporations control over every aspect of our lives and make them more powerful than governments.  This non-transparent approach to something so far-reaching is an assault on US democracy.  As Senator Elizabeth Warren said when questioning the new Trade Representative:
“I have heard the argument that transparency would undermine the Trade Representative’s policy to complete the trade agreement because public opposition would be significant,” Warren explained. “In other words, if people knew what was going on, they would stop it. This argument is exactly backwards. If transparency would lead to widespread public opposition to a trade agreement, then that trade agreement should not be the policy of the United States.”

Grayson pointed out the irony and hypocrisy of the Obama administration’s approach: “What I saw was nothing that could possibly justify the secrecy that surrounds it. It is ironic in a way that the government thinks it’s alright to have a record of every single call that an American makes, but not alright for an American citizen to know what sovereign powers the government is negotiating away.”

1. Release the text that has been agreed on.

2. Release the proposals they are making in our names.

If you want to join the campaign to stop the TPP sign up at www.PopularResistance.org.

Below are excerpts from the statements released so far by the Green Shadow Cabinet, to get the full statement click on the headline.  Visit the website for more statements in coming days. The first statement was signed by the full cabinet and it is a call for solidarity for all those concerned with economic and social justice as well as protecting the planet from ecological collapse to join together to stop the TPP.

The Green Shadow Cabinet stands united in opposition to the proposed Trans-Pacific Partnership (TPP), and is committed to defeating this Obama administration effort to enrich and empower global corporations at the expense of people and planet.

Today, all five branches and 81 members of the Green Shadow Cabinet begin to act in concert to not only defeat the TPP, but to show America that another government with another global economic agenda is possible. There is an alternative to the corrupt political establishment that produces economic terrors like the TPP. Our Cabinet is proof of that alternative.

“FDA warning:” The TPP is a threat to your health and safety

The role of the U.S. Food and Drug Administration is to protect and promote public health by strengthening programs and policies governing both the safety of the U.S. food supply and accessibility to safe and effective medical products, including pharmaceutical drugs. The Trans-Pacific Partnership (TPP) threatens to undermine the FDA’s ability to carry out that mission, in a number of important ways, as described here.

The Rule of Law demands corporations be subordinate to government

The Trans-Pacific Partnership is a global corporate coup that undermines democracy and makes corporations more powerful than government.  It creates a “trade tribunal” system that allows corporations to sue governments for expected lost profits resulting from environmental, labor, health, consumer protection and other laws. The judges in the tribunals will be corporate lawyers on temporary leave from corporate job in order to rule on cases brought by corporations and then returning to their corporate job.  This rigged rule of law system will prevent countries from acting in the public interest and for the protection of the planet.  The TPP undermines the rule of law.

Why the TPP is all about corporate power, not trade

By David Cobb, President’s Commission on Corporations and Democracy

The Trans-Pacific Partnership (TPP) — just like the North American Free Trade Agreement (NAFTA), the World Trade Organization (WTO) and every other so-called “trade agreement” — isn’t really about trade at all.

Whether it is framed as “free trade” as touted by conservatives or “fair trade” as promoted by liberals, the real question is about who gets to make decisions about how goods, services (and now money itself) flows between international borders.

Control over food is at stake with the TPP

The agriculture section of the Ecology Branch of the Green Shadow Cabinet opposes the Trans-Pacific Partnership (TPP) as the latest Free Trade Agreement (FTA) assault against food sovereignty, where the profits of multinational companies are placed ahead of the food security needs of individual nations. The TPP seeks to revive the stalled expansion of the World Trade Organization.

TPP: Global nightmare for democracy, workers rights and the 99%?

U.S. trade pacts must clearly protect the right of workers to organize and form unions to protect their jobs, health and safety and communities in which transnational corporations operate. It is only strong worker protections that can prevent such tragic situations from occurring that we have seen in the Union Carbide factory explosion in Bhopal, India that killed thousands in 1984; the recent tragedies in Bangladesh — the building collapse in April and the fire that killed more than a thousand workers in November, and the untold numbers in the U.S. and worldwide who have been victims of cancer alleys created by the oil, chemical, energy and agribusiness industries.

The desire of the Bush and the Obama administrations to pass the TPP is apparently an effort to create a coalition of nations to match China’s exploding economy and increased military and political influence in the region.  On Nov 12, 2011, Obama spoke before the Summit of the Asia-Pacific Economic Cooperation Forum and stated that, “… we’ve turned our attention back to the Asia Pacific region.” This is being accomplished through two vehicles:  the TPP and the “Pivot to Asia,” meaning a redeployment of American priorities and military forces away from Europe and the Middle East to Asia.  Also in the same month, this time speaking before the Australian Parliament, Obama said: “As a Pacific nation, the United States will play a larger and long-term role in shaping this region and its future.” The United States now has 320,000 troops in the Pacific region, and the Pentagon has promised there will be no reductions as troops are drawn down in Afghanistan and other parts of the world.

The Trans-Pacific Partnership would increase poverty

The much touted, at least by multinational corporations and some governments, Trans-Pacific Partnership (TPP) agreement, has grave consequences for the so-called poor of the world, including those in the United States. This agreement, clouded in secrecy, has been characterized as something akin to “NAFTA on steroids!”  But, what exactly does it mean for the poor and working class of the United States?

With TPP, Obama has moved from transparency to secrecy, from human rights to corporate rights

Suppose a Taiwanese company wanted to open a factory in California to make clothing. They propose importing workers who would accept a daily wage of $10, would not spend any money in the plant to meet U.S. occupational health and safety regulations, and would be rabid in opposing workers’ attempts to meet collectively to discuss their grievances or to bargain collectively with management.

The Trans-Pacific Partnership: Another assault on human rights that must be opposed

The right to have the means to sustain one’s physical life is a foundational principle of human rights.  The right to work and earn a livable wage in conditions commensurate with human dignity that allow for securing adequate food, clothing, housing, medical care and necessary social services is the basis for material sustainability and a dignified life.

By Lee Camp, Commissioner for the Comedic Arts

You know one of the most powerful weapons the government can use against us? It’s not missiles, or gas, or propaganda, or threatening to release all the nude TSA body-scanner images of you as Christmas cards. Nope. …It’s boredom. When evil stuff is boring, mind-blowingly BORING, people don’t give a crap about it. Boring evil is the worst! People care less than Vladimir Putin at an Amnesty International convention.

The TPP is bad for business

Small businesses and entrepreneurs are foundations of strong communities. Yet as with previous international trade agreements, small businesses are not at the table negotiating the details of Trans-Pacific Partnership (TPP) agreement. Instead, the TPP is being drafted by the representatives of more than 600 major corporations. Unlike the owners of cooperatives and community businesses, the owners and managers of big capital are unconcerned about the economic impact of trade policies on local communities and the people who live in them.

Kevin Zeese is a participant in PopularResistance.org which will be announcing a campaign to stop the TPP in the very near future; and a member of the Green Shadow Cabinet where he serves as Attorney General.