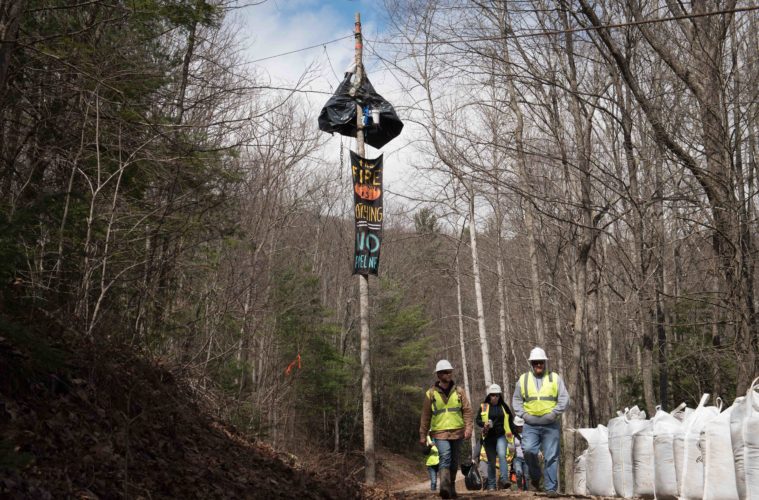 Above Photo: By Will Solis

You can find Red by the campfire smoke and bright yellow crime-scene tape.

Red is a 61-year-old Virginia mountain woman who since April 2 has been living in a tree inside the white-and-blue-taped corridor marked out for the interstate Mountain Valley Pipeline. She and her 30-year-old daughter Minor, who is stationed in another tree not far away, are defending their land against what they see as a looming environmental catastrophe.

To get to Red’s tree sit, you’ve got to cross wooden boards that cross Bottom Creek numerous times. Water flows all around you, supporting wetland vegetation like skunk cabbage across the property, where the Terry family has lived for seven generations.

A judge ruled on Jan. 31, however, that the company may use eminent domain to take land along the pipeline’s 303-mile route from northern West Virginia to southern Virginia. After Red took to the trees, Roanoke County blocked supporters from giving her supplies, and it provided law enforcement officers to supplement MVP’s security guards. The first person I saw at the camp, in fact, was a camouflage-clad guard whose path through the woods helped me figure out where the bridges were.

On the morning I visited, at the end of her third week amid the treetops, Red was trying to warm up from below-freezing temperatures the night before. She was a little grumpy after running out of cigarettes, but was as fiery as her nickname suggests.

“MVP has not only bought a lot of politicians and our judge, but also our police force,” Red said. “MVP is allowed to tell our cops what to do and what not to do. I don’t think a cop who was allowed to think on their own would have denied me the cigarettes that are down there, and my BC Powders [for headaches] are down there. They’re not allowed to bring me anything up here. I think that it sounds a lot like Hitler and his army, only let’s substitute MVP. MVD is what I like to call them—Mountain Valley Dicks—because they are really screwing with everybody’s property, everybody’s faith, everybody’s water.”

Red and her daughter sit to delay the pipeline. To hopefully block it. To protect their land and Bottom Creek, an important stream that flows first into a Nature Conservancy preserve, where it forms a stair-step series of waterfalls known as “The Kettles,” before eventually flowing into the South Fork of the Roanoke River.

Red and Minor Terry are two of at least eight people who have taken to the trees to protest construction of the Mountain Valley Pipeline, which is intended to move natural gas from the fracking fields of the Marcellus and Utica shale formations in northern West Virginia, eastward across the Blue Ridge Mountains, and ultimately to East Coast consumers, and perhaps shipment overseas to foreign markets. Both the Mountain Valley Pipeline and the Atlantic Coast Pipeline, its sibling which runs a similar route a couple of hours to the north, were proposed in 2014 and have in recent months received approvals by the Federal Energy Regulatory Commission (FERC) and other state and federal environmental and land management agencies.

With contractors cutting trees and preparing to dig trenches for the 42-inch-diameter pipes, opponents are closely monitoring the process, but a handful of individuals like Red and Minor are taking more direct action by placing themselves in the pipeline’s path. Besides the mother and daughter, who are camped on family land in Bent Mountain, protesters have taken to trees at three other locations.

The first went up in late February, when protesters began sitting in trees near the Appalachian Trail on the West Virginia side of Peters Mountain, in Jefferson National Forest. A month later, several miles away, pipeline opponents raised a monopod atop a fallen tree and tied it to a gate on the Virginia side to block an access road to a pipeline construction site. All three of those actions took place on National Forest land, and they were erected to slow down or stop the company’s plans to bore a hole through the mountain, beneath the federally protected trail.

Inspired by the tree sits on Peters Mountain, Red and Minor went up into their respective stands on April 2. Later that month, on the same day I visited Red, another three protesters took to the trees in Franklin County, Virginia, on a farm owned by a couple who have fought the pipeline’s attempts to take portions of her land through eminent domain.

Law enforcement blocked access to the monopod on the National Forest road, as well as to Red and Minor’s tree sits on Bent Mountain. Tensions escalated through April. On Sunday the 22nd, two people were arrested after one tried to deliver supplies to the woman living in the monopod. The same day, one of the Peters Mountain tree-sitters voluntarily came down, and the structure was quickly dismantled by pipeline officials

The tree sits have drawn growing media attention, rallying public support even as opponents fight a parallel battle in the courts and regulatory agencies to stall or stop the pipeline. After a Washington Post story on Red noted that her supporters had been blocked from giving her food and water, Roanoke County police said that once Red and Minor had requested food, it was given to them. Police have given them sandwiches and fruit since then.

Natalie Cox, a spokeswoman for the Mountain Valley Pipeline, wrote in an email that the company is committed to “responsible construction” of the pipeline. “We respect opponents’ right to peacefully and lawfully protest. At the same time, however, it is important to note that all work for the MVP project has been authorized by federal and state agencies, and the Virginia DEQ has imposed on MVP the most stringent oversight of a natural gas pipeline project in the department’s history,” Cox wrote.

The stand-off on Bent Mountain has become the focal point for media attention, in part because the other tree-sitters remain anonymous. The monopod sitter is known as “Nutty,” but otherwise she has not been identified. Appalachians Against Pipelines declined to respond to questions about the tree-sitters on Peters Mountain, but did direct me to a Facebook post that was written by a tree-sitter and includes this statement: “Each of us in this fight, in a tree or a monopod, or on the ground have our reasons. For me, it’s because Appalachia is my home. The coal industry has already taken from my family and caused pain and grief and resentment that will never go away. I know the MVP will impact families here in Monroe County and other Appalachian communities along its route in similar ways.”

Fundraising for Appalachians Against Pipelines is being handled by  Rising Tide North America, a grassroots network of groups and individuals who have taken direct action against projects across the world, including in the Philippines and on the Gulf Coast. The Franklin County tree sitters are protesting on a farm owned by Carolyn and Ian Reilly, but their fundraising efforts are linked to Interfaith Alliance for Climate Justice, an environmental stewardship group.

Red and Minor might have remained pseudonymous but for the fact they are taking their stand on family land, as well as arrest warrants filed by Roanoke County. Their tree stands are easily accessible from the road, so supporters have flocked  from the Roanoke and New River valleys to gather near Red’s tree stand, stay overnight and broadcast dispatches about the situation across social media, especially Facebook.

I could see the appeal during my visit. Camping creates camaraderie, which combined with the righteousness of the cause and the touch of danger from proximity to law enforcement and private security has forged an iron coalition under the banner #StandWithRed. One activist often on site told me the camp even received a recent visit from a local 3 Percenter

On my visit, I spoke to Trish McLawhorn, a Radford woman who has been a regular visitor to the encampment. She has brought her 7-year-old daughter to the site, and they played in the woods and in Bottom Creek, creating an additional connection to the land and the waters that flow through it.

“I’ve been telling her about this as it develops,” McLawhorn said. “At first she was sad because the police were here. She wanted to come back and play in the trees and in her fort, and she might not get to do that. Now she just tells me she thinks it’s so great and so brave and courageous, and, ‘When I grow up one day, I might sit in a tree to protect my land.’

“I can’t think of a better legacy for my daughter to watch,” she said. “This may look a little radical to other 61-year-olds, and it is, but I believe that radical is where we are. It’s where we’re living these days.”

What you can do to help

The fight against the Mountain Valley Pipeline and the Atlantic Coast Pipeline have been going on since both projects were announced in 2014.

It’s possible that the Virginia Department of Environmental Quality may re-open a comment period to evaluate the pipeline’s impact on individual waterways, but most of the public comment period has passed.

Even so, many of the pipeline’s opponents have urged their allies to contact elected officials, both in Congress and state legislatures, but especially Virginia Gov. Ralph Northam, in hopes that he may push the DEQ to take more public comment and make a new recommendation regarding the pipeline.

“Before any of the stuff gets built, we want to create a baseline, so that as these things are built, we’re able to document if things are happening to water quality,” said David Kinney, eastern policy director for Trout Unlimited. “We can report them to the agencies and get the issues dealt with, and also have this long-term data source.”

Trout Unlimited is offering more webinars this spring to prepare volunteers ahead of pipeline construction.

“We want to take what seems like an overwhelming scientific project and make it accessible to real people, whether landowners or someone like me, a volunteer just wanting to go out and make sure things aren’t going haywire,” said Russell Chisholm of Newport, Virginia.