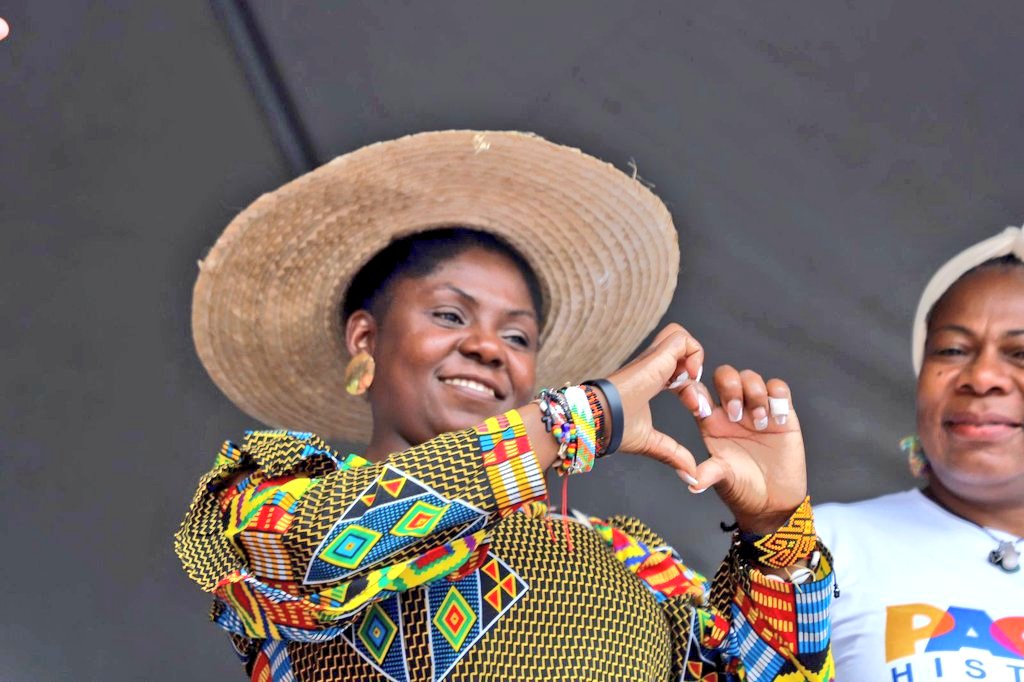 The Triumph Of A Pedagogy Of The Oppressed In Progress

Her triumph is not just personal, but the result of a strong mass movement.

I am excited and moved by the process that has been unleashed after anger and indignation led Francia Márquez Mina to declare: “I want to be President of this country ,” and I am excited to think about the growth and maturity of the Afro-descendant people in the face of the Colombian political-electoral process in 2022.

Francia as vice-presidential candidate of the Pacto Histórico (Historical Pact), is the result of her daring as much as the stubbornness, audacity and nonconformist disposition of the young spirits who didn’t hesitate, when she said “walk with me”, in responding: “let’s go”. And, what a path that has been undertaken!

In my opinion, the route is quite clear, but the map remains to be drawn and not everyone knows how to make maps, nor does everyone know how to read and follow them.

It is very interesting and important how Francia has learned to be respectful and coherent in echoing the voices of the people, instead of the phony politicking to which we are used to. The enormous growth in her political narrative is not only due to her beautiful and natural intelligence, (not in vain blessed by [the Orisha] Orunmila). It’s also fundamentally due thanks to her life experience as a Being who has suffered all the forms of oppression, against which she rosed up in rebellion, allowing her a capacity for listening and transcending words in action and deeds, resonating in those of us who come from the same place. These are capabilities and attitudes only typical of those who always dare to know that, with nothing more to lose in a white-male supremacist, arrogant, violent predatory world like this one, at the end of the day we have everything to gain by facing risk. Risks that are existential because either we are, or we are not.

For centuries a place of non-existence has been imposed on us, being dehumanized and dispossessed.  For centuries we have sustained ourselves in the sense of the complex, deep, multidimensional, and spiritual essence interlocked in the African philosophical principle of Ubuntu: “I am because we are”. From this place of identity, Francia stands with us, armed with the dignity and humanity that the domineering people of this world don’t know.

That is why I will continue to vote for “Francia President”, because I understand that it is not a question of today, but of the future, looking toward a horizon of dignified and human well-being that corresponds to us to finish building. The challenge posed by this process as Ubuntu people is to make it sustainable. It’s not just about the votes we’ll put in this electoral election. It is mainly about the personal and collective work that allows us to transform from within. Political-electoral education is an imperative, the strengthening of identity and belonging that implies practical exercise, not discourse, remains in demand; organization and sustainability as a movement has been shown to be urgent; to heal communally and spiritually a disintegrated society drowned in a borehole reflected in those dehumanizing practices that have the country submerged in a dreadful place. These are all issues that are part of what it means to venture on a different life project.

Francia comes from the struggle, and the struggle goes on. We face a system that has managed to take away the joy from the hearts of our reborn; in which our young men do not manage to look forward, recognizing themselves in their future because the system does not leave them with options beyond 20 years of age. A system anchored in the bellicose militarist ideology that solves everything with blood, criminality and corruption, denying the right to justice. We have to expect to be charged for the audacity to impose a black woman who projects the voices of people that no one has heard before. We must expect to bring down from their seats Senators and House Representatives, mayors and governors, “representatives” of international organizations and spokespersons who act as the black butlers of the white house. We have to let more young people and women take the lead, until, finally, life governs in its distinguished suit of dignity and humanity.

We have been walking for a few centuries, sometimes under the guidance of the spirits and the higher forces that have traced the path, sometimes lost in the tricky tangles of an obsolete value system. Today we are brought again ahead in light that shows us that we must return to the root to chart the course.

In 2014 I wrote about the pedagogical process that characterized the “Mobilization of women for the care of life in ancestral territories ,” a march led by 80 afro-descendant women to Colombia’s capitol, Bogotá, among them Francia. The objective of the march was to demand from the national government rectification of the error of allowing illegal mining in ancestral territories, product of the corrupt action of the Ministry of the Interior that declared the non-existence of Afro-descendant people in the Community Council of La Toma, municipality of Suarez – territory of Francia Márquez Mina, vice presidential candidate 2022. The campaign “I am because we are,” is a pedagogical process of the oppressed informed in a philosophy of liberation that, with Francia in the political-electoral arena and the national scenery of presidential campaign, does what 80 women did through the streets of Colombia walking to Bogotá at the end of November 2014, I quote:

“The women recreated a political discourse based on their rights as an Afro-descendant people, formulated, recreated and appropriated from the action itself. The mobilization was an educational process configured from their own thought and conviction; a thought that, however, is not unique and original because it has been formulated by others from their own processes, but it was authentic to the extent that it comes from life experience and actions in the face of injustices that prevent Black/Afro-descendant people from completely overcoming the place of subalternity,  of the colonized, of the oppressed.

Their message went beyond denouncing mining and demandings on the state-government to stop it. Forbidden public, male, political spaces were symbolically taken; spaces that had not seemed to be for them before. Their message reaffirmed the existence of a black person different from the one the system of coloniality has insisted on representing as lazy, incapable, cowardly and dispossessed.

They exposed a philosophy of life that reveals a counter-hegemonic logic that was questioning the unidimensional, homocentric, Eurocentric, patriarchal and racist world-system that dominates the logics and actions of non-black Colombia.

Walking through the streets of Colombia alien to the strange place that [for them] is the North of Cauca, they crossed the symbolic limits of the separation between the good Colombians and the subaltern beings that are not even mentioned. In a loud voice and inescapable presence, they determined “here we are”, “they cannot make us invisible”. It was a way of stripping their apprehended, self-asserted humanity naked in front of those who have dehumanized them. In that sense it was an act of liberation, of decolonization.

But they were also women, Black women. Their path marked an event to be written in the present and future history of the Black movement.” (Mina, Machado, 2015).

Sounds familiar? While the announcement of Francia as vice-presidential candidate of the Historical Pact was happening on March 23th, and looking at photographs of the people close to me and those who have made this moment possible, excited and ready for whatever comes, I remembered the mobilization of 2014 and its close relationship with this today and that tomorrow visioned. The common thread is in its historicity in the passage from a thought to the praxis that makes the moment a political historical process (in addition to the coherence of someone determined by her history and awareness of it). The wounded cry of a black/Afro-descendant woman who said I want to preside over this country, has a collective resonance because it is not a simply idealistic, futile, personal individualistic issue, but a rationality that comes from the experiential, existential objective historical realities that define injustices and inequalities lived by so many dehumanized. It is from this existential experiential historical consciousness that a philosophy and a movement emerge: “I am because we are,” beyond a leader and a possible caudillismo and populism. The 723,000 votes [from the primaries] are each individual consciousness transformed by a creative pedagogical process, into collective consciousness and political praxis confronting the paradigms that sustain oppression, and proposing to build a new place of humanity and dignity of life, as a historical length of a process for liberation.

Our challenge as people of the black/Afro-descendant, raizal and palenquero people  is to make the mobilization of “soy porque somos” (I’m because we are) to continue, until there is no need to shed our blood or be transhumed between being negro, “white-mestizo” or indigenous (like so many Polo Polo), to be and exercise our rights as a people.  To resist is not to endure, our historical resistance must be reflected in an electoral political process that does not simply add votes, but political consciences ready for radical systematic structural changes. Only in this way will we have the joy of our own and many Francias in the next presidencies of Colombia.