Looking around the world today, it may seem bleak: crackdowns on civil liberties and worker rights are happening everywhere: Cambodia, Colombia, Egypt, Hungary, Turkey, the United States and elsewhere.

Yet whenever and wherever basic rights are under attack, there always will be people resisting.

The question for unions is: Will the labor movement be a part of that resistance—or not?

In Tunisia, unions answered with a resounding, “Yes!”

HERE’S HOW IT HAPPENED
Back in 2011, people across the Middle East began rising up against decades of corruption and misrule that left their countries with few opportunities for citizens to improve their lives.

The spark that set off the uprisings across the Arab world took place in Tunisia, a small country at the top of North Africa along the Mediterranean. President Zine el-Abidine Ben Ali had ruled Tunisia for decades. With his family, Ben Ali held sway over a large percentage of the country’s private economy, controlling real estate, hotels, airlines, telecommunications and automobiles.

On December 17, 2010, a 23-year old Tunisian market vendor set himself on fire to protest the government corruption that made it impossible for him to earn a living. Mohamed Bouazizi died from his injuries. But Bouazizi’s action in his small town far from the capital touched a nerve in Tunisian society, and momentum spread quickly across the country.

UNIONS PLAY CENTRAL ROLE IN THE UPRISING
People stood up and marched on local governments. The more the government shot or beat up protesters, the more crowds increased, calling for “Bread, Freedom and Social Justice.”

Local unions and their members understood that those demands represented what all working people wanted, and began to join the protests, ultimately playing a central role in the revolution as they took to the streets and helped organize security for their neighborhoods. Pushed by grassroots union activism and calls by local unions to take action, the national Tunisian Labor Federation (UGTT – the Tunisian AFL-CIO) increasingly took a stronger and stronger stance in support of the protests. The regime still held a monopoly on violence, and as a leading institution in the country, the UGTT made a decision to put its political power and voice on the line, risking everything to follow the people in this peaceful movement.

With UGTT calling a national strike on January 14, 2011, more than 150,000 Tunisians rallied in front of the symbol of repression, the interior ministry (imagine the FBI, CIA and National Security Council all rolled into one). By the end of the day, Ben Ali had fled. 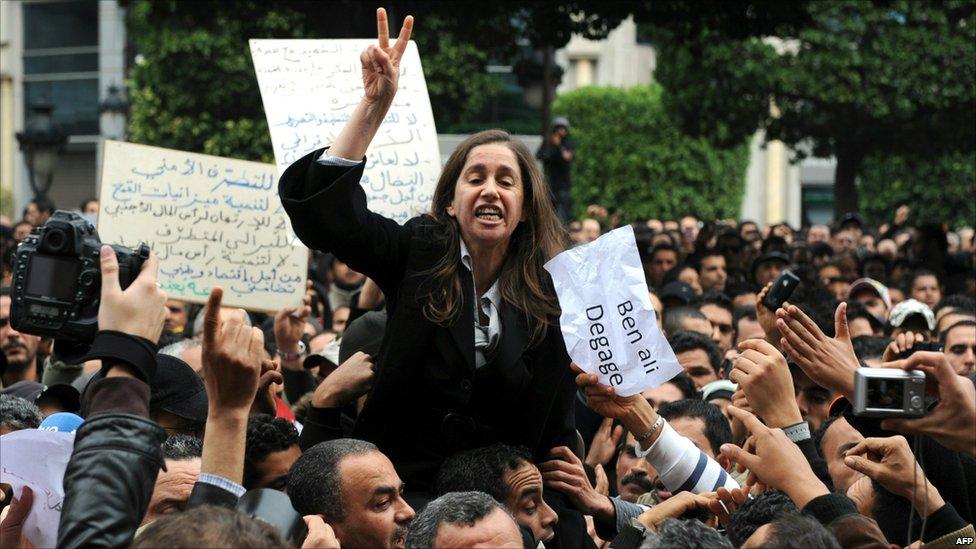 LESSONS IN “SOCIAL MOVEMENT UNIONISM”
The UGTT’s actions during the Tunisian protests were not a given. If you had asked an average worker in Tunisia in June 2010 about UGTT, many would have expressed disappointment. They might have said, “They are a movement from another era. They were great and powerful back in the day, but now I don’t see what they do.” But the UGTT made a choice when it counted, and in doing so, the union federation recaptured the imagination of Tunisian workers and their communities.

■ The national federation listened to the grassroots. The UGTT Executive Council met in executive session continuously throughout the protests. The top leadership—national union presidents and federation top leadership—dropped everything. The UGTT created a “war room” not to direct the action but to listen to the voices of union members and the community who were taking action in the streets, while guiding the change.

■ The movement was bottom up. Local labor movements, responding to their grassroots, tapped into the pulse of a social movement. Astute locals, in tune with the public, channeled information up to the leadership.

■ UGTT organized beyond labor’s base. UGTT broadened its focus from the rights of unions and their members during this protest movement. UGTT leaders spoke of the working class, one not segmented by sector or union membership. They sensed that the issues on the street are the labor movement’s issues: Bread, Freedom, Social Justice. Without worker democracy, there eventually will be no labor movement. Together, UGTT community networks protected neighborhoods, hosted events in union halls and coordinated actions with the protest movement.

■ Labor used its political insider status for something beyond its own short-term gain. UGTT put it all on the line, used all its connections and channels of influence to reflect the voice of the people to the state, and hold the state accountable.

THE RESULT? WORKERS FLOCKED TO UNIONS, EVERYONE BENEFITED
Tens of thousands flocked to Tunisia’s labor movement because it played this social role, one that encompassed aspects of both “lead from behind” and lead by galvanizing. When I met with the leader of the public-sector government workers after the uprising, he said, “We’re having a big problem. We have just gained thousands of union members and we aren’t even organizing. Can you give us some tips?”

We in the United States should have such a problem!

The lesson from Tunisia are inspiration to union members and leaders everywhere: when faced with authoritarian regimes or institutions that deny people their basic rights, unions and other civil society organizations face a choice: Step up, form coalitions and build true economic and political freedom. Or, appease the ruling elite which will, eventually, work to destroy the labor movement. The union movement is central to defeating authoritarianism—in Tunisia and around the world.