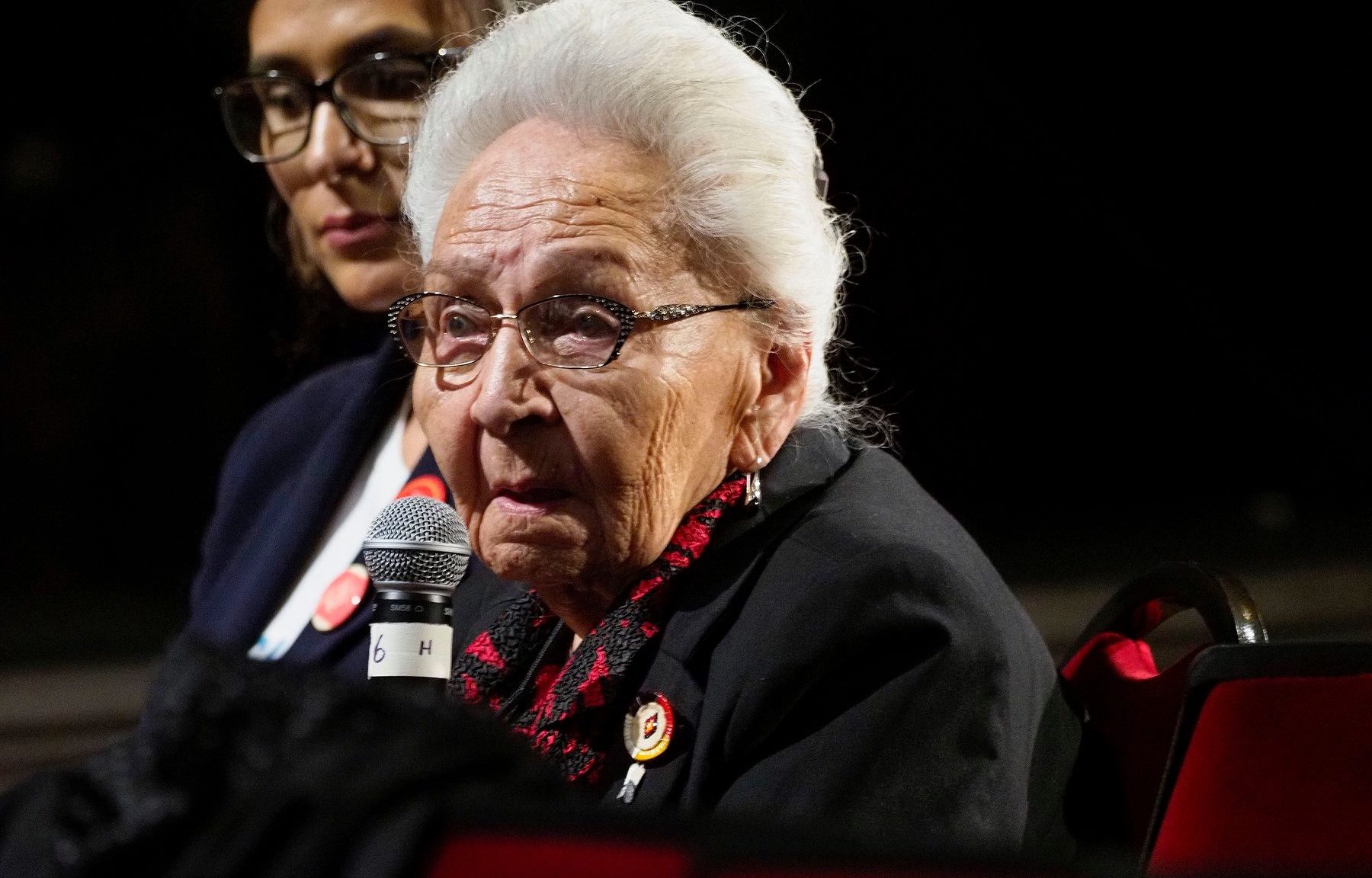 The Two Faces Of America

Above photo: Marcella LeBeau, a 99-year-old World War II veteran from the Cheyenne River Sioux Tribe, asks the 2020 presidential candidates about their support for the Remove the Stain Act, a bill to rescind the Medals of Honor for the 1890 Wounded Knee Massacre, at the Frank LaMere Native American Presidential Forum in Sioux City, Iowa, on August 20, 2019. Photo: Ho-Chunk Inc

America has parallel histories, which it displays by wearing two faces.

The first face is that of a near-perfect country filled with honest, hardworking American patriots, a country where all men are created equal. A country where there is peace, justice, and liberty for all; land of the free, home of the brave.

The second face is that of a country that hides is warts by not publishing its true history in the books it uses in its schools. The horrid brutality of the settlers to the Indians as they moved further and further west taking land and lives in their wake. The inhumane acts against black people as they were brutalized as slaves to make the white plantation owners rich.

Hundreds of African Americans who were lynched from trees for the slightest disagreement with the white men and Indian families that were murdered in cold blood for the grievous crime of standing in the way of Manifest Destiny.

The largest mass murders in the history of the United States took place in Indian Country culminating in the slaughter of nearly 300 innocent men, women and children in South Dakota at Wounded Knee in 1890. These are the horrible acts of murder that America tries to pretend never happened.

William Newell, a Penobscot Indian and former chair of the anthropology department of the University of Connecticut, claims that the first Thanksgiving was not “a festive gathering of Indians and Pilgrims, but rather a celebration of the massacre of 700 Pequot men, women and children.” In 1637, the Pequot tribe of Connecticut gathered for the annual Green Corn Dance ceremony.

Mercenaries of the English and Dutch attacked and surrounded the village; burning down everything and shooting whomever try to escape. The next day, Newell notes, the Governor of Massachusetts Bay Colony declared: “A day of Thanksgiving, thanking God that they had eliminated over 700 men, women and children.” It was signed into law that, “This day forth shall be a day of celebration and thanksgiving for subduing the Pequots.” Most Americans believe Thanksgiving was this wonderful dinner and harvest celebration. The truth is the “Thanksgiving dinner” was invented both to instill a false pride in Americans and to cover up the massacre.

This is just one of the terrible events in American history that is not taught in our public schools.

Every racial minority in America has its own oral history of their own truth. The total brutality inflicted upon the early American Chinese is despicable. The wanton slaughter of Hispanics in Texas is not taught in school. The Chinese built the railroad tracks that America celebrates and hundreds of them died brutally while doing the job. African Americans were bought and sold like cattle at the height of the days of slavery.

Native Americans were slaughtered and starved on their own lands in an effort to subdue them and steal their lands. Indians were merely obstacles standing in the path of western expansion.

How many thousands of Native Americans died over a shiny object known as gold? In South Dakota, California and Alaska they died by the thousands. They died because of the chief motivation by America’s new settlers, greed.

I heard a former South Dakota governor say that the giant herds of buffalo mysteriously disappeared. Surely he must have known they disappeared because they were the main source of food and survival to the tribes of the Plains. Kill the buffalo and you killed the Indian. Just another sordid part of American history not taught in schools.

The oral history of the indigenous people has proven to be very accurate, but this oral history was never sought out as truth by America’s historians.

America has parallel histories. One it is proud to display and one it hides as dark secrets. Some South Dakotans raised hell when Basil Brave Heart suggested that Harney Peak’s name be changed to Black Elk Peak. “Leave the names the same,” they clamored without knowing that every mountain, river, lake and valley had a name long before they came along. They are the ones who changed the names. Mahto Tipila, home of the bear, was changed to Devil’s Tower by the white settlers. Apparently one settler misinterpreted the word “bear” as “bad god” which evolved to Devil.

Ethnic minorities often equate “history” as “his story” and that is the way the history books were written and it is very unlikely that America’s true history will ever be told because it would give this country a black eye all over the world, but what most American’s don’t know is that people in Europe, the Middle East and in Asia do know the true and brutal history of America because it is taught in their schools.

This country has tried to hide its other face far too long and it is time to bring that face into the daylight.

Tim Giago, an Oglala Lakota born, raised and educated on the Pine Ridge Reservation and is the founder of the Native American Journalists Association. He was a Nieman Fellow at Harvard with the Class of 1991. He can be reached at najournalist1@gmail.com