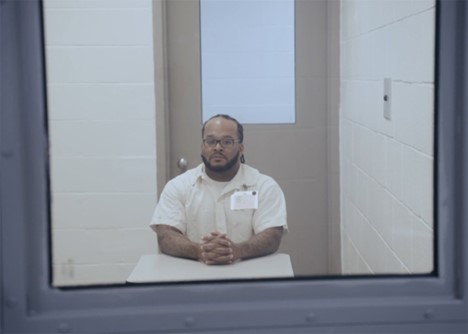 The Two Types Of Death Penalties

Above Photo: Kevin Johnson pictured on death row at Missouri’s Potosi Correctional Center in 2022. Courtesy of Missourians for Alternatives to the Death Penalty.

On November 28, 2022, the governor of Missouri refused to grant clemency to Kevin Johnson and the state Supreme Court denied motions to halt his execution.

Johnson is scheduled to be executed on Tuesday, November 29, 2022.

Thirty-seven-year-old Kevin “KJ” Johnson is scheduled to be executed by the State of Missouri on November 29th; most would not view him as a “political prisoner.”  However, given the poverty, neglect, suffering and abuse that comes with being a captive in domestic colonies and urban enclaves within a capitalist and imperialist state, from the onset Kevin was undoubtedly a victim of US politics and policing.

On July 5, 2005, 19-year-old Kevin “KJ” Johnson witnessed his 12- year-old brother, “Bam Bam” collapse while police conducted a search of their grandmother’s home. When KJ learned later that day that his brother had died, he believed that the death was caused by medical neglect. Hours later, traumatized, mentally and psychologically distressed, Kevin spotted Kirkwood Police Sergeant William McEntee in the neighborhood. He approached the patrol car and screaming “You killed my brother!” Then he shot and killed the officer.

Inadequately armed with court-appointed attorneys, KJ had two trials. The first resulted in a hung jury which rejected the first-degree murder charge. In the second trial, an all-white jury found KJ guilty and sentenced him to death for killing of a white police officer.

In the 17 years that Kevin Johnson has served on death row, nearly 20,000 people have been killed by police in the United States, over 1,000 this year alone.  Few officers have been convicted, even fewer have been sentenced to 20 years (or more). Currently, there is only one police officer on death row: Antoinette Frank, a Black woman. Convicted, along with her drug dealer boyfriend, of the robbery of a New Orleans based Vietnamese Restaurant where she worked part time, Frank had murdered two members of the family who ran the establishment, and her fellow NOPD officer Ronald A. Williams II. The decision by the State of Louisiana to push for the death penalty likely had more to do with Frank betraying her fellow officer than any claim to deliver actual justice.

Impunity for police forces that function as colonial enforcers tracks the murders of the occupants of this stolen land. Awaiting the outcome of our collective efforts to save the life of Kevin John next week from Missouri’s death row, some of us commemorate the police murder of 92-year-old Kathryn Johnston ; who was gunned down by Atlanta Police in 2006.

This police killing became one of the rare occasions in which police were prosecuted for murder .  People in Atlanta observed and then acted during an era where many believed you had to be “doing something” wrong, naively arguing: “The police ain’t just going to shoot you.” That was before cell phone footage shifted blame from the victim to the state perpetrator. The 92-year-old Ms. Johnston never even had a traffic ticket; yet, she was murdered inside her own home by police. In an attempt to exonerate themselves, police planted marijuana in Ms. Johnston’s basement; and handcuffed Ms. Johnston after they gunned her down, leaving the deceased bleeding, handcuffed and lying in a pool of her own blood while police tampered with a crime scene. Media vilified Johnston as a violent, criminal rogue who shot at the police officers. Media rarely mentioned that police ripped her burglar bars off her door and came in unannounced with hoodies and Timberland boots without signaling that they were officers. Eight years shy of a century, Ms. Kathryn Johnston had her case eclipsed from national headlines when four days later, 23-year-old Sean Bell was murdered, and two of his friends, Joseph Guzman and Trent Benefield were seriously wounded, after NYPD fired 50 shots into the vehicle the men were driving as they were attempting to leave Bell’s bachelor party, a few hours before his planned wedding. The Kathryn Johnston case was “closed” when officer Jason R. Smith, was sentenced to 10 years, Gregg Junnier, to 6 years, and Arthur Tesler, to 5 years in federal prison. The police officers were mandated to collectively pay $8,180 in restitution for the costs of Kathryn Johnston’s funeral and burial. In the Sean Bell case, officers Michael Oliver (who fired 31 of the 50 shots), Gescard Isnora, and Detective Marc Cooper, were acquitted on all counts.

In 2022, willful ignorance and false platitudes make some feel comfortable about complacency. The scale of justice appears to lean toward the linchpins of capitalism/imperialism and executioners. Deputy Chairman of the Illinois Chapter of the Black Panther Party, Fred Hampton, stated: “It’s terrible but it’s fine.” Those who do not care about reform, empty promises and handshakes from politicians, photo ops or ghost-written tear-jerker speeches by entertainers and propagandists, also likely do not care about state-orchestrated marchers leaving Instagram pics and a fed file.

Community control of public safety and decentralization of our neighborhoods is mandatory. A pastor in Rochester, New York, when George Floyd was murdered stated on WBAI, “If you kill us, we will kill your economy.” Economic destruction by not spending money leads to creative alternative choices for communal and familial households. The police are terrorizing our communities. Those who live and work in and care for the community must come to terms and recognize that there are no neutrals in war. Economic boycotts, political organizations, and security apparatuses must become more effective.

Whether it is Kathryn Johnston or Kevin Johnson or someone whose name we do not know, our very lives are on the line in terms of police violence. Until we dare to challenge the authorities and practitioners of genocide, we will remain their victims.

Find out more about the case of Kevin “KJ” Johnson and how you can get involved by visiting https://www.madpmo.org/  to support Mr. Johnson and Missourians for Alternatives to the Death Penalty.