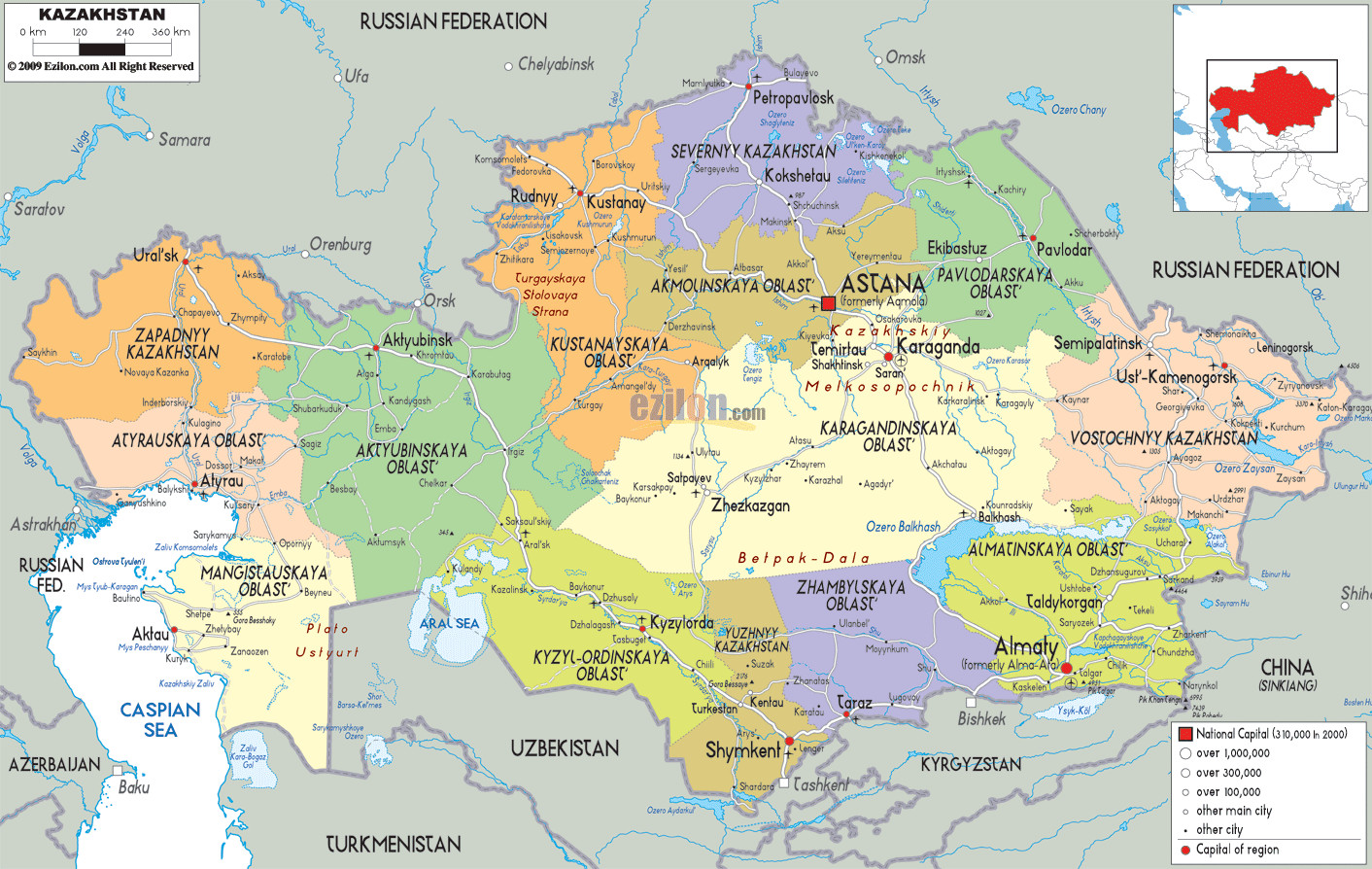 The US Directed Rebellion In Kazakhstan May Strengthen Russia

The 350 pages long report recommended certain steps to be taken by the U.S. to contain Russia. As its summary says:

Recognizing that some level of competition with Russia is inevitable, this report seeks to define areas where the United States can do so to its advantage. We examine a range of nonviolent measures that could exploit Russia’s actual vulnerabilities and anxieties as a way of stressing Russia’s military and economy and the regime’s political standing at home and abroad. The steps we examine would not have either defense or deterrence as their prime purpose, although they might contribute to both. Rather, these steps are conceived of as elements in

a campaign designed to unbalance the adversary

RAND lists economical, geopolitical, ideological and informational as well as military measures the U.S. should take to weaken Russia.

Since the report came out the first four of the six ‘geopolitical measures’ listed in chapter 4 of the report have been implemented.

The U.S. delivered lethal weapons to Ukraine, it increased its support for ‘rebels’ in Syria. It attempted a regime change in Belarus and instigated a war between Azerbaijan and Armenia. The U.S. is now implementing measure 5 which aims to ‘reduce Russia’s influence in Central Asia’.

Kazakhstan, Russia’s southern neighbor, was part of the Soviet Union. It is a mineral rich, landlocked country three times the size of Texas but with less than 20 million inhabitants. A significant part of its people are Russians and the Russian language is in common use. The country is an important link in the strategic Belt and Road Initiative between China and Europe.

Since the demise of the Soviet Union the country has been ruled by oligarchic family clans – foremost the Nazarbayevs. As the CIA Worldfactbook notes:

chief of state: President Kasym-Zhomart TOKAYEV (since 20 March 2019); note – Nursultan NAZARBAYEV, who was president since 24 April 1990 (and in power since 22 June 1989 under the Soviet period), resigned on 20 March 2019; NAZARBAYEV retained the title and powers of “First President”; TOKAYEV completed NAZARBAYEV’s term, which was shortened due to the early election of 9 June 2019, and then continued as president following his election victory

Over the last decade there have been several uprisings (2011, 2016 and 2019) in Kazakhstan. These were mostly caused by uneven distribution of income from its minerals including oil and gas. The oligarchs in the capital of Astana / Nur-Sultan live well while the provinces which produce the minerals, like Mangistauskaya in the south-west, have seen few developments.

Recently the price for liquefied petroleum gas (LPG), used by many cars in Kazakhstan, went up after the government had liberalized the market. This caused another round of country wide protests:

The string of rallies that has torn through Kazakhstan since January 2 began in the western oil town of Zhanaozen, ostensibly triggered by anger over a sudden spike in the price of car fuel. Similar impromptu gatherings then quickly spread to nearby villages in the Mangystau region and then in multiple other locations in the west, in cities like Aktau, Atyrau and Aktobe. By January 4, people had come out onto the streets in numbers in locations many hundreds of kilometers away, in the southern towns of Taraz, Shymkent and Kyzyl-Orda, in the north, in the cities of Uralsk and Kostanai, as well as in Almaty and Nur-Sultan, the capital, among other places.

Few saw scenes as fiery as those in Almaty, though.

Clashes in Almaty continued throughout the night into January 5. After being dispersed by police from Republic Square, part of the crowd headed around two kilometers downhill, to another historic location in the city, Astana Square, where the seat of government used to be located in Soviet times.

While there is little reliable way to gauge the scale of the demonstrations, a combination of on-the-ground reporting and video footage appears to indicate that these protests may be even larger than those that brought the country to a near-standstill in 2016.

While the grievances that sparked the first rallies in Zhanaozen were to do with fuel prices, the sometimes rowdy demonstrations that have followed appear to be of a more general nature. Chants of “shal ket!” (“old man go!”), usually understood as a reference to former President Nursultan Nazarbayev, who continues to wield significant sway from behind the scenes, have been heard at many of the demos.

The protests escalated soon with gangs of armed protesters taking control of government buildings and setting them on fire. There were also attempts to take control of radio and TV stations as well as the airport. Police, which generally did little to intervene, were gunned down.

The actions in Almaty, the country’s largest city and former capital, are certainly not spontaneous reactions by a crowd of poor laborers but controlled actions by well trained groups of armed ‘rebels’.

Kazakhstan: Very important and intriguing detail with strong shades of Kyrgyzstan 2020. Peaceful people initiate rallies, but shady and violent individuals turn up to sow trouble, and it is never remotely clear who they are or where they came from /1 https://t.co/qYSlUUrMVx

We have seen similar formations during the U.S. instigated uprisings in Libya, Syria, Ukraine and Belarus.

Demands of the Protesters in #Kazakhstan

1. Immediate release of all political prisoners

2. Full resignation of president and government

3. Political reforms:
Creation of a Provisional Government of reputable and public citizens. Withdrawal from all alliances with #Russia pic.twitter.com/wNAi47Mspg

A more reliable source confirms these:

The list of demands of protestors in #Kazakhstan that’s been circulating is interesting, to put it mildly.
While most demands focus on bolstering social & economic support & countering corruption points #1, 7, 10, 13,16 expose the roots of protest & who’s driving them pic.twitter.com/DNnxZpT5F8

The government of Kazakhstan has since lowered the LPG prices. On January 5 President Tokayev relived the ‘First President’ Nazarbayev of his position as chairman of the Security Council and promised to act tough on armed protesters.

Kazakhstan is part of the Russian led Eurasian Economic Union (EAEU) as well as the Collective Security Treaty Organization (CSTO). On the morning of January 5 Tokayev had a phone call with the presidents of Russia and Belarus. He has mobilized airborne units of the armed forces of Kazakhstan. On the evening of January 5 he requested support from the CSTO against the ‘foreign directed terrorists’ which are fighting the security forces.

Russia, Belarus and other CSTO members have dedicated quick reaction forces reserved for such interventions. These will now be mobilized to regain government control in Kazakhstan. Russian CSTO forces are currently on their way to Kazakhstan. Belorussian and Armenian troops will follow soon.

They are in for some tough time:

During the last decades the U.S. and its allies had been relatively quiet about the dictatorial leadership in Kazakhstan.

NATO’s cheerleading corner of FSU “experts” already working hard to spin Kazakhstan uprisings as somehow Putin’s fault or indictment of Putin—but note how quiet our media-NGO complex has been the past 20 years re: the regime’s human rights abuses, corruption & “authoritarianism”

Chevron is the largest oil producer in Kazakhstan and the former British prime minister Tony Blair has previously been giving advice to then President Nursultan Nazarbayev on how to avoid an uproar over dead protesters:

In a letter to Nursultan Nazarbayev, obtained by The Telegraph, Mr Blair told the Kazakh president that the deaths of 14 protesters “tragic though they were, should not obscure the enormous progress” his country had made.

Mr Blair, who is paid millions of pounds a year to give advice to Mr Nazarbayev, goes on to suggest key passages to insert into a speech the president was giving at the University of Cambridge, to defend the action.

Times however are different now as Kazakhstan has continued to strengthen its relations with Russia and China.

The CIA offshoot National Endowment for Democracy is financing some 20 ‘civil society’ regime change programs in Kazakhstan with about $50,000 per annum each. The involved organizations  currently seem to be mostly quiet but are a sure sign that the U.S. is playing a role behind the scenes. On December 16 details of upcoming demonstrations were announced by the U.S. embassy in Kazakhstan.

It is likely that this pre-planned Central Asia part of the ‘Extending Russia’ program has been implemented prematurely as a response to Russia’s recent ultimatum with regards to Ukraine and NATO. Its sole purpose is to unbalance the Russian leadership in Moscow by diverting its attention towards the south.

I however believe that Russia has prepared for such eventualities. They will not affect its plans and demands.

What is difficult to discern though is what is really happening behind the scenes in Astana/Nur-Sultan. Has Tokayev, who was previously seen as a mere puppet of Nazarbayev, really replaced him? His control of the security forces is somewhat in doubt:

Tokayev dismissed the head of his security guard Saken Isabekov. Also, the President dismissed the Deputy Head of the State Security Service of the Republic of Kazakhstan from his post https://t.co/01Oo8DGstk

But the outcome of the whole game is quite predictable:

The grim likelihood, given all the various “revolutions” in the FSU the past 20 years, is that Kazakhstan’s street protests instrumentalized by a powerful clan to replace the ruling oligarchy with a new oligarchy.

The CSTO troops which are now landing in Almaty will take a few days to end the rebellion. The outcome is not in doubt.

Moscow, not Washington DC, will have a big say in who will come out at the top.

It is quite possible that the results of the whole affair will, like the failed U.S. regime change attempts in Belarus, not weaken but strengthen Russia:

#Kazakhstan is another test,after #Belarus,of RUS ability to help stabilize its formal allies w/o alienating their populations. As 1st jt action by CSTO since founding in 1999,it is major test for bloc.Lots of potential pitfalls around,but can be big boon if Moscow succeeds.