The U.S. Is Spending $32 Million Per Hour On War

Above: US Soldiers in Afghanistan, the longest war in US history. Source CNN. 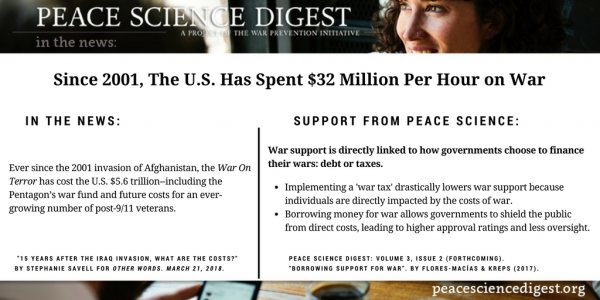 Ever since the 2001 invasion of Afghanistan, the War On Terror has cost the U.S. $5.6 trillion. Almost all of this price tag is financed through borrowed money, significantly increasing the national debt.

“It’s a good time to reflect on what this war — the longest in U.S. history — has cost Americans and others around the world.

First, the economic costs: According to estimates by the Costs of War project at Brown University’s Watson Institute for International and Public Affairs, the war on terror has cost Americans a staggering $5.6 trillion since 2001, when the U.S. invaded Afghanistan. $5.6 trillion. This figure includes not just the Pentagon’s war fund, but also future obligations such as social services for an ever-growing number of post-9/11 veterans.

It means Americans spend $32 million per hour, according to a counter by the National Priorities Project at the Institute for Policy Studies. Put another way: Since 2001, every American taxpayer has spent almost $24,000 on the wars — equal to the average down payment on a house, a new Honda Accord, or a year at a public university.

War support is directly linked to how governments choose to finance their wars: debt or taxes.