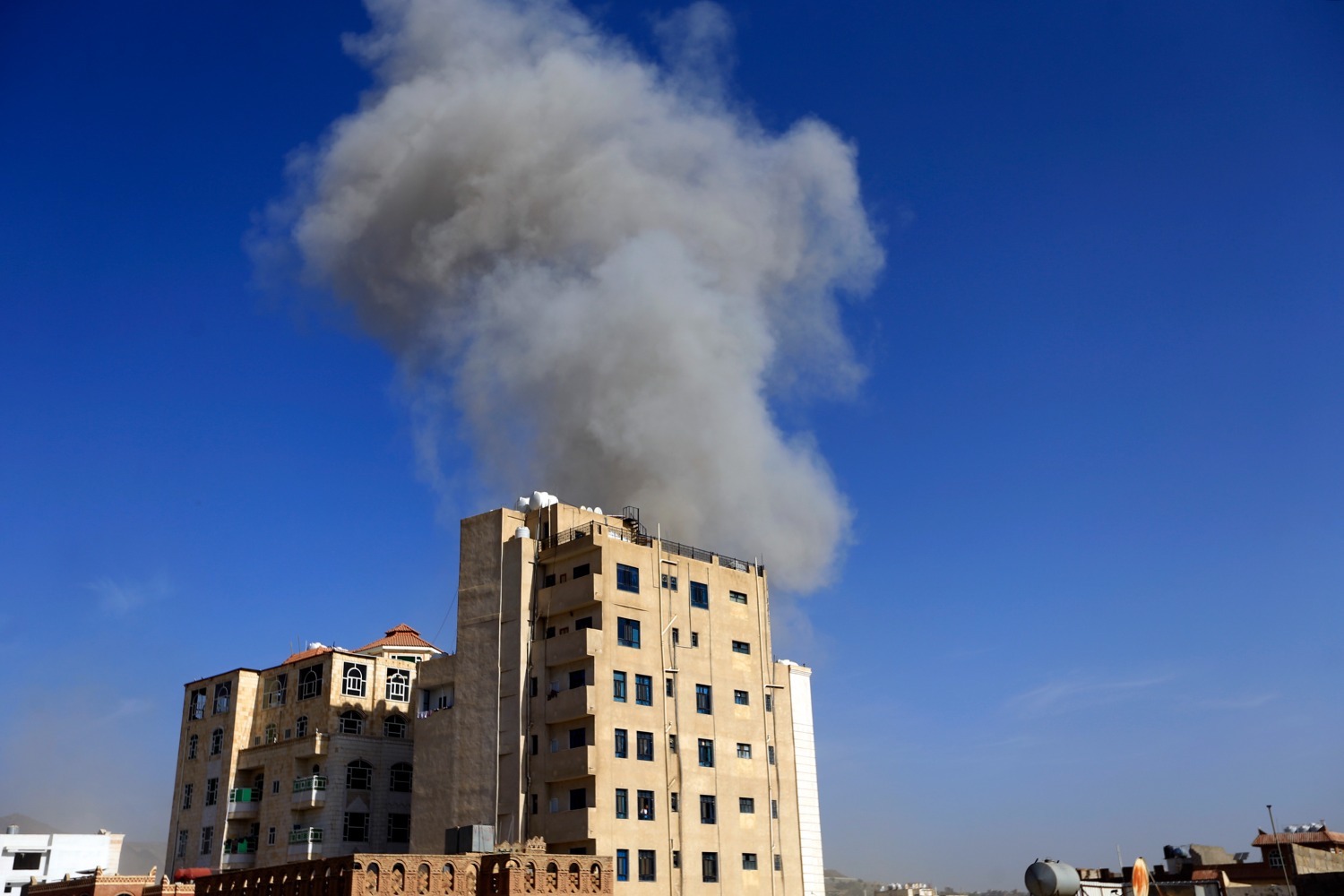 The US Is Wrong On Yemen – Again

Above Photo: Smoke billows following an airstrike in Sanaa, Yemen, on May 16, 2019. Mohammed Huwais / AFP via Getty Images.

The Devastating Cycle Of Tit-For-Tat Attacks Between Saudi Arabia, The United Arab Emirates, And The Houthis Will Not End Via Diplomatic Doublespeak.

Last week, Brett McGurk, the White House coordinator for the Middle East, boiled down the millions suffering in Yemen into a false binary in which Washington has done everything it can for peace. He claimed that the Houthi rebels in Yemen are to blame for the continuation of this seven-year conflict that has become the largest humanitarian crisis in the world. With the Houthis launching ballistic missiles at the United Arab Emirates, and a litany of their own war crimes, it’d be easy to fall for this simplistic analysis of the conflict. Yet, in suggesting that reaching a ceasefire and ending the war is simply up to the Houthis, rather than the Saudi-backed government, McGurk reveals his misunderstanding of the conflict.

For four years, U.S. officials in both Republican and Democratic administrations told me in my work as a human rights advocate that “Saudi Arabia is ready to end the war,” and that it’s just a matter of “finding a face-saving way to exit.” What they mean is, “Is there a way for Saudi Arabia to credibly claim it won the war?” Ignoring the obvious answer of no—Saudi Arabia started a war everyone knew was a mistake—the U.S. government has instead engaged in the business of helping to starve millions of people to assuage crown prince Mohammed bin Salman.

This fealty to the “optics” of Saudi Arabia’s exit from Yemen has taken on various forms over the years. Under the previous administration, that meant silence or statements of support from the executive branch, amounting to a blank check of support for whatever regional plans the Saudi crown prince, the Emirati crown prince, and Jared Kushner cooked up. The Biden administration, McGurk included, seems to have decided that Riyadh is stuck in a war it has little power to end. As usual, U.S. officials are settling for the easy answer in Yemen, not the truthful one.

The civil war in Yemen has always been a local conflict, rooted in various outstanding governance failures, lack of accountability amongst elites, and the corruption inherent in Yemen’s elite patronage-power system, solidified over 33 years of singular authoritarian rule. The longer the conflict has gone on, however, it has become more internationalized, with the Houthis receiving outside military support from Iran following the Gulf coalition’s intervention. Meanwhile, Saudi Arabia and the UAE are also pursuing their own agendas in Yemen, funding proxy militias and colonizing parts of the east and south in pursuit of oil pipelines and power projection.

With the international community doing more to fuel rather than resolve the conflict, primarily through endless restocks of coalition armaments, Yemen has fragmented. Various power centers, nearly all abusive to civilians living under their control, now rule different parts of the country, though one commonality remains their reliance on guns, repression, and a booming war economy for their maintenance of power. The peace process led by the United States and United Nations has remained where it has for years: pursuing a top-down ceasefire between the men with guns—a strategy that has already failed multiple times—instead of engaging Yemen’s vibrant civil society which is interested in peace.

McGurk’s comments since last year claim another reality that the United States and United Nations have engaged in meaningful diplomacy and put forth “new” initiatives, that the Houthis are the problem and, at this point, that the United States merely supports Saudi Arabia’s self-defense. Those “new” initiatives proved to be recycled nonstarters promulgated by the Saudi and Emirati governments during the Trump administration. The Biden administration reversed the Houthi foreign terrorist organization designation levied by the Trump administration, but it also chose to ignore Houthi demands for a unilateral end to the coalition’s blockade as outlandish rather than, as the World Food Programme president stated, necessary to avoid a famine of biblical proportions.

The fact that McGurk cites buying weapons from China as a red line for the U.S. alliances with these abusive monarchies, not the tens of thousands of Yemeni civilians harmed by coalition airstrikes, shows McGurk in his role as Middle East czar is reading from the regional policymaking playbook of the last 20 years. He makes perfectly clear there is zero accountability in the U.S. alliance for either Saudi Arabia or the UAE, let alone for the war crimes committed by all parties to the conflict. Impunity reigned in the United States’ failure to support its European allies’ resolution to extend the mandate of the impartial United Nations war crimes experts for future accountability of all parties to the conflict, including the Houthis, over whom the international community has scarce other leverage.

The impunity driving Biden’s policy has been evident in the apparent decision to continue Trump’s policy of violating U.S. international commitments to missile technology nonproliferation to sell the Emirati government deadly drone hardware. It was evident in the U.S. government’s failure to hold the crown prince of Saudi Arabia accountable for, according to U.S. intelligence, approving the assassination of a Washington Post columnist, well-known activist, and Saudi pro-democracy advocate. And it was evident in the State Department’s failure to condemn the Saudi government’s clear violation of the Geneva Convention by bombing a detention center in north Yemen that killed nearly 100 people last month.

After more than six years of aiding and abetting war crimes, the appointment of a designated diplomat for Yemen was never going to be enough to show that America was serious about pursuing a different course. The Houthi offensive on the Yemeni governorate of Marib—which is in part the result of years of the international community endorsing an unachievable military solution—has kept the international community focused on the battlefield, not on a new approach that seeks to take away momentum from the men with guns.

Meanwhile, business as usual continues, with notifications of millions in new weapons transfers, and all condemnation reserved for the Houthis, with only “deep concern” expressed for Saudi Arabia’s civilian killing. The devastating cycle of tit-for-tat attacks between the Saudis, the Emirates, and the Houthis will not end via diplomatic doublespeak. Since they began in 2016, these attacks outside Yemen’s borders have occurred, time and again, in response to coalition-inflicted civilian harm or supposed aggressive attacks on Yemen. Saudi and Emirati airstrikes in response merely provide more justification and propaganda fodder for more Houthi escalation and local support.

As Yemen scholar Alexandra Stark wrote recently, “Houthi strikes on Abu Dhabi … ought to be seen as an escalation in the fighting, and as a warning from the Houthis that they will target the UAE directly in response to its increased involvement in the fighting” rather than an attack out of the blue. Refraining from further involvement is the best way for the coalition and international community to deescalate this immediate challenge.

The harsh reality is this: Yemen has always been a means to an end for the U.S. government. Only when al Qaeda in the Arabian Peninsula, or a proclaimed “Saudi-Iranian proxy war” arose have policymakers in Washington pay attention. The people now staffing the U.S. government claimed over the last four years that they had learned their lesson in Yemen and, given the chance, they would correct their 2015 mistake that created a man-made famine and entrenched a vicious war with no public debate.

There is no face-saving solution for Saudi Arabia except accepting it has lost in Yemen and unilaterally ending its intervention in favor or talks, as it did in 2010 to secure its southern border. Just like then, the uncomfortable reality is that years of unwillingness to meaningfully negotiate at the conference table instead of on the battlefield has pushed the war to its inevitable conclusion with fewer and fewer viable policy options as time has worn on. Until leadership in Riyadh and Abu Dhabi—and their benefactors in Washington and London—actually stop pursuing a military solution to this conflict, the Houthis will continue doing the one thing they are skilled at: waging war with millions of people paying the price.