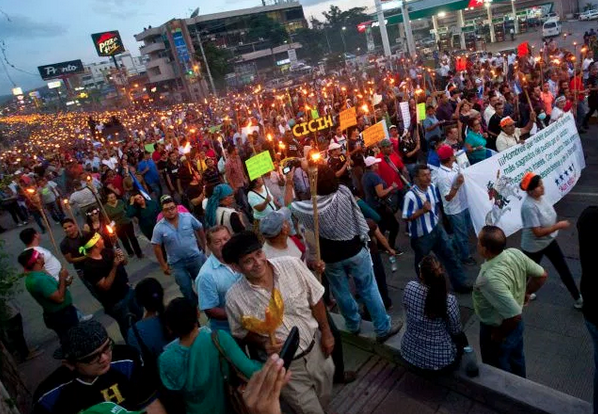 The Ugly Aftermath Of The US Supported Coup In Honduras

As Secretary of State in 2009, Hillary Clinton helped a right-wing coup in Honduras remove an elected left-of-center president, setting back the cause of democracy and enabling corrupt and drug-tainted forces to tighten their grip on the poverty-stricken country.

Imelda Marcos will forever be remembered for her hoard of 3,000 pairs of shoes, an ostentatious symbol of the billions of dollars in spoils she amassed as First Lady of the Philippines. Now shoes are again emerging as a symbol of corruption, this time in Honduras, where prosecutors are investigating allegations that a former first lady improperly purchased, or never distributed, 42,100 pairs of shoes for the poor, at a cost to the state of $348,000.

The allegations are just the latest to surface in a wide-ranging corruption investigation that has reenergized grass-roots politics and triggered a nationwide protest movement in Central America’s original “banana republic.”

Every Friday evening for the past three months, thousands of protesters have marched through the streets of Tegucigalpa and smaller cities, carrying torches and signs reading “The corrupt have ripped apart my country” and “Enough is enough.”

The protesters, who call themselves the oposición indignada (the outraged opposition), demand that President Juan Orlando Hernández be held accountable for fraud and graft, which allegedly bled the national health service of more than $200 million to enrich senior officials and finance the 2013 election.

“This is a really historic time in Central America,” said an analyst for the International Crisis Group. “The question is whether this will really turn into a critical juncture in which society, civil organizations, the private sector and political parties can . . . come together in making the best out of this opportunity [to begin] cleaning up our state institutions.”

Although President Hernández has promised to prosecute the guilty, he has so far refused to follow Guatemala’s example and appoint an independent investigative body under United Nations supervision to attack government corruption. Revelations in Guatemala of customs fraud, political bribery and money laundering have prompted similar weekly protest marches in that nation’s capital and the resignation of the vice president.

The Obama administration has expressed sympathy for anti-corruption movements in Central America, but has yet to acknowledge its failure to protect democracy in Honduras against a military coup in 2009, which set the stage for that country’s current crisis.

Bowing to pressure from conservative Republicans in Congress, Secretary of State Hillary Clinton refused to condemn the ouster of leftist President Manuel Zelaya in 2009. By her own admission, she began plotting within days to prevent him from returning to office.

Her recently released emails show that she sought help from a pro-coup lobbyist for Honduran business interests to establish communications with the new military-backed president. She also approved the continuation of U.S. aid to the illegitimate new regime, blocked demands by the Organization of American States for Zelaya’s return, and acceptedsubsequent presidential elections that were condemned by most international observers as unfair and marred by violent intimidation.

In 2011, President Obama officially welcomed Honduras’s dubious new president to the White House and praised his “strong commitment to democracy.” (His wife is the target of the shoe purchase investigation noted above.)

The coup represented a disastrous step backward for Honduran society as well as its politics. University of California historian Dana Frank observed that “A vicious drug culture already existed before the coup, along with gangs and corrupt officials. But the thoroughgoing criminality of the coup regime opened the door for it to flourish on an unprecedented scale.

“Drug trafficking is now embedded in the state itself . . .  all the way up to the very top of the government . . . A former congressman and police commissioner in charge of drug investigations declared that one out of every ten members of Congress is a drug trafficker and that he had evidence proving “major national and political figures” were involved in drug trafficking. He was assassinated on December 7 [2011].”

Yet the Obama administration has continued giving tens of millions of dollars in aid to Honduran police and military in the name of fighting drugs.

Such crime and corruption have rendered millions of Hondurans destitute and desperate. Two-thirds of its people nowlive below the national poverty level and Honduras’s soaring homicide rate leads the world at nearly one per thousand people each year. These conditions, in turn, fueled a horrifying surge in child migration to the United States.

Seeking to reform conditions in Honduras, Zelaya’s wife ran for president in 2013 on a social democratic platform, but the ruling National Party allegedly stopped her campaign with the help of tens of millions of dollars embezzled from the Honduran Social Security Institute, the national health fund.

“It is widely assumed that Hernández owes his electoral victory in part to these stolen funds,” said Frank. (President Hernández denied knowing the source of the ill-gotten funds and said they amounted to a mere $1.5 million. The prosecutor assigned to the case had to flee the country in the face of death threats.)

Hernández also came under fire for staging the removal of Supreme Court justices to ram through a law creatingautonomous investor zones, independent of normal governance, and overseen by foreign libertarians such as Grover Norquist and Ronald Reagan’s son Michael.

The good news is that the grassroots protests in Honduras are having some effect on the Hernández government. It accepted an outside mediator, appointed by the Organization of American States, to bring together rival parties, along with members of the oposición indignada, to find common ground on a national program of reform.

On Aug. 14, the mediator heard from 50 civil society organizations which identified corruption and political impunity as the major challenges facing the Honduran state and its democratic aspirations. The OAS mediator, who praised the initial round of dialogue, plans to meet next with representatives of the country’s political parties.

Talk is cheap, to be sure. But the official involvement of the OAS, along with increasing interest in Congress in using U.S. aid to support justice in Honduras, offer hope that the demands of the Honduran people will be heard. It may betoo soon to declare a Central American Spring, but that traumatized region at least has reason for hope.