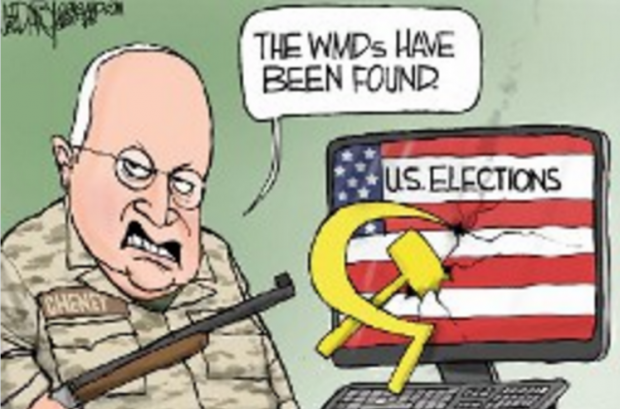 The undeniable patter of “Russian hacking” is that any claim thereof is likely not true and will be debunked in due time.

These remarks on the “Russian hacking” allegation in relation to the U.S. election are therefore quite appropriate:

President Trump again cast a skeptical eye on intelligence community assessments that Russia interfered with the 2016 presidential election, saying Thursday while on a visit to Poland that “nobody really knows for sure” what happened.
…
Trump also compared the intelligence about Russian interference with the faulty assessment that Iraq had weapons of mass destruction in 2002, which provided President Bush with a justification to go to war.”Guess what, they were wrong, and that led to one big mess,” he said.

To frame today’s Trump-Putin talks at the G20 meeting in Hamburg (and to prove the above, timely post correct?) U.S. media issued three new story today implicating “Russian hacking”. The stories are made up of rumors, fearmongering and of reports of banal phishing attempts on some administrative systems. While all three implicate Russia they naturally contain ZERO evidence to anything related to that country.

In the very likely case that the above described pattern of “Russian hacking” holds, all three stories will be debunked within the next few days or weeks.