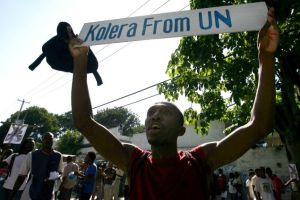 The United Nations And Haiti: 15 Years Of Unilateral War

A domestic political crisis in Haiti in 2004 was used to justify an unprecedented operation; deploying a multilateral military force in a country that was not enduring a civil war, nor attacking other countries, nor committing genocide. A small insular nation, impoverished and in crisis, whose military forces had been demobilized in 1995, then invaded by over 10,000 military and police officers from 31 countries.

According to the United Nations, the Organization of American States (OAS), the United States, France, and Canada, Haiti posed back then an unusual threat to international security. Who were the actors that made up such a great threat? Peasants and poor urban citizens who, in an attempt to escape from agricultural ruin, misery and hunger, made improvised rafts and tried to reach the coasts of Florida. And how were these threatening subjects being encouraged? Well, due to neoliberal commercial and financial liberalization policies implemented by the International Monetary Fund (IMF) and the U.S. State Department since the mid of the eighties. To punish its own pain, Chapter VII of the Charter of the United Nations was imposed on Haiti until today, establishing actions to carry out “in the existence of threat to the peace, breach of the peace, or act of aggression.”

But let’s go back to The United Nations Stabilization Mission in Haiti (MINUSTAH) and its stabilizing troops. Most of them (about 70 percent) came from Caribbean and Latin American neighbors and were sent by progressive governments. It’s worth recalling that Venezuela and Cuba categorically refused to send troops and defended the principle of non-intervention. Most of the military contingents were provided by Uruguay, Brazil, and Argentina. Thanks to French ex-president Jacques Chirac and George W. Bush, the military command would be granted to Brazil, which improved its position closer to the longed for permanent seat in the United Nations Security Council. Delusions for being a great power would soon take Brazil to onerous operations that yielded scarce strategic profit. In an unknown land, their soldiers would carry out the imperial geopolitic’s dirty work, as the agency’s political orientation and military advisory was always under control of the United States. As a strategic by product, a new cohort of troops and officers who would then implement their learning from the Haitian laboratory on the young and racialized population of Brazil’s favelas would be trained in internal repression and population control through humanitarian intervention. Thanks to this, a series of dark generals gained international prestige and today play relevant roles in the Jair Bolsonaro Administration, in key ministries and institutions.

The international community’s war against Haiti was a conflict beyond comparison. It was without combatants, they won without firing once, at least not against any regular force but actually they did regularly against civil peaceful and defenseless populations. A pyrrhic victory in every sense. If warmongering forces justified their military adventures in previous centuries on the pretext of “civilizing,” “evangelizing,” “westernizing,” or “democratizing,” they have now coined the euphemism “stabilizing.” Haiti, the nation whose development has been hindered by western powers for 200 years, should be stabilized. This is why MINUSTAH was created. Devised to act in six months of preparation, its occupation would be extended from 2005 up to 2017, when it would be replaced by the United Nations Mission for Justice Support in Haiti (MINUJUSTH). As Haiti was “stabilized,” the new mission would allegedly focus on favoring the distribution of justice until today, when it would be replaced by yet another mission, this time a political one: the United Nations Integrated Office in Haiti (BINUH). Fifteen years since the military occupation, and 26 years since the first U.N. and OAS civil mission in the country, Haiti clearly is an unstable, unfair, and unequal country. The emergence of criminal groups that equipped themselves by purchasing the weapons suddenly injected by the occupation in the country is only one example of it.

When MINUSTAH was devised, western think tanks, not free from well-intentioned statements, rapidly released a series of ideological justifying arguments: the need to defend “multilateralism (while a unilateral war was staged on Iraq); the principle of “non-indifference” coined by Brazilian diplomacy; the immoral oxymoron of “humanitarian intervention,” the “responsibility to protect,” which presumed a dependent or incapable nation, or “failed” or “fragile” states described by global think tanks. Or the embodiment of racist and colonial creativity, “ungovernable chaotic entities.” There was even an idea of turning MINUSTAH into the beginning of the South Atlantic Treaty Organization (SATO), which was supposed to shape a new concept of regional collective security. Even well-known European left-wing voices, such as the newspaper Le Monde, called for international intervention in its editorial on February 18, 2004: “When can the right to intervention be used? When is it necessary to end the sovereignty of a State? Isn’t it too late to bring safety to the population?” Questions that evidently were mere rhetoric, the same as when under European wars, the colonial left—more pro-West rather than humanist—has already signed  on to the military adventure.

The same as it was under the French Revolution, Haiti once again was the unsurpassable limit in which the alleged universality of western values crashed. The absurdity of history repeated itself to the west of the island in which Jacobins heralded the compatibility of freedom, equality, and fraternity within slavery and colonial plantations. The distinguished U.S. patriot Thomas Jefferson had been more frank in 1801: “As long as we can prevent black people from owning vessels, we can allow their existence and continue having very profitable commercial trade with them. Haiti can exist as a large town of runaway slaves, a Quilombo or a marooned settlement. But the possibility of accepting them within the Concert of Nations is out of discussion.” Two centuries later, the old and venerable U.N. and the western winners of World War II heralded the validity of human rights and the participation of all States into the “concert of nations” while claiming their right for tutelage. Haiti, as a result, was invaded, militarized, ravished, and murdered. The long list of the crimes committed by the U.N. and its unilateral war can be summarized, though not exhausted, in three big points:

1) Massacres and selective murders committed in urban outskirts that actively resisted and faced the international occupation. Its number of victims, most of them youth, is still unknown. Perhaps the most symbolic population control event was the Cite Soleil massacre, in which scores of innocents—most of them underage—were murdered in the country’s most crowded town due to an alleged persecution of criminal groups. According to victims’ associations, MINUSTAH operated from armed helicopters that repeatedly flew over that and other suburbs.

2) The participation and organization of MINUSTAH troops in human trade networks and sexual exploitation of children and women. The most relevant case, but not the only one, was the case of Uruguay’s blue helmets. Soldiers committed an also unknown number of abuses and violations that far from being isolated events were actually war crimes clearly aimed at terrorizing the population through violence on their bodies and territories, as it was recently described by Haitian feminist sociologist Sabine Lamour. To date, the U.N. has recognized only 114 complaints of abuse and exploitation; only 34 of them were even indicted; 11 people were arrested and only once victim was compensated.

3) Introducing the cholera bacteria in a country in which this disease was unknown and which had kept out big cholera outbreaks during the last centuries. The disease would be spread from the MINUSTAH Annapurna camp, introduced by Nepalese soldiers. Despite the well-known epidemic risks related to the mobility of armies, the United Nations did nothing to protect the Haitian population, for example they did not carry out prior tests capable of finding the presence of the deadly bacteria; they neither did proper sewer treatment on fecal contamination by a riverside that reached one of the country’s largest rivers. While 9,000 victims have been officially admitted, different independent experts calculate the real figure would be about 30,000, as well as 800,000 the total amount of people contaminated. In three years, more people died out of cholera in Haiti than in Africa. The U.N. would fake medical reports; hinder health investigations about the origin of the viral strain; and launch a huge disinformation campaign to evade its responsibility. It would take six long years to apologize for it, though rejecting its legal responsibility and so the possibility of being sued or claimed compensations by families of the victims and Haitian associations.

The year in which MINUSTAH ends its term, its boss, Sandra Honore, told EFE that “Haiti is a very different country 13 years later.” She was very careful not to mention the precise sense of the situation that the country finds itself in after a long, stupid and completely unilateral war.