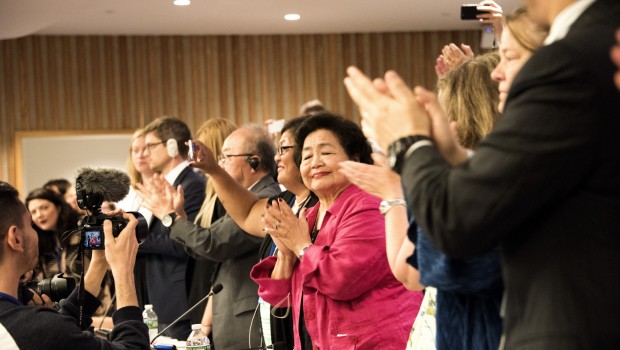 After a decade-long effort by the International Campaign to Abolish Nuclear Weapons (ICAN), and 72 years after their invention, today states at the United Nations formally adopted a treaty which categorically prohibits nuclear weapons.

Until now, nuclear weapons were the only weapons of mass destruction without a prohibition treaty, despite the widespread and catastrophic humanitarian consequences of their intentional or accidental detonation. Biological weapons were banned in 1972 and chemical weapons in 1992.
On adoption of the treaty, ICAN’s executive director, Beatrice Fihn, said: “We hope that today marks the beginning of the end of the nuclear age. It is beyond question that nuclear weapons violate the laws of war and pose a clear danger to global security.

“No one believes that indiscriminately killing millions of civilians is acceptable – no matter the circumstance – yet that is what nuclear weapons are designed to do. Today the international community rejected nuclear weapons and made it clear they are unacceptable.

“It is time for leaders around the world to match their values and words with action by signing and ratifying this treaty as a first step towards eliminating nuclear weapons.”

The Treaty on the Prohibition of Nuclear Weapons was adopted Friday morning and will open for signature by states at the United Nations in New York on 20 September 2017. Civil society organizations and more than 140 states have participated in negotiations.

This treaty is a clear indication that the majority of the world no longer accepts nuclear weapons and does not consider them legitimate tools of war. The repeated objection and boycott of the negotiations by many nuclear-weapon states demonstrates that this treaty has the potential to significantly impact their behavior and stature.

As has been true with previous weapon prohibition treaties, changing international norms leads to concrete changes in policies and behaviors, even in states not party to the treaty. “The strenuous and repeated objections of nuclear-armed states is an admission that this treaty will have a real and lasting impact,” Fihn said.

The treaty also creates obligations to support the victims of nuclear weapons use (known in Japanese as “hibakusha”) and testing and to remediate the environmental damage caused by nuclear weapons.

From the beginning, the effort to ban nuclear weapons has benefited from the broad support of international humanitarian, environmental, nonproliferation, and disarmament organizations in more than 100 states.

Significant political and grassroots organizing has taken place around the world, and many thousands have signed petitions, joined protests, contacted representatives, and pressured governments.

About The Treaty To Prohibit Nuclear Weapons

On 7 July 2017, the United Nations adopted a landmark agreement to ban nuclear weapons, known officially as the Treaty on the Prohibition of Nuclear Weapons. Here we answer some frequently asked questions about how the treaty will operate.

+ What activities does the treaty prohibit?

The treaty prohibits nations from developing, testing, producing, manufacturing, transferring, possessing, stockpiling, using or threatening to use nuclear weapons. It also prohibits them from assisting, encouraging or inducing anyone to engage in any of those activities. In addition, nations must not allow nuclear weapons to be stationed or deployed on their territory.

+ Is the treaty legally binding?

Yes. The treaty is legally binding on those nations that join it.

Yes. Nations must provide adequate assistance to all victims of the use and testing of nuclear weapons, including medical care, rehabilitation and psychological support. They must also provide for their social and economic inclusion.

+ Will the treaty address environments contaminated by nuclear weapons?
Yes. Nations must take measures towards the remediation of environments contaminated as a result of activities related to the use and testing of nuclear weapons. The preamble recognizes the grave implications that nuclear weapons pose for the environment.
+ Will nations meet regularly to discuss implementation of the treaty?
Yes. Once the treaty has entered into force, nations will meet regularly to discuss implementation and take any necessary decisions.
+ Can the treaty ever be amended?
Yes. Any nation under the treaty may propose an amendment. This would then be put to a vote. To be adopted, two-thirds of the nations that have joined the treaty would need to vote in favour of it.
+ What happens if a dispute arises?
If a dispute arises between two or more nations under the treaty, they must consult together with a view to settling the dispute by negotiation or by other peaceful means.
+ Can a nation assert that certain parts of the treaty do not apply to it?
No. The treaty does not allow a nation to make “reservations”. This means that a nation cannot join the treaty and assert that certain provisions of it do not apply to it.
+ Does the treaty establish a secretariat?
No. However, nations could decide at a later stage to establish a secretariat to facilitate implementation of the treaty and promote its norms.
+ Can any nation join the treaty?
Yes. Any nation can join the treaty, whether or not it is a member of the United Nations.
+ Will the treaty exist indefinitely?
Yes. The treaty is permanent in nature.
+ Can a nation withdraw from the treaty?
Yes. In exercising its sovereignty, a nation can withdraw from the treaty. It must provide 12 months’ notice. However, it cannot withdraw if it is involved in an armed conflict.
+ When and where was the treaty negotiated?
The treaty was negotiated at the United Nations in New York from 27 to 31 March and 15 June to 7 July 2017.
+ When was the treaty adopted?
The treaty was adopted on 7 July 2017.
+ Is the treaty available in languages other than English?
Yes. The treaty is available in all six official UN languages: Arabic, Chinese, English, French, Russian and Spanish. Each version is an authentic legal text.