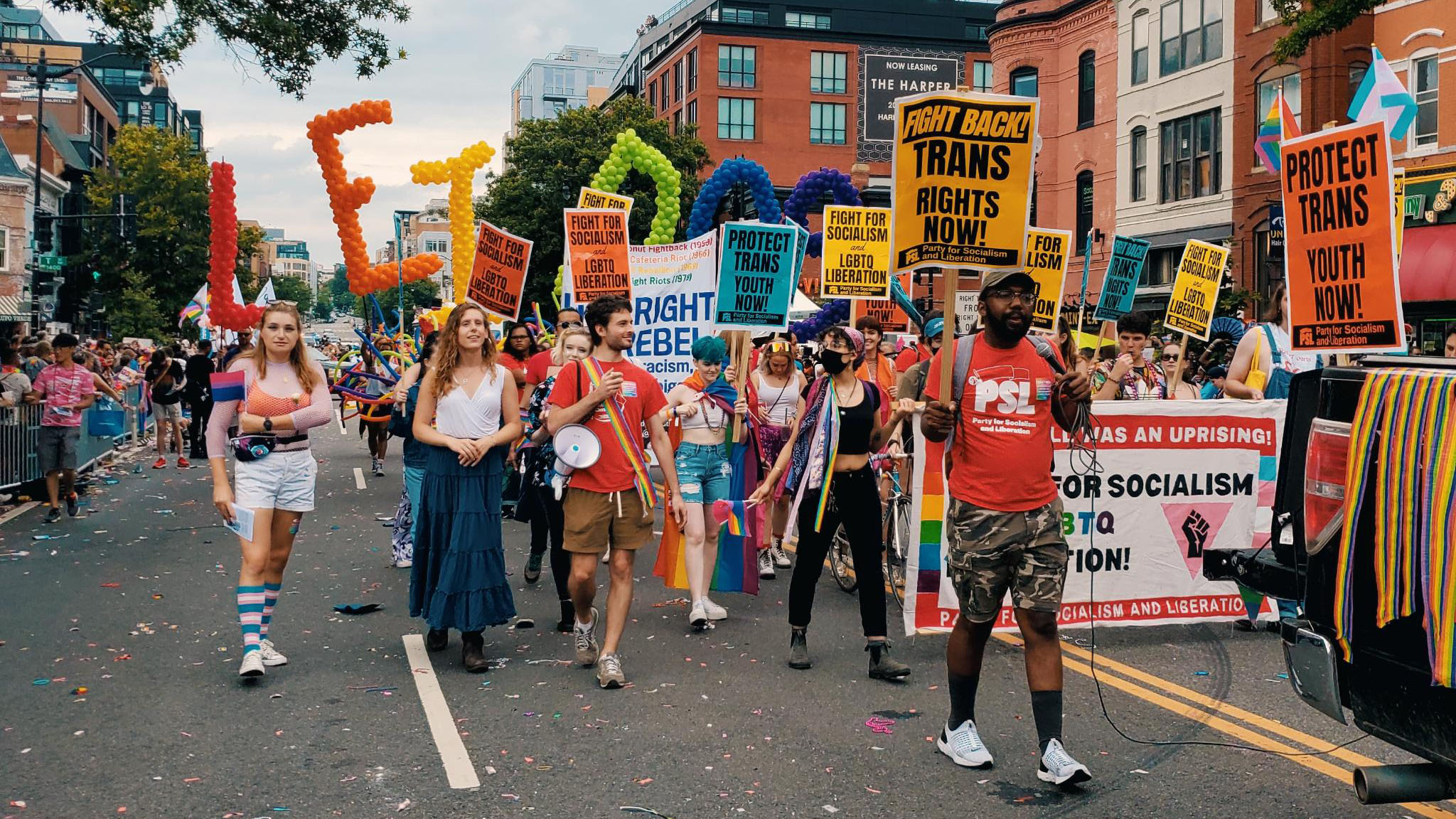 The Unity Of Our Movements Terrifies Them

Above Photo: Morgan (second from left) marching during a Pride parade in Washington DC with fellow members of the Party for Socialism and Liberation.

Transgender rights activist, Morgan Artyuhkina, reflects on recent right-wing attacks on LGBTQ people in the United States on the 53rd anniversary of Stonewall.

The celebration of Pride month in June is in tribute to the Stonewall Rebellion which went on for three days, beginning on the night of June 28, 1969. This rebellion took place at the Stonewall Inn, a bar in New York City, which was and still is a gathering spot for LGBTQ people. At the time of Stonewall, being a member of working-class LGBTQ community in NYC was an act of courage; same-sex love was illegal in every state except Illinois, and police enforced laws mandating three pieces of “gender-appropriate” clothing. NYC Police raided LGBTQ bars constantly. In June 1969 alone, the NYPD raided 5 popular gay bars, 3 were shut down for good.

It was during such a raid that the LGBTQ patrons of Stonewall began to physically fight back against police, sparking a nationwide LGBTQ liberation movement and a day of rebellion that is still celebrated today.

As Pride month comes to a close, Peoples Dispatch spoke to transgender rights activist Morgan Artyuhkina about the recent right-wing attacks against LGBTQ people in the US, how these attacks relate to the history of Pride, and the broader current political context.

Peoples Dispatch: Can you speak about the recent attacks on LGBTQ people in the US?

Morgan Artyukhina: There are so many to choose from, because there have been the legal attacks, the extralegal attacks, cultural attacks, and everything else, too. For example, the order from the Texas government to investigate parents of trans children, who give gender affirming care and treatment to their children as being child abusers, and taking them from their families. Other trans authors have pointed out that the law can be seen as a violation of the United Nations definition of genocide.

You see that too in the recent attacks, as I said in the extralegal attacks by fascist groups, by the Patriot Front and the Proud Boys, and Identity Evropa, and these other groups that have really seized on this idea that trans people or queer people are a danger to children in some way, whether because they claim they’re grooming them sexually, or because they’re imposing their ideology on them. That’s built on the same attitude, these marching orders, that trans children or queer children are the ones that to go after, and attack and alienate and suppress.

That is a very old tactic in the anti-LGBTQ playbook, a very old trope that never gets old, because white supremacists never get tired of defending the “poor little children”.

MA: These are attacks that serve the interests of the capitalist class. They reinforce patriarchy, they reinforce the gendered division of labor that is at the heart of patriarchy and at the heart of the oppression of women. The attack on abortion today is just another part of that same fight, an attempt to force people who are assigned female at birth into being mothers and into parenting children.

But as far as who’s specifically deciding we’re going to go after trans people? It’s hard to say. There are, of course, these groups like the Alliance Defending Freedom (ADF) and the Heritage Foundation that are used to coordinate right-wing political strategy. Heritage is a think tank, so-called, and a lot of these conservative think tanks are academic fora for the real brains behind the capitalist government, the administration of the state.

Why is it happening in 2022? I don’t have a 100% answer for that. I would say in part it has to do with the growing acceptance of trans people, and the fact that we have often served as a convenient boogeyman, and especially the kind of growing acceptance of trans children as well. And especially since 2020. The 2020 uprising wasn’t a movement about trans rights. But we saw the largest protests in defense of trans rights during that uprising, in New York and in Boston and in other places too.

Trans people still serve as a convenient wedge. We’re still scary enough to enough people. So you can say things like, trans women are really men and they’re posing a threat to women’s sports. There’s a convenient dividing line there, and you can use that as a divisive wedge. They’re grasping around for whatever they can to keep our movement divided.

PD: What’s the significance of what’s going on in terms of LGBTQ attacks today, in relation to the history of Pride month?

MA: The Stonewall uprising in June 1969 was about a lot of things, but it also didn’t come about in a vacuum. To the LGBTQ movement, which wasn’t called that at the time, there were actually separate movements for gays and lesbians and transsexuals and transvestites, as they were called at the time, who all kind of thought separately, Stonewall was a big catalyzing moment.

There were, of course, other protests before then: Compton’s cafeteria riot, Cooper’s Do-nuts and the Black Cat, many smaller incidents. But 1969 was catalyzing for many movements, not just for the gay liberation movement, as it became called. Stonewall was initially just another one of those riots. It was not anything special. It was people who had had enough. In the case of the Stonewall Inn, it was a rebellion against mafia control over the gay bars, the police raiding the bars and generally treating the customers awfully. It was the fact that it was illegal for trans people to even wear clothing of the “other gender”, the one they weren’t assigned at birth.

And when the police raided Stonewall, they started taking out all the drag queens and trans people for wearing clothes of the wrong gender. That was a thing that happened at the time.

It also became part of this larger milieu, with the movement against the Vietnam War and with the Black Power movement, and the Black Panthers were rising, and the Young Lords. Marsha P. Johnson and Sylvia Rivera’s group Street Transvestite Action Revolutionaries (STAR) was a part of the Young Lords too, once it was formed in 1971.

It was able to become a gay liberation movement because it was part of this larger milieu. That was what gave it an extra staying power and strength, and it was able to become something that then continued on into the 70s, 80s, 90s and today in all of its various iterations.

There is a danger in that today. A danger for them, it’s a good thing for us, that this stuff is happening as part of a larger milieu today too. As I said, the biggest protest in defense of trans lives happened during an uprising about police violence and white supremacist vigilantism.

That’s what they’re afraid of, why they want to keep us divided, why they’re exploiting these divisions, because they remember what happened last time, and it became a very dangerous force that they used a lot of state power to crush. And I think that terrifies them.

PD: Can you speak about how this recent overturning of Roe relates and it’s connected to the attacks on LGBTQ people?

MA: The fight for abortion access, just as the fight for contraception and related things as well is also a fight against gender assignment at birth. It’s not repudiating a female identity, a woman’s identity as such. But it is refuting a part of that assignment.

Part of being assigned female at birth is being assigned a babymaker at birth. That’s a role that the capitalist class has created for us. And so the fight for abortion access, the fight for autonomy, the fight to determine whether you’re going to be pregnant, pushes up against a core piece of capitalism. You’re fighting for your right to say ‘No, I’m not going to let the capitalist class tell me that I have to do this.’

The fight for trans rights, and for the affirmation of trans identities and trans equality is very much the same thing. It’s saying that we have the right to determine ourselves and to decide what we want to be, and we’re not going to be confined to the roles in which we are assigned by the capitalist class.

And the capitalist class does that, the capitalist system does that because it benefits. It maintains a system of private property, it maintains the division of labor and capitalism where men are the producers who go to work, and then you have women who are the ones who do the reproductive labor. That is what enables the factory worker to go back to work the next day and get exploited all over again. There is an essential role in that division of labor for women and that’s why women are assigned to that role, because it streamlines this system of exploitation.

When you’re trans and you say, ‘I was sure I was assigned male at birth, but I’m actually a woman in my heart of hearts. And there’s nothing that can change that. And I’m going to fight for my right to be who I am,’ you’re fighting against something that is not just a cultural stigma. You’re fighting against a part of the capitalist system that is going to resist that, and always try to fight back and restore that relationship, to make that part of the system function better.

The same thing is happening with abortion now. That’s what I see is the link between these two, is we’re both fighting for our right to reproductive autonomy, for our autonomy over our bodies. And in doing so, we’re going up against patriarchy and capitalism.

And that’s why through our collective force, we might be able to force them to give us concessions out of a fear of a greater struggle being on their hands. With Roe v. Wade, the decision was handed out in 1973, but the case was argued in 1972, and it comes out of that same milieu I was talking about, that Stonewall was in, and the Black Panthers, and the urban uprisings, and the antiwar movement at the same time of the anti-colonial wars in Africa and Asia too.

Roe v. Wade comes out of that. It was made possible by that. That was a right that we were able to force from them, and then now they’re trying to take it back from us and it is always going to be that back and forth until we end capitalism entirely.