The Uprising Is Only Beginning: Building Power To Win Our Demands

The current uprising against police violence and racism is just beginning. It is rapidly shifting public consciousness on issues of policing, violence against Black people and others, and systemic racism. The movement is deepening and becoming broader as well as putting forward solutions and making demands.

The confluence of crises including recent police violence, the COVID-19 pandemic, and economic collapse along with the ongoing crises of lack of healthcare, poverty, inequality, homelessness, personal debt, and climate plus awareness of mirage democracy in the United States have created a historic moment full of possibilities. If we continue to organize and build power, the potential for dramatic change is great.

As we wrote last week, there are dangers coming from liberal Democrats and the black misleadership class who are trying to quell the protests with distractions and weak reforms. To achieve changes that will solve the crises we face, demands must address the root causes of them. And, we must understand the dynamics of demands in social movements – what it takes to win and to hold the ruling class accountable for enacting them. 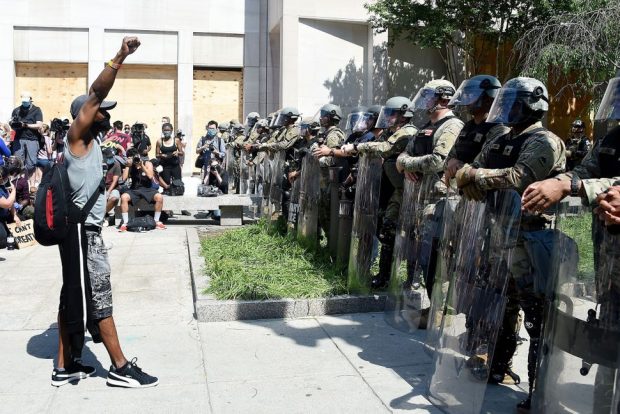 Demands to Defund and Abolish the Police

The demands to defund and abolish police are now part of the national dialogue. This is a major advancement for the movement against police violence. The pushback against these demands is coming from across the mainstream political spectrum from Donald Trump to Joe Biden and Bernie Sanders.

When the bi-partisans unite, they are often wrong as they represent two parties funded by the millionaires and billionaires who put their interests first. Bipartisan means the various wings of the ruling class, represented by the two corporate parties, are uniting and that means a united attack on the people. They seek to protect systems that have created horrendous inequality and injustice. The police are the enforcement arm that protects the ruling class from the population impacted by that inequality and injustice.

Christy E. Lopez, a professor at Georgetown Law School who co-directs the Program on Innovative Policing, has worked inside the government on efforts to reform and control police for 25 years. Her conclusion: “it has become clear to me that ‘reform’ is not enough. Making sure that police follow the rule of law is not enough. Even changing the laws is not enough.”

There is tension within the movement against police violence between those who seek reform and those who want to change the whole system – to abolish policing as it exists and create alternatives. In 2016, activists across the country built encampments to heighten awareness for the demand to abolish the police, provide reparations for victims, and invest in black and brown communities. They demanded “community-based forms of policing in its place that are accountable to residents.”

Advocates of abolition consistently make the point that “abolition requires more than police officers disappearing from the streets. . . Police abolition could mean and require society to decrease and eliminate its reliance on policing.” It also means decriminalizing many activities that result in police abuse, i.e. decriminalizing or legalizing drugs and the untaxed sale of cigarettes that create illegal markets. Police spend more than 90 percent of their time on things people find annoying or social and health issues that police are ill-equipped to handle. These lead to police interactions that result in police violence, especially in black and brown communities.

Kali Akuno of Cooperation Jackson writes that the movement needs to become more radical, not more moderate. He points out that the solutions to the current crisis are deeper than reforming the police, explaining there are “calls to eradicate white supremacy, capitalism, heteropatriarchy, and settler-colonialism that have been on clear display.” The founding of police came out of the most extreme form of capitalism, slavery, where those with money owned other people as unpaid workers. Slave patrols developed into modern-day police so the very root of policing is rotten.

“The core issue is POWER, not racism. We cannot change our reality by ending ‘racism,’ or the attitudes and opinions others hold of us. Our conditions will only change when we shift power into our own hands and exercise self-determination, thereby rendering the opinions of racists irrelevant.”

When it comes to changing the power dynamic, one demand — democratic community control of the police — stands out among the others. Communities being able to hire and fire police officers, review their budgets, impanel a grand jury to investigate crimes, and approve police contracts among other changes, reverse the power dynamic. The people would be in democratic control of how their communities are policed and by whom. This is a long-term demand dating back to the Black Panthers, as Green presidential candidate Howie Hawkins points out. This transition to people-power over police is seen by many as the key transition step to abolition or replacement of the police.

Rameau and Freeman conclude that “the police MUST exist in order to protect property and wealth from those who do not have.” They argue that defunding police without changing that dynamic means the wealthy elites will find other ways to protect themselves, private police who are even less accountable than the public institution.

Akuno urges “the demand for abolition should be raised to heighten the contradictions. But, it must be accompanied by the call for revolution, and the organizing effort to dismantle the entire system.” He adds we “have to resist the elevation of the liberal and Democratic party narratives and positions. We have to assert a counter-narrative in all arenas — one that aims towards transforming the Floyd rebellion into something potentially transformative.” 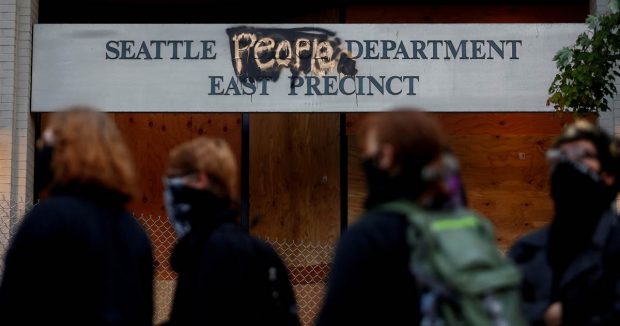 People stand in front of the Seattle Police Department’s East Precinct sign in the “Capitol Hill Autonomous Zone” while continuing to demonstrate against racial inequality and call for the defunding of Seattle police in Seattle on Tuesday, June 9, 2020.By Lindsey Wasson / Reuters.

The power structure has started to make some concessions over the past few weeks of protests, but none of these has altered the systems that maintain the current inequalities and injustices.

Some police have been fired and charged for committing violence and murder. It remains to be seen if they will be convicted and kept from policing anywhere in the future. Some cities are talking about defunding or disbanding the police, but it remains to be seen what the details will be. Schools are breaking contracts with police. More segments of the population from the media to athletes to tech companies are challenging racism and oppression in our society. These changes are happening because the people power being displayed has exposed injustice, garnered support and put the elites in a panic. The elites need to give the people something to stop the protests.

The widespread actions of militarized police using extreme violence across the country backfired and resulted in the protests growing. Federal courts in Colorado and Washington ordered governments to stop using chemical warfare against US citizens. Adding 17,000 National Guard troops in 23 states caused the National Guard troops’ morale to plummet in embarrassment over using military force to stop people from exercising their constitutional rights. President Trump’s threat of military force caused divisions in the military as retired and active generals, GI’s and National Guard troops spoke out against it.

Popular power is growing in the United States, but to build enough power to win demands that significantly alter the economic and political systems will require sustained effort. While some reforms are significant because they may meet some needs of those in the movement, we can’t stop there.

As we describe in the second class of the Popular Resistance School, if movements make concessions too early, before they have the power to make sure their demands are met and to hold leaders accountable for their actions, they will fail. The ruling class will often feign concessions to quiet the rebellion knowing all along that they are still in control.

Gov. Andrew M. Cuomo, after signing a police reform bill, exemplified this when he said, “You don’t need to protest, you won. You accomplished your goal.”

When negotiating demands, it is all about power. If the sides coming together to negotiate do not have equal power, then the weaker side will lose. They may be given promises, but they can’t force the power holders to keep them. It is significant that elements in the society are opposed to military attacks on people expressing their First Amendment rights, but we must continue to heighten the conflict until there are real splits within the power structure.

In order to maintain their power, the ruling class requires support from the people.

The bottom line is that we have the ability to remove power from the ruling class and that must be our goal if we are to win the changes we need in this moment of multiple crises. The seeds of transformation have been planted, now it is our task to nurture them.

We do that by putting out a vision of the changes we require and continuing to protest in support of that vision. We need to build relationships with others in our community to raise awareness of the crises and how to stop them. We need to support each other through mutual aid and building alternative systems to meet basic needs. Through our collective effort, we can stop the destructive machine and create a new world.