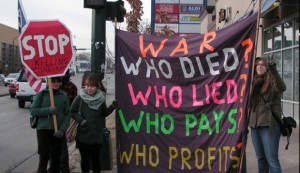 The US American Way Of War

Intentional Killing of Civilians and Destruction of Civilian Infrastructure

October 19, 2015 – In Viet Nam, being terribly ignorant like so many others, I “accidentally” discovered, against my greatest wishes, that the US was systematically targeting for destruction, schools, hospitals, churches, and inhabited, undefended villages, often by low-level napalm and 500 pound bombs. These were not accidental. US Army intelligence personnel admitted that hospitals had been routinely listed as targets: “The bigger the hospital the better it was”. Classified USAF bombing manuals defined hospitals, schools, and churches as ‘psycho-social targets’ useful for dissolution of civilian order and decimating morale(1). The US destroyed 13,000 of their 21,000 villages (North and South)(2), murdering upwards of 6 million peasants in South and North Viet Nam, Cambodia, and Laos(3). The US also destroyed over 15,000 bridges; almost 3,000 high schools and universities; 350 hospitals; 1,500 maternity wards; and 950 churches and pagodas(4).

But, from our origins, the US political-military policy, rooted deeply in Eurocentric racism, has revealed an intention to kill civilians and noncombatants alike, and civilian infrastructure.

From the 1600s on, hordes of Eurocentric frontier settlers, speculators, surveyors and other opportunists were establishing permanent settlements as they moved westward from the ribbon of colonies hugging the Atlantic coast, destroying Indigenous settlements in their way. Following the cessation of the Seven Years War (the last of the four so-called “French and Indian Wars”) in 1763, this conquering of Indian lands intensified further. Throughout the 1770s, while the original ideas and actions of the First US American Revolution were being hatched by farmers in town meetings in Massachusetts(5), armed men were roaming through regions such as Kentucky and along the Ohio, surveying likely “development” sites for eastern speculators such as George Washington, Thomas Jefferson, et al., provoking increasingly violent retaliation by Indigenous societies who had long inhabited the lands(6).

In 1779, the Continental Congress ordered Supreme Commanding General George Washington to destroy the Native Iroquois nations in upstate New York. The Iroquois, considered the most advanced Indian federation in the New World at that time, were desperately defending the preservation of their agricultural practices on sacred ancestral lands, which were being threatened by encroaching European settlers. Four of the six Iroquois nations had allied themselves with the British, who were protecting their sovereignty. The invading and occupying settlers, aggressively seeking land(7), formed a Continental Army to assure their successful occupation of these “empty” lands. They believed, as Winthrop had earlier prophesized, they were God’s chosen people with the eyes of all people watching them as they conquered the New World(8).

On May 31, 1779, General Washington dutifully obeyed and ordered Major General John Sullivan to train and equip his 4,500 soldiers to battle these “merciless Indian Savages.” Making up his contingent was more than one-quarter of the Continental Army soldiers at the time. In preparing for the campaign, on July 4, 1779, Sullivan’s officers offered a toast, “Civilization or death to all American savages.” The campaign would be the largest Revolutionary War battle of 1779(9). Washington’s orders(10):

The Expedition you are appointed to command is to be directed against the hostile tribes of the Six Nations of Indians, with their associates and adherents. The immediate objects are the total destruction and devastation of their settlements, and the capture of as many prisoners of every age and sex as possible. It will be essential to ruin their crops now in the ground and prevent their planting more.

I would recommend, that some post in the center of the Indian Country, should be occupied with all expedition, with a sufficient quantity of provisions whence parties should be detached to lay waste all the settlements around, with instructions to do it in the most effectual manner, that the country may not be merely overrun, but destroyed.

But you will not by any means listen to any overture of peace before the total ruinment of their settlements is effected. Our future security will be in their inability to injure us and in the terror with which the severity of the chastisement they receive will inspire them.

A terrorist, scorched-earth campaign ordered and sanctioned by the Continental Congress, the Sullivan campaign was nothing short of a massacre of a civilian population. It ranks with Sherman’s horrendous March to the Sea in 1864 and US search-and-destroy missions ordered during the Viet Nam war. Forty well-established Seneca towns were totally destroyed, with the dwellings looted and torched, cornfields and fruit orchards burned. Where women and children were discovered, they were slaughtered. Within one month of the September 1779 assault, the Iroquois agricultural domain had been destroyed. As a nation they never fully recovered(12). Sullivan’s men returned with the scalps and tanned skins of their brutalized enemies, the latter fashioned into leggings(13).

Between 1775 and 1891, 5,000 whites were killed in individual “affairs” with Indians while killing 8,500 Indians, for a total of 13,500 total deaths(16). Many of those deaths are almost certainly attributed to settlers and investors/speculators engaged in activities the equivalent of today’s paramilitary or death squads operating outside of “official” channels. Such operatives commonly work for the rich against the impoverished, functioning in a manner that avoids being noted in any public record. It seems ironic that this behavior was occurring on the eve of the American Revolution that promised to usher in a new freedom. But freedom for whom?

Military historian John Grenier concludes that the birth of a uniquely American way of war shifted the focus from tactics (i.e., a transition from defensive to offensive) to logistical destruction and total war culture. What distinguished colonial forces in America from English forces in the Old World was their commitment to irregular and total war: targeting enemies’ logistical resources, such as crops, food stores, villages, and noncombatants, rather than enemy troops themselves, who often proved too elusive. From the Indian wars of the early seventeenth century to the War of 1812, this strategy proved successful in undermining adversaries’ ability and will to sustain the war effort(17).

Grenier concludes that acts of extravagant violence against noncombatants and civilian logistics in the nineteenth and twentieth centuries seem not as aberrations from the American way of war but as a re-emergence of Americans’ first way of war. He describes the advent of rangers for this purpose – special forces, special ops, irregular forces, etc.

3. The Vietnamese government reported 2 million civilians killed in the north and 2 million civilians killed in the south for a total of 4 million civilians killed. In addition, they reported 1.1 million military fatalities. Thus, 5.1 million Vietnamese were killed, not counting South Vietnamese soldiers, from 1954 to 1975 [Agence France, April 4, 1995; BBC News Vietnam War History archives]. South Viet Nam counted 223,748 of its fighters dead [Horst Faas and Tim Page, REQUIEM By the Photographers Who Died in Vietnam and Indochina (New York: Random House, 1997), 36]. Thus there were more than 5.3 million Vietnamese casualties. Edward S. Herman and Noam Chomsky concluded that in addition to 4 million or more killed in Viet Nam, there were 350,000 dead in Laos, and 600,000 in Cambodia (1969-1975), for a total of 4.95 million Southeast Asians killed [Herman and Chomsky, Manufacturing Consent (New York: Pantheon Books, 1988), 184, 260, 263]. Encyclopedia Britannica, Vietnam War, 1954-1975 reports Vietnamese official estimates of 4 million Vietnamese civilians killed, 1.1 million North Vietnamese and Viet Cong fighters killed, as many as 250,000 South Vietnamese soldiers killed, along with over 63,000 soldiers from the US, South Korea, Australia, Thailand, and New Zealand. Thus, as many as 5.4 million people died in the Viet Nam war, exclusive of Laos and Cambodia. When using Herman’s and Chomsky’s figures for 350,000 killed in Laos, and 600,000 in Cambodia, the total casualties would be nearly 6.4 million.

7. Lucrative subsidies of stolen land were what made our early nation’s economy profitable, subsequently secured by the subsidy of free labor. Without these subsidies, the settlers could not have succeeded.

11. The US has a long pattern of preventing, not wanting peace. In November 1951, there was a temporary cessation of shooting in Korea the day after an agreement on a cease-fire line. Washington experienced near hysterical fear as the US and Syngman Rhee feared Korean peace would be the political end of them. And Secretary of State Dulles feared that peace would severely interfere with a plan to build the old axis powers, including now Japan, for a new anti-Soviet crusade. Commander of US forces in Korea, General Van Fleet, confirmed this when making a public speech in 1952: “Korea has been a blessing. There had to be a Korea either here or some place in the world” [I.F. Stone, The Hidden History of the Korean War, 1950-1951 (New York: Monthly Review Press, 1952), 345-348]. In May 1986, US Cabinet-level officials were alarmed that the Sandinista government in Nicaragua had agreed to sign a peace plan ending the US Contra war. Washington portrayed the plan as unacceptable “while denouncing the Sandinistas for refusing to negotiate.” One US official was reported to have said “there was a peace scare” [Joel Brinkley, New York Times, August 6, 1987]. New York Times columnist Anthony Lewis said of the Reagan administration: “They want war. That is the policy…As Mr. Wright [Speaker of the House] said, they ‘are scared to death that peace will break out’” [New York Times, November 19, 1987].

16. Report on Indians Taxed and Indians Not Taxed In the United States (Except Alaska) at the Eleventh Census: 1890, p. 637.