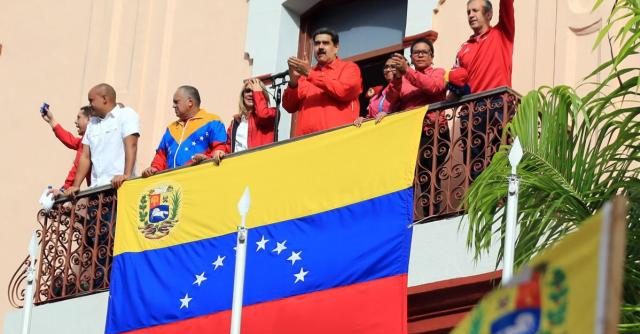 The US Coup: New Attempt To Eradicate The Chavista Revolution

For over two years we have been told Putin’s Russia has interfered with the 2016 US presidential elections. We now find the US government has decided it can unilaterally invalidate the actual presidential elections in Venezuela and recognize a person of its choosing as president. This is one more US-backed coup attempt against a progressive Latin American government, following Venezuela (2002), Haiti (2004, and every following election), Bolivia (2008), Honduras (2009), Ecuador (2010, 2015), Paraguay (2012), Nicaragua (2018).

Trump issued this statement on January 23:

Today, I am officially recognizing the President of the Venezuelan National Assembly, Juan Guaido, as the Interim President of Venezuela.  In its role as the only legitimate branch of government duly elected by the Venezuelan people, the National Assembly invoked the country’s constitution to declare Nicolas Maduro illegitimate, and the office of the presidency therefore vacant.  The people of Venezuela have courageously spoken out against Maduro and his regime and demanded freedom and the rule of law.

I will continue to use the full weight of United States economic and diplomatic power to press for the restoration of Venezuelan democracy…. We continue to hold the illegitimate Maduro regime directly responsible for any threats it may pose to the safety of the Venezuelan people.

In response to Vice President Mike Pence’s provocation the day before, President Maduro stated, “What the US government has done is to give the order to carry out a fascist coup d’état… Never before has a high-level official said that the opposition should overthrow the government… this has no historical comparison in the 200 years of US-Venezuela relations.”

In fact, we may have to go back to Theodore Roosevelt’s creation of the nation of Panama out of Colombia in 1903 to find an appropriate comparison.

The US has sought to destroy the Chavista Bolivarian movement since its origin twenty years ago. Obama, in a statement more out of touch with reality than Trump’s, declared Venezuela an “extraordinary threat to the national security” to the United States, and ever since, the US has imposed more and more sanctions, even blocking sales of food and medicine to Venezuela.  These sanctions cut Venezuela off from refinancing foreign debt, and greatly interfere with its international trade. These brutal economic sanctions are inhuman and illegal under the Organization of American States (OAS) and the United Nations charters.

Nicolas Maduro was re-elected President of Venezuela on May 20, 2018, with 67% of the vote. Before the election, during the late spring and summer of 2017, anti-government protesters waged a violent street campaign and the opposition called for immediate presidential elections to terminate the Chavista revolution.

This attempted coup came to naught with the turnout in the July vote for the Constituent National Assembly. Then in the fall of 2017, the Chavista government and the opposition began meeting for mediation talks, facilitated by former Prime Minister of Spain Luis Zapatero, in the Dominican Republic. It was eventually agreed to call for early presidential elections, but in the meantime, the opposition decisively lost gubernatorial elections and municipal elections.

Both the government and opposition were to sign an accord, but the US then intervened in the mediation talks and pressured the opposition into abandoning the talks.

The US-backed hardliners in the opposition then called for a boycott the May 2018 presidential election in an attempt to delegitimize the electoral process, but this again failed.

Having repeatedly failed to unseat Maduro, the US sought to block his re-inauguration. It began instructing OAS General Secretary Almagro back in spring 2017 to declare Venezuela in a “humanitarian crisis” requiring foreign intervention. This repeatedly failed, as Almagro could never muster an OAS majority. The US then set up the Lima Group, made up of 13 of the more rightwing Latin American governments to orchestrate the destruction of Chavista Venezuela.

On August 4, 2018, the US-backed opposition turned to assassination but failed in a drone attack attempt on  Maduro and the military general staff.

On January 4, 2019, the US-allied Lima Group, with the notable dissent of Mexico, said that it would not recognize Maduro as the president when he was to be inaugurated January 10.

This interference into the internal affairs of Venezuela is a clear violation of the sovereignty of Venezuela and international laws such as the charters of both the United Nations and the Organization of American States.

Russia, Bolivia, Turkey, Iran, China, El Salvador, Cuba, Mexico, Uruguay, and Nicaragua have all made statements in support of Nicolas Maduro as the legitimate president of Venezuela.

The Venezuelan military announced it will defend the constitution and national sovereignty, and elected President Maduro. The only way the coup can succeed, as it lacks the support of the Venezuelan military,  is with military help from a foreign power, the obvious candidates being the US, Brazil, and Colombia.

In his January 23 speech (pictures) Maduro gave the US Embassy 72 hours to get out and broke relations with the US over this latest coup attempt. The US puppet “president” Guaido declared Maduro illegitimate and declared the US Embassy can stay.

Secretary of State Pompeo stated that Maduro does not “have the legal authority to break diplomatic relations with the United States or to declare our diplomat’s persona non grata” and vowed to “protect” them. Senator Marco Rubio called on the US to expel Venezuelan diplomatic staff and accept a new set of diplomats appointed by Guaidó.

The Guardian quoted Eric Farnsworth, a former US diplomat and vice-president of the Council of the Americas, who said “[Maduro might] turn sharpshooters on crowds and try to scare everybody back home.”

This ploy of using sharpshooters to kill demonstrators has become a standard technique the US uses to instigate a coup. We saw it in Venezuela itself in 2002, in Iran 2008, in Syria in 2011, Ukraine in 2014. The corporate media would then begin a campaign about the cost of “world” inaction as Maduro allegedly massacres his own people, and the “world” (meaning the US) would be “forced” to intervene.

On January 24 the US took to the OAS a declaration to recognize Guaido as the president of Venezuela, but this was again defeated, with 18 voting against and 16 voting for.

So far the Maduro government has not arrested Guaido, who is apparently ensconced in the Colombian Embassy. The Chavista governments have periodically displayed indecisiveness during key points in their process, going back to Chavez not jailing the leaders of the failed US coup in 2002. But the oligarchy’s opposition likewise consistently botch their own plans and discredit themselves even in the eyes of their own supporters.

Inside Venezuela, the mobilization of people on the streets is a key determinant of the outcome of this attempted coup. Even though the country has been battered by a severe economic crisis, caused by a major fall in the price of oil, hoarding by private businesses (which still dominate the economy), US and European Union sanctions, corruption, and the ineffective responses of the Maduro government, the Chavistas can mobilize many more on the streets than the oligarchy’s opposition. The opposition itself is plagued by severe divisions between moderates, who prefer to work within the system, and the radicals, backed by the US, who seek to destroy it.

The strength of the anti-imperialist feeling amongst the Venezuelan masses should not be underestimated either. Moreover, the military is at least 235,000 strong and the grassroots has about 1.6 million in militias.

Washington has already floated the idea of embargoing Venezuelan oil (one-third of US imports), and could even seize CITGO, the Venezuelan owned company.

Meanwhile, the Democrats and the anti-Trump Resistance, who proclaim Trump a pawn of Russia (which is an ally of Venezuela), have mostly gone mute concerning Trump’s choosing a US puppet as the new “elected” president of Venezuela.

Representative Tulsa Gabbard did make a clear statement of opposition to US interference:

The United States needs to stay out of Venezuela. Let the Venezuelan people determine their future. We don’t want other countries to choose our leaders–so we have to stop trying to choose theirs.

A US backed coup in Venezuela is not a solution to the dire issues they face. Trump’s efforts to install a far right opposition will only incite violence and further destabilize the region. We must support Mexico, Uruguay & the Vatican’s efforts to facilitate a peaceful dialogue.

Ro Khanna and Alexandria Ocasio-Cortez have also raised some objection.  Bernie Sanders issued a more ambivalent statement as if trying to please everyone.

“The Maduro government in Venezuela has been waging a violent crackdown on Venezuelan civil society, violated the constitution by dissolving the National Assembly and was re-elected last year in an election that many observers said was fraudulent. Further, the economy is a disaster and millions are migrating.

“The United States should support the rule of law, fair elections and self-determination for the Venezuelan people. We must condemn the use of violence against unarmed protesters and the suppression of dissent. However, we must learn the lessons of the past and not be in the business of regime change or supporting coups – as we have in Chile, Guatemala, Brazil, and the Dominican Republic. The United States has a long history of inappropriately intervening in Latin American countries; we must not go down that road again.”

Nicolas Maduro was first elected president in 2013, and the record since then shows the US has repeatedly tried to unseat him and eradicate the Bolivarian revolution, always meeting with failure. The record also shows the US and European Union have continually imposed harsher and harsher sanctions on Venezuela, increasing the suffering of the Venezuelan people in the name of “democracy” and “freedom.” Further coup attempts and sanctions are in the works, and the peace movement in the US needs to more actively defend Venezuela against US aggression.