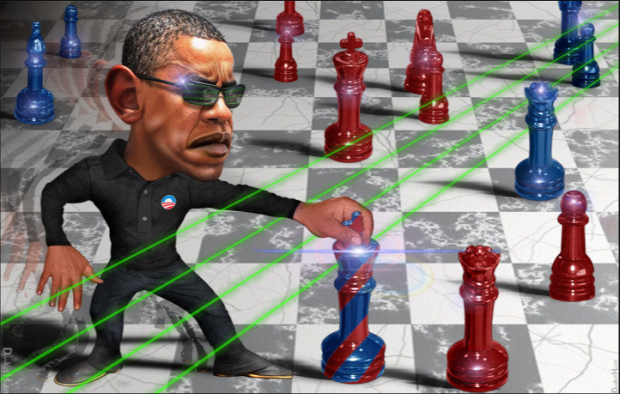 The US Economic Invasion Of Cuba

Above Photo: Flickr/ DonkeyHotey. Barack Obama – On the Verge of Victory

Note: The article below describes Obama’s economic invasion of Cuba, will Cuba be able to withstand the economic co-option of their country by US big business the way they have withstood the economic embargo, military attacks, US AID coup efforts and numerous assassination attempts on Fidel Castro?

William Blum, a historian of US Empire writes: “The CIA’s motto might well be: “Proudly overthrowing the Cuban government since 1959.” Now what? Did you think that the United States had finally grown up and come to the realization that they could in fact share the same hemisphere as the people of Cuba, accepting Cuban society as unquestioningly as they do that of Canada?”

Is the economic invasion a new era of the US no longer seeking regime change or a new tactic to work toward that goal?   KZ

President Barack Obama traveled to Cuba on Sunday, leading an enormous US delegation that has been reported as comprising as many as 1,200 people, large enough to be described with some justification as an invading force of American politicians and corporate executives.

With the trip, Obama becomes the first sitting president to visit the country since 1928, when Calvin Coolidge arrived on the USS Texas. While Obama flew into Havana aboard Air Force One and not a naval gunboat, the trip is no less a projection of US imperialism’s power over its impoverished island neighbor.

Symbolic of the future role the US envisions for itself in Cuba, Obama and his family, including wife Michelle Obama, daughters Sasha and Malia, and his mother-in-law, will be staying at the US ambassador’s residence. The residence, a 32,000 square foot neoclassical mansion half the size of the White House, was built in 1941 as a winter residence for the US president, and was completed during the same period that the US government built up the Guantanamo Bay Naval Base on the eve of US participation in the Second World War.

After arriving on Sunday, Obama is expected to greet Cardinal Jaime Ortega at Havana’s cathedral. Ortega played a key role in the secret negotiations facilitated by Pope Francis that resulted in the 2014 agreement between Obama and Cuban President Raúl Castro to restore diplomatic relations between the two countries.

On Monday, he is expected to lay a wreath at the José Martí Memorial, after which he will meet Raúl Castro for an official meeting at the Palace of the Revolution. In the afternoon he is to be part of an “entrepreneurship summit” to which hundreds of Cubans have been invited, and will take part in a formal state dinner in the evening. On Tuesday, he is expected to give a speech that will be broadcast on Cuban television, followed by a meeting with Cuban dissidents at the US Embassy.

Underscoring the extent to which economic motivations are a primary consideration in the US moves toward closer relations, the US delegation includes four cabinet secretaries, including Commerce Secretary Penny Pritzker, billionaire heiress to the Hyatt hotels fortune, Agriculture Secretary Tom Vilsack, Secretary of State John Kerry, and the administrator of the Small Business Administration, Maria Contreras-Sweet.

A bipartisan group of at least 38 members of Congress are also reportedly accompanying Obama. Eight senators will be in Cuba, including Dick Durbin, the second-highest ranking Democrat in the Senate, and Patrick Leahy, the Senate’s longest-serving member. Thirty members of the House of Representatives will be there as well, most notably Nancy Pelosi, the House Minority Leader.

Representing US business interests are Marriott CEO Arne Sorenson, Xerox CEO Ursula Burns, CEO of PayPal Daniel Schulman, CEO of FUBU Daymond John, and Brian Chesky, the president and founder of Airbnb. Also present will be Julie Hanna, the CEO of Kiva, an organization specializing in crowd-funded “micro-loans” and one of the partners in Cleber, an Alabama-based company that has received authorization to build a tractor manufacturing facility in Cuba.

Aside from these individuals, the US Chamber of Commerce is leading a large delegation, as is Major League Baseball, which will have around 200 people in Cuba. Among them are Commissioner Rob Manfred and other top officials, as well as the Tampa Bay Rays, who are scheduled to play an exhibition game for Obama and other grandees on Tuesday against the Cuban national baseball team.

The large influx of US corporate and government officials has reportedly taken up 1,200 hotel rooms and displaced travelers during the days of the visit, with prices for hotel rooms tripling to $600 per night.

The move toward a normalization of relations and an end to the long-standing Cuban embargo is being carried out under pressure from US business interests, who are not interested in standing by while European rivals, regional powers such as Brazil, and especially China, reap the lion’s share of profits from doing business in Cuba as Cuban leaders open up the Cuban economy to direct foreign exploitation.

As such, the US visit is very much part of a renewed effort on the part of US imperialism to shore up domination in “its own” hemisphere after what it sees as substantial incursions on the part of China and the growth of influence of Brazil in the region. Notably, the massive Brazilian construction company Odebrecht, which is now under fire for its involvement in the corruption scandal engulfing the Brazilian government, was principally responsible for the expansion of the port of Mariel, which can accommodate Chinese ships passing through the Panama Canal.

The changes already made to open up relations between the US and Cuba have resulted in a large increase in economic activity. Regularly scheduled commercial airline service will resume later this year, with up to 110 flights per day. United Airlines recently announced that it would start offering service out of four US cities.

In the past week, US telecom company Verizon signed a deal that allows direct calls and roaming access for Verizon customers. Sprint concluded a similar deal in November of last year, while AT&T is currently negotiating with Cuba’s national telecom company, ETECSA.

Carnival Cruise Lines has announced that it will begin offering seven-day cruises departing from Miami starting in May that would allow “cultural, artistic, faith-based and humanitarian exchanges between American and Cuban citizens.” Carnival CEO Arnold Donald expressed frustration over the current requirements, saying, “We can only do so much under the cultural exchange [style of travel]. Right now we only have the one ship. Once the embargo is lifted you will have many, many ships going.”

Marriott and Starwood Hotels and Resorts announced on Saturday that they had signed deals to run three hotels in Cuba, making them the first companies to do so since 1959.

On Sunday, US-based Airbnb, a company which matches individuals who wish to rent out their homes or apartments to travelers, was given a Treasury Department license to expand their business in Cuba to all travelers, not just those from the US, which they had been doing for the past year.

Despite hypocritical denunciations of Obama, particularly from certain sections of the US ruling class and the extremely right-wing older generation of Cuban exiles, that his visit represents an abandonment of the concern for Cubans’ “human rights,” support for the embargo has declined enormously. This is particularly true of the younger generation of Cuban-Americans.

To a large extent, the degree to which the supposed concern for human rights is invoked corresponds to US ruling-class divisions about whether there needs to be a “regime change” before an end to the embargo, or whether that can be put off temporarily until the incursion of US business interests has sufficiently groomed a more pliant and privileged layer among the Cuban dissident population. Obama’s visit reflects a shift among large sections of the US ruling class toward the latter policy.

For its part, the Cuban Communist Party has been doing all it can to prove that it will be a valuable partner in the exploitation of Cuban workers in the manner of the Chinese Communist Party. Along with frantic activity to repave roads and shore up security in anticipation of Obama’s visit, language surrounding the US leader has shifted toward a rhetoric of “respect” and posters of the US leader have been posted prominently in public places, supplanting posters with anti-imperialist slogans.

Granma, the organ of the Cuban Communist Party’s Central Committee, published an “official” biography of Obama, which would be more accurately characterized as a hagiography. Displaying an obvious reverence towards the American mythology of middle-class perseverance and success, and ignoring all the political connections which were employed to vault Obama into all the most important positions he has occupied, it starts blandly with: “His story is an American story—the values of the heartland of America, an education within a middle-class family, dedication to study and work to get ahead, and the conviction that a life so blessed should be lived to serve others.”

After listing a highlight reel of Obama’s accomplishments prior to his election as president, it then diplomatically fails to list any of the criminal activities he has undertaken since, such as the drone assassinations, mass spying, and the continuation and spread of wars in the Middle East.