Well-informed and established sources at Iraqi Prime minister Adel Abdel Mahdi’s office in Baghdad believe “the US is unwilling to listen to reason, to the Iraqi government or the parliament. It has the intention of bringing war upon itself and transforming Iraq into a battlefield, by refusing to respect the law and withdraw its forces. The US will be faced with strong and legitimate popular armed resistance, even if some Iraqis (in Kurdistan) will break the law and will accept the US presence in their region, though without a heavy price.”

Caretaker Iraqi Prime Minister Adil Abdel Mahdi suggested to the parliament to agree on a new law asking the US to leave the country. The parliament listened to Mr. Abdel Mahdi and agreed on a new law terminating the contract between Iraq and the US forces and asked the government to implement it. Mr. Abdel Mahdi, in a phone conversation with US Secretary Mike Pompeo, demanded the presence of a delegation to organize the total withdrawal of all US forces from the country. The answer did not have to wait for long: “The US shall not withdraw from Iraq but respects its sovereignty and decisions,” said Secretary Pompeo. The US official failed to explain how Washington can reject the Iraqi sovereign decision asking for the withdrawal of the US troops and yet respect it at the same time.

President Donald Trump took a harsh position asking the Iraqis to pay billions of dollars for the development of the Iraqi bases his forces are hosted in. Otherwise, he threatened to “charge the Iraqi with sanctions like they’ve never seen before” and “it’s Central Bank account held at the Federal Reserve Bank of New York with $35 billion could be shut down”.

US Ambassador to Iraq Mathew Tueller delivered to Iraqi officials – including PM Abdel Mahdi, who has asked for the US forces removal of Iraq — a copy of all the possible US sanctions Iraq could from if the government insists on the total withdrawal of all US forces. This has triggered an immediate reaction from Iraqi groups willing to fight the US forces once declared an occupation force by Iraq.

Iraqi groups who fought against al-Qaeda and ISIS in Syria and Iraq visited the newly appointed Iranian General head of the IRGC-Quds brigade Ismail Qaani who replaced Sardar Qassem Soleimani. They asked for military and financial support to fight the new “occupation forces”. The Iranian General promised to assist in implementing the parliament, government and people’s decision to fight the US occupation forces. Qaani is expected to visit Iraq, where over 100 Iranian advisors work in Baghdad security and command Control Base along with Syrian and Russian counterparts to fight ISIS. 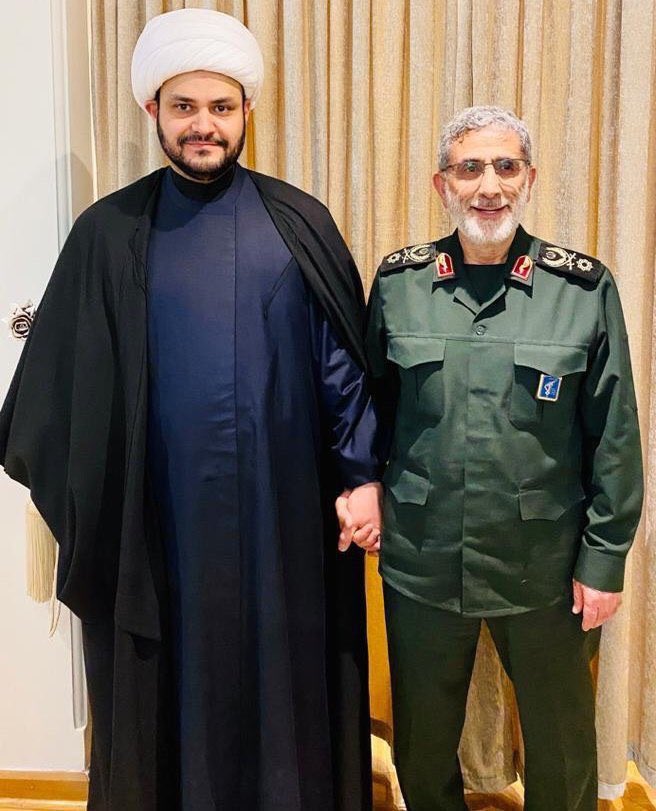 Trump’s decision to take control of Iraq’s oil revenue account at the US Federal Reserve Bank of New York could create a devaluation of the local currency and a crash in the financial system. There is also an implicit threat in Trump’s words, to confiscate Iraq’s national gold reserves, held at the New York Fed.

Clearly, the US administration could not care less about the stability of Iraq and its consequences for the nearby European continent, which could suffer the most from Iraqi migration and increased instability in the Middle East.

Secretary Pompeo wrongly claimed the Iraqi parliament’s decision is non-binding. What grounds would a US official have, to consider an Iraqi political decision void?

When the US assassinated Iraqi commander Abu Mahdi al-Muhandes, Iranian commander Qassem Soleimani and other officers in their company, the Iraqi Prime Minister asked for the revocation of the US-Iraq agreement signed in 2014 that regulated the US forces’ presence in Iraq.

The original agreement was terminated in 2011 when all US forces pulled out of Iraq. In 2014, the deal was re-activated by the government to join forces in the fight against the “Islamic State” (ISIS).

In its Preamble, the agreement states that the US will support Iraq against “threats to its sovereignty and territorial integrity and against its democratic, federal and constitutional system.”

The US is violating the agreement by using its land and airspace – as stated by Prime Minister Abdel Mahdi – without asking Baghdad’s permission. The US forces are allowing Israel to assassinate Iraqi commanders and attack Iraqi warehouses – as the US ambassador to Iraq informed Mr. Abdel Mahdi. By killing Iraqi and Iranian commanders at Baghdad’s airport, US forces are causing the termination of the agreement by non-respect, in accordance with its articles 2 and 3.

The US government is further violating Iraq’s sovereignty by ignoring the Iraqi parliament’s resolution and refusing to schedule the withdrawal of all forces. Not only this: President Trump has openly threatened to break the Iraqi economy by disregarding the UN and international law, thereby imposing his “law of the jungle.”

At the Iraqi parliament, 173 MPs out of 328 voted for the withdrawal of the US forces. The suggestion of the caretaker Prime Minister is not binding. The government can only suggest and offer its opinion. The legislative decision goes back to the parliament, and its decision is a binding law applied to the present and future government (unless a new parliament revokes decisions of the previous one).

Even if all Kurds and most Sunni MPs (3 were present) were absent, the Constitution doesn’t rely on the presence of religions or ethnicities, the vote and the source of law are based on the majority (half plus one). This is how the Speaker, the President and the Prime Minister are elected, always by the most significant political coalition group. 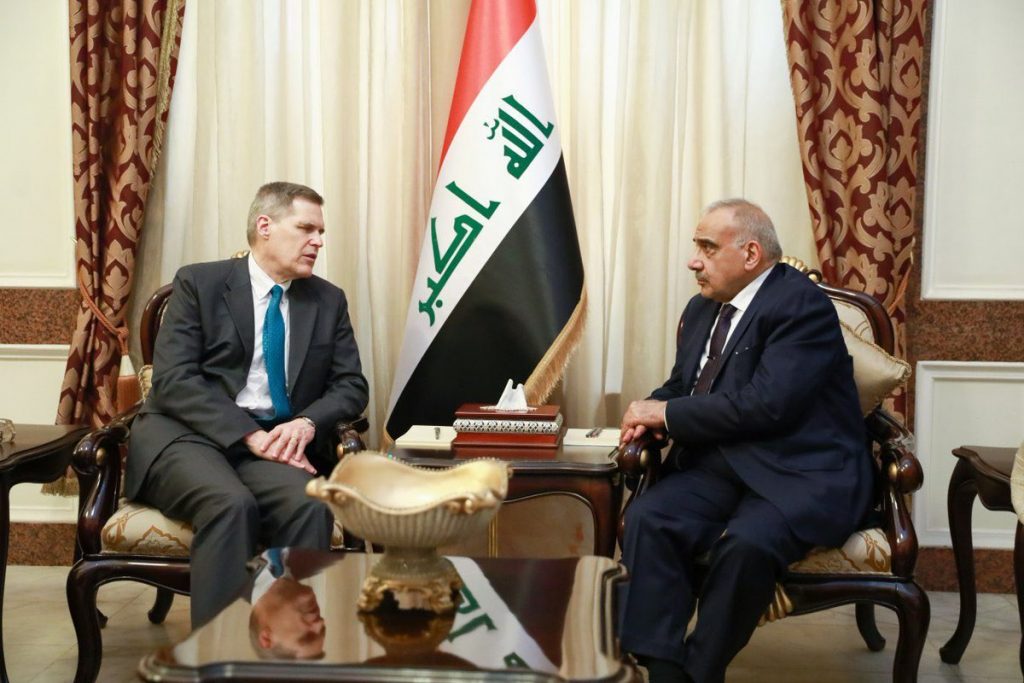 The parliament will meet again to read the resolution for the second time, ask all MPs to sign the document, and agree upon a deadline for the US withdrawal. The agreement doesn’t require the signature of the President in this case, as declared by the Speaker Mohamad al-Halbousi, but requires Halbousi’s presence, which is the case.

President Trump asked Iraq to pay him “billions of dollars” for the expansion of military bases to suit the US forces. Again, the US deliberately ignored article 5 of the agreement that all “Iraq owns all buildings, non-relocated structures… including those that are used, constructed, altered or improved by the US. Upon their withdrawal, the US shall return to the government of Iraq all the facilities free of any debts and financial burdens…The US shall bear the costs of construction, alterations, or improvements in the agreed facilities and areas provided for its exclusive use.”

Article 24 also states that the “US recognises the sovereign right of the government of Iraq to request the departure of the US forces from Iraq any time.” Trump disregards this treaty obligation, and instead says: “Iraqi will pay if they want us out.” It shows the US administration’s intention to remain in oil-rich Iraq for a long time.

Thus, following the assassination of the generals, there is little doubt 2020 will be a hot year in Iraq and hard on US forces if their President continues to ignore Iraq’s sovereignty and constitutional decisions. The US forces will now be considered a force of occupation, legitimizing armed resistance against it. Iraq is back to 2003 when George W. Bush declared the country occupied. This was when the resistance took off. Trump’s last year of his first term will not likely bring any stability to the Middle East, and will certainly be very dangerous for US service personnel deployed in the region.

Proofread by:   C.G.B and Maurice Brasher