The US Isn’t Serious About Leaving Syria At All

Three days after the US President announced that US forces would be withdrawing from Syria and allowing the Turkish military to clear a zone along its border of Kurdish militants, someone thought to ask Australia’s PM Scott Morrison about his government’s position on the US action. The Commander in Chief’s direction to his military met with howls of protest from almost every quarter in the West, even before there was the slightest sign Trump’s order had been obeyed on the ground, but for Morrison it was US business alone.

“The US has done the lion’s share of the heavy lifting in the Middle East” he said, without explaining what that might mean, or on whose behalf the US had lifted whatever it was. Perhaps it’s worth examining the sort of disturbed thinking that lies behind such an idea, for an insight into how future challenges might pan out. For those who dismissed concerns about Australia joining up to the US Persian Gulf blockade, warnings that these challenges could be severe and imminent should now be heeded.

At a press conference announcing a new US deployment of 1800 troops to Saudi Arabia, Brian Hook, the US special representative to Iran presented this clear escalation in tensions as a response to Iran’s alleged destabilizing activities in the region and “support for terrorism”, including the drone strikes on Saudi Aramco facilities. The US maintains – quite falsely – that the drones and alleged cruise missiles came from the North and somehow evaded detection and destruction by the whole battery of defenses already in place against Iranian missile attack.

What may have seemed a relatively inconsequential issue, given the Yemeni Houthis already claimed responsibility for the surprise attack and had ample motivation for it, now assumes a much more serious dimension; Hook claims it was “an act of war” by Iran, and a significant step in what he calls “the accumulating risk of a regional war”.

It is hard to doubt Hook’s assessment of this risk, because it is entirely a result of US policy and US provocations – including particularly the militarization of the Persian Gulf, and the vindictive economic blockade which Iran has rightly called “economic terrorism” and a declaration of war. Listening to Brian Hook’s description of the US progress in destroying Iran’s economy at the start of his presser makes one wonder how the cultivated and civil Iranians could possibly deal with such a man.

In fact the whole context of the press conference made it quite farcical – an Iranian oil tanker passing through the Red Sea had just been hit by two missiles, of unknown origin. Unknown that is excepting that neither the Houthis nor the Iranians could have been responsible. In a report on the ABC it was noted that this attack “followed attacks on tankers in May and June” – which is a little disingenuous, given that those attacks were blamed on Iran and used as the pretext for “Operation Sentinel” – the “International  Maritime Security Mission” that Australia has signed up to.

But here’s the twist; whoever fired the missiles at the Japanese tanker near the Straits of Hormuz in June, while Shinzo Abe was meeting Ayatollah Khamenei in Tehran, was also the most likely culprit in the latest attack on Iran’s oil exports. Iran has said that the missiles were not fired from the Saudi coast, so there are few contenders – we all know who these are so it’s hardly necessary to name them, but let’s do so – the US and Israel, not excluding possible UK or Australian participation.

As Morrison pointed out, the US has been doing most of the “heavy lifting” in the Middle Eastern region, for the last forty years in fact, since the Iranians threw out the Shah and ended the control of the US, UK and Israel exerted over the region. That heavy lifting, which now comes in the form of two Fighter jet squadrons, Patriot and THAAD missile defense systems for the already overburdened Saudi military, has been responsible for the “lion’s share” of deaths and devastation across the region.

Few would dispute the US’ responsibility for the devastation of Iraq, including the deaths of half a million children from sanctions so famously described and acknowledged by Madeleine Albright as “worth it” – for the subjugation of Iraq and seizure of its oil assets. Neither should they dispute the US role in sponsoring and fuelling the eight years of war on Syria, candidly admitted to by Joe Biden and understood by all its Syrian victims – now evidently including the Syrian Kurds.

The problem we now face, if we seriously want to avoid a catastrophic regional war that our dangerous ally seems intent on provoking, is almost insurmountable – as great as the problem of preventing disastrous climate change, though for quite different reasons. Unlike the latter, where a groundswell of public protest and activism has lately become feverish and dangerously mainstream, raising the alarm on the illegality and immorality of the predicted war on Iran and her allies is a hopeless quest, and just became even more so.

This was brought home to me last month, when a peace rally in Melbourne organized by IPAN – the Independent and Peaceful Australia Network – opposing war on Iran, attracted a mere handful of people. This was despite its being held on the very day Morrison was sitting beside Trump at the White House as he talked about “nuking” Iran. By contrast, the climate strike rally the previous day filled Melbourne’s streets, and was supported by my fellow climate activists. But the slogan “No Climate for War!” just didn’t cut it with them.

The problems in shifting the public mind on our involvement in foreign wars are manifold, and the result of years of disinformation and fabrication from our own government and its influential think-tanks. The manufacture of false narratives by the “Imperial alliance” led by the US and UK has achieved unimaginable success in gaining public support – or lack of resistance – for the most egregious offenses against international laws and human rights in foreign states in which we have no legitimate business. There is no better illustration of this than current developments in Northern Syria.

Despite all the abuse and ridicule of the Syrian Arab Republic since the war began in March 2011, Syria has maintained its rights as a sovereign state recognized by the UN, with its legitimate representatives to the Security Council. At no time has Syria accepted the presence of foreign states or their representatives inside its boundaries without permission, nor considered any plans for ethnic division or Balkanisation of its territory without the consent of a majority of its citizens. Had those citizens been consulted last week when President Trump announced a US pull-out from Syria, some fifteen million of them would surely have said, with one voice – “yes Leave Now!”

They might have added – “and take all your mercenaries and jihadist accomplices with you!” But of course the US isn’t serious about leaving Syria at all, even if Donald Trump really intended it, and it has nothing to do with “preventing Islamic State from returning”. Neither had it much to do with protecting the Kurds, beyond their use as a mercenary force to protect the most valuable asset in Eastern Syria – Oil. 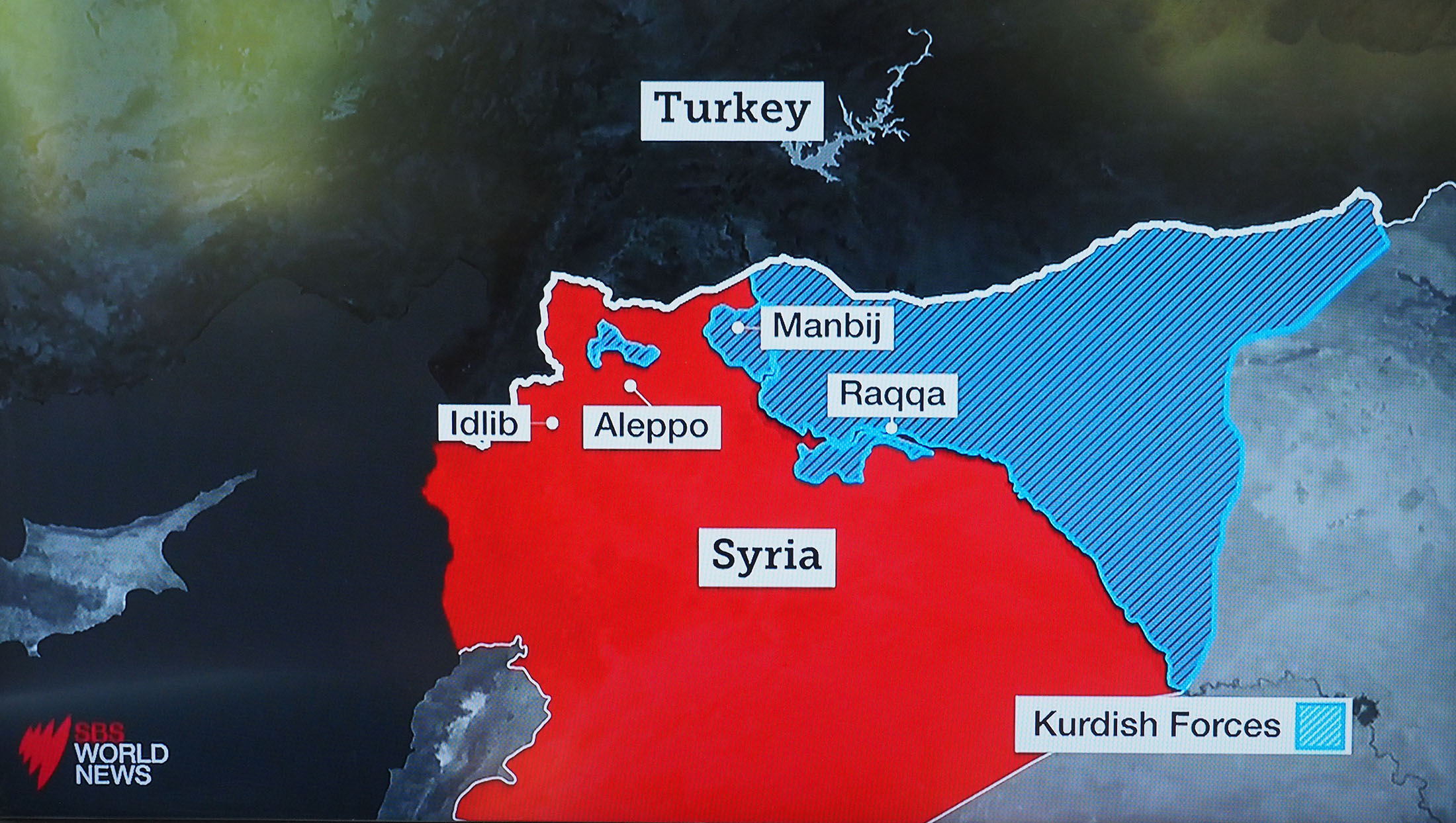 Thanks to those years of misinformation and missing information, most Australians would have no idea that the US occupation of North-Eastern Syria is all about stealing Syria’s oil resources, initially in cooperation with Islamic State but then passing under the control of the Kurdish-dominated SDF. Multiple attempts by Russian and Syrian militaries to win back the oil fields east of the Euphrates, either by force or negotiation, have failed, while the oil is pumped and trucked into Iraq or via Turkey to be sold into European markets. Only for this reason is Syria forced to import Iranian oil – running the gauntlet of piracy and sabotage and sanctions threats on the way. (It’s worth noting that I wrote this article for an Australian website in an attempt to enlighten a few Australians, and foster resistance to the Australian government’s “foreign policy” and collaboration with the belligerents; such dissident opinion is sadly not welcome here.)

The truth of US intentions – to remain in Eastern Syria until they are driven out militarily – has now been emphasized by US Defence secretary Mark Esper. At a press conference where he confirmed the US intention to withdraw 1000 troops from Syria, when asked whether this meant from all of Syria he simply repeated what he had said – “from Northern Syria”. As explained here by Syrian American journalist Stephen Sahiounie, this withdrawal has begun in the North West town of Manbij following negotiations between Russian and US militaries, where residents are already celebrating their liberation from US-SDF occupation, as well as protection from a Turkish advance (though this news is disputed by some reports). More significantly it appears that the Syrian Arab Army has now taken control of the key city of Hasakah, the centre of US operations in the North East.

At this moment we can only speculate on the outcome of Turkey’s move into Syria, and what it may mean for the US’ long term plans in the region. If we genuinely seek peace and a just solution for the citizens of Syria and Iraq then we should work to ensure that those plans are stymied. That must include immediate cancellation of “Operation Sentinel” and Australia’s participation in it. But we might also hope that newfound cooperation between Syrian Kurdish communities and the Syrian Government may see a reassessment and new understanding of Bashar al Assad’s legitimacy amongst the chronically misinformed Australian (and read Western) public.