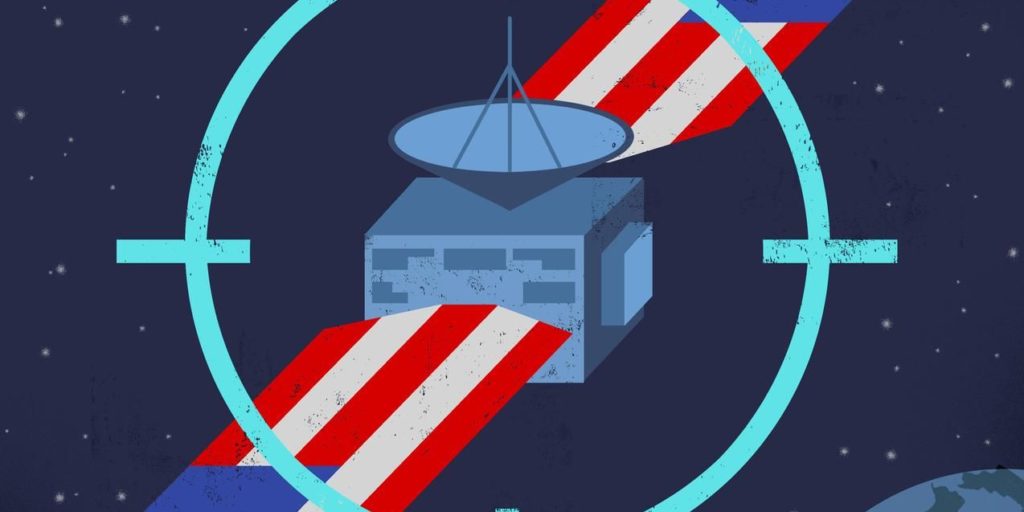 The US Militarization Of Outerspace

Another day, another opportunity for our perpetually “behind” and “vulnerable” military/industrial/media complex to assert the need for yet another military upgrade–this time in outer space!

The Wall Street Journal (5/10/19) published an excerpt from an upcoming book by CNN’s chief national security correspondent, Jim Sciutto, which claims that despite a “Star Wars–like space service” being an “easy comic target,” “US commanders” are “deadly serious” about confronting “new threats in space.” These “commanders” were mostly anonymous—but such sources are often involved in a profitable revolving door relationship with military contractors.

CNN (2/11/19) warned us of Russia and China’s “new” anti-satellite laser capacities, with breathless statements by government officials claiming that the two countries are “surpassing us” in space capabilities. NBC (2/11/19) claimed that both countries were “preparing to use space as a battlefield.” The Daily Beast (4/10/19) cautioned that although the US currently operates around 850 public and private satellites, compared with China’s 280 and Russia’s 150, Washington’s plans to launch 1,300 additional satellites to help the US “survive a sneak attack by China and Russia” might still be insufficient.

While these alarmist reports about an endangered and inadequate military lagging behind its ambitious and innovative “adversaries” are nothing new (FAIR.org, 12/20/18), Sciutto’s excerpt is exceptional in its credulity towards official sources, and in how badly it misleads readers regarding the militarization of space and the “threats” posed by Russia and China.

Going over several apocalyptic scenarios—“the internet would stop altogether,” financial markets would be “paralyzed” and the US might lose its indispensable capacity to “target anyplace on the planet, anytime, anywhere, any weather”—Sciutto warned  that one thing is clear: “War is coming to space, and the US must prepare for it.”

Sciutto relied on mostly anonymous government and military official sources for his claims of the US “losing ground” and potentially suffering an “outright military defeat at the hands of our foes”—unless, of course, the US commits to a “more robust Space Force.”

The Journal’s previous reporting (6/18/18) featured official sources claiming that the US must maintain its “competitive advantage,” since space is now a “warfighting domain,” and statements by President Donald Trump on the US’s commitment to space hegemony:

When it comes to defending America, it is not enough to merely have an American presence in space. We must have American dominance in space.

This is not just Trumpian bluster, but US military doctrine going back decades—as outlined by the US Space Command’s 1997 Vision for 2020, which outlines the pursuit of “full spectrum dominance” to maintain overwhelming military superiority in land, air, sea and space.

Although Sciutto included the question of whether space-faring countries will negotiate a “peace treaty for space” in his list of “pressing policy questions about how to fight in space,” he doesn’t mention that the two countries he’s fearmongering about, Russia and China, have been at the forefront of proposing arms control treaties in outer space for years (Newsweek, 3/20/19).

One of the peace agreements the US refuses to negotiate, due to its missile defense advantages and edge in potential space weaponry, is the Prevention of an Arms Race in Outer Space (PAROS) treaty, which has had near unanimous support from the international community—including Russia and China—for over 30 years. The Bulletin of the Atomic Scientists (12/11/18) reported that the US rejected all four resolutions of the UN General Assembly’s First Committee meeting in 2018 dealing with disarmament and prevention of the weaponization of space.

Sciutto also never explains why Russia and China might want to develop the “kidnapper” and “kamikaze” satellites he terrifies his readers with. Despite the misnomer, it’s common knowledge among nuclear strategists that “missile defense systems” are actually offensive weapons, designed to secure a nuclear first-strike advantage by neutralizing retaliatory strikes, and serve as a “Trojan Horse” for the weaponization of space, because they depend on satellites to track missiles (Roll Call, 11/21/16). That might explain why Russia and China are seeking to upgrade their military space capabilities as the US deploys missile defense systems near their borders (Slate, 5/13/16; Washington Post, 3/7/17).

Noam Chomsky once explained that American news coverage operates on the premise that the US “owns the world,” but it’s clear that outer space belongs to the US as well, since corporate media frame any nation failing to treat space as Washington’s private property as enemy trespassers (RT, 2/13/19). It’s not enough to be No. 1 in the space race, because every other nation could “gain ground” on the US, driving a vicious circle of never-ending military buildups. As the global space economy is expected to multiply several times over the next few decades—with lucrative deals for military contractors—we can expect more alarmist reports from corporate media about the “threats” posed by countries seeking a peace treaty with the US in outer space.