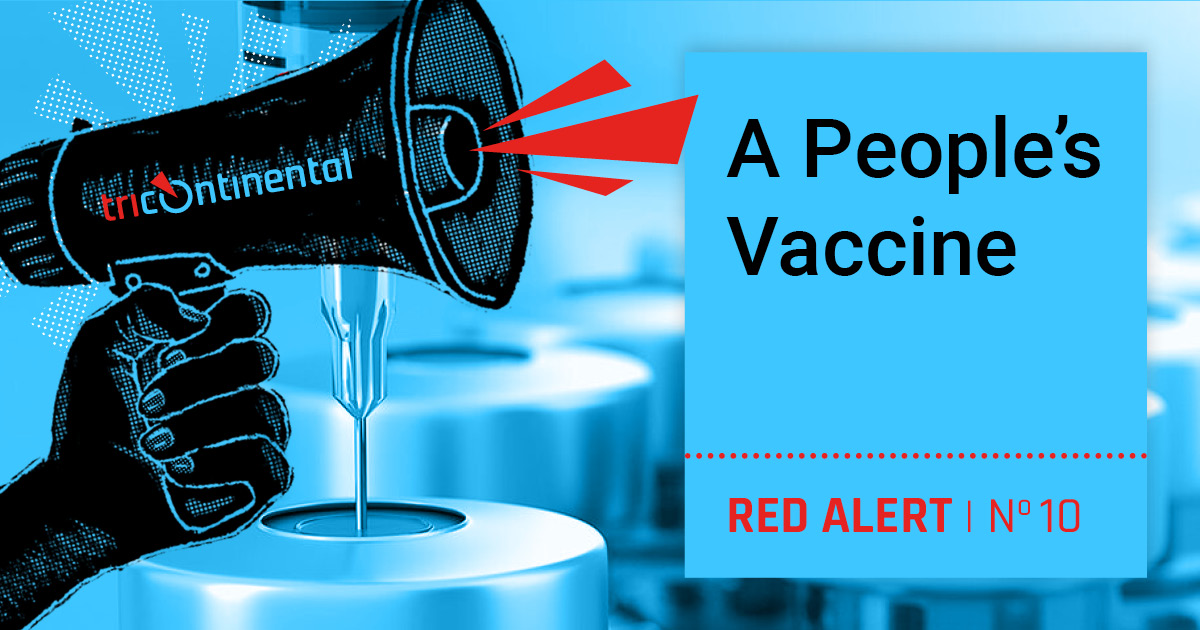 The Vaccine Must Be A Common Good For Humanity

Nearly three million people have reportedly been killed by the novel coronavirus (SAR-CoV-2) and upwards of 128 million people have been infected by the virus, many with long-lasting health repercussions. Thus far, roughly 1.5% of the world’s population of 7.7 billion have been vaccinated, but 80% of them are from only ten countries. In February, Tricontinental: Institute for Social Research warned about the ‘medical apartheid’ that has shaped the vaccine roll-out.

Since 1950, the World Health Organisation (WHO) has celebrated Global Health Day on 7 April. Each year, the WHO choses a different theme for the day, with last year’s being ‘Support Nurses and Midwives’. This year, the theme is ‘Building a fairer, healthier world’, which goes to the heart of medical apartheid.

On 1 April, the International Week of Anti-Imperialist Struggle released the ‘International Manifesto for Life,’ which called for ‘free vaccines for all people’. This week’s newsletter is dedicated to our Red Alert no. 10, which – with the guidance of scientists and doctors – looks at the need for a people’s vaccine.

What is a vaccine?

Infectious diseases can cause serious illness and death. Those who survive the infection often develop long-lasting protection from that same disease. About 150 years ago, scientists discovered that infections are caused by microscopic ‘germs’ (what we now call pathogens), which can spread from animals to humans and from person to person. Could a small or weakened portion of these pathogens trigger changes in the body that might protect people from severe infections in the future? This is the principle behind vaccines.

A vaccine, containing microscopic molecules that mimic parts of an infection pathogen, can be injected into the body to activate this pre-emptive protection against the disease. Although one vaccine protects just one individual against just one pathogen, when many vaccines are considered together in organised, large-scale vaccination programmes, they become crucial to community-level interventions.

Not all infections can be prevented by vaccines. Despite huge financial investments, we still do not yet have (and may never have) dependable vaccines for certain infectious diseases – such as HIV-AIDS and malaria – due to these diseases’ biological complexity. It has been possible for COVID-19 vaccines to be rushed into use because – for the most part– they are based on well-understood biological mechanisms in less complex disease situations. Vaccines are an important measure to contain infectious epidemics. However, genetic changes in the infectious microbe can make vaccines ineffective and necessitate development and deployment of new vaccines.

Why aren’t COVID-19 vaccines being provided to all of the world’s 7.7 billion people?

Not long after the emergence of the novel coronavirus (SAR-CoV-2), Chinese authorities sequenced the virus and shared that information on a public website. Scientists from public and private institutions rushed to download the information to better understand the virus and to find a way to both treat its effects on the human body and to create a vaccine to immunise people against the disease. At this stage, no patent was issued on any of the information.

Within months, nine private and public sector firms announced that they had vaccine candidates: Pfizer/BioNTech, Moderna, AstraZeneca, Novavax, Johnson & Johnson, Sanofi/GSK, Sinovac, Sinopharm and Gamaleya. The Sinovac, Sinopharm, and Gamaleya vaccines are produced by the Chinese and Russian public sectors (by mid-March, China and Russia had provided 800 million doses to 41 countries). The others are produced by private firms that have received vast amounts of public funding. Moderna, for instance, received $2.48 billion from the US government, while Pfizer received $548 million from the European Union and the German government. These firms put the public funding towards making a vaccine and then extracted enormous profits from their sales and further secured these profits through patents. This is one example of pandemic profiteering.

Information about the numbers of vaccines sold and transported to different parts of the world changes rapidly. Nonetheless, it is now acknowledged that many poorer nations will not have vaccines for their citizens before 2023, while the Global North has secured more vaccines than they require – enough to vaccinate their populations three times over. Canada, for instance, has enough vaccines to vaccinate its citizens five times. The Global North, with less than 14% of the world’s population, has secured more than half the total anticipated vaccines. This is known as vaccine hoarding or vaccine nationalism.

The governments of India and South Africa approached the World Trade Organisation (WTO) in October 2020 to ask for a temporary waiver of patent obligations under the Agreement on Trade-Related Aspects of Intellectual Property Rights (TRIPS). If the WTO had agreed to this waiver, these countries could have produced generic versions of the vaccine to distribute at low cost for a mass vaccination drive. However, the Global North led the opposition to this proposal, arguing that such a waiver – even in the midst of a pandemic – would stifle research and innovation (despite the fact that the vaccines were developed largely with public money). The Global North successfully blocked the application for the waiver in the WTO.

In April 2020, the World Health Organisation (WHO), with other partners, set up the COVID-19 Vaccines Global Access or COVAX. The point of COVAX is to ensure equitable access to the vaccines. The project is led by UNICEF; GAVI, The Vaccine Alliance; the Coalition for Epidemic Preparedness Innovations (CEPI); and the WHO. Despite the fact that the majority of the world’s countries signed on to the alliance, vaccines are not being distributed to the Global South in sufficient numbers. A study from December 2020 found that, during 2021, nearly seventy countries in the Global South will only be able to vaccinate one in ten people.

Rather than supporting the India-South Africa application for the waiver, COVAX backed a proposal for patent pooling called Covid-19 Technology Access Pool (C-Tap). This process would involve two or more patent holders agreeing to license their patents to one another or to any third party. COVAX has not received any contributions to date from pharmaceutical companies.

In May 2020, the WHO proposed to establish an international COVID-19 vaccine solidarity trial in which the WHO would coordinate trial sites in multiple countries. This would have led emerging vaccine candidates to enter clinical trials rapidly and transparently; they would have been tested in multiple populations and comparisons could have been made for specific strengths and limitations. Both Big Pharma and the countries of the North suffocated this proposal.

What would it take to produce basic vaccines for the world’s 7.7 billion people?

The production of vaccines varies based on the actual technological platform required for creating the particular infection mimicry to be used for the specific vaccine. For COVID-19 vaccines, there are many successful platforms. Two such instances have been the RNA vaccines (in the case of Moderna) and adenovirus vaccines (in the case of AstraZeneca). These technology platforms are robust, meaning that if the know-how (including trade secrets for the vaccine production) and skilled personnel are available and manufacturing lines are scaled-up and efficient, the vaccine could be produced for the people. The word ‘if’ is in italics because these are the most important impediments that stem from the capitalist logic of intellectual property rights and the long-term drive to undermine a public sector that centres the social good.

One intermediate approach to vaccine production attempts the large-scale manufacture of mimic proteins in fermentation tanks (the Novavax vaccine, for example, is manufactured in this way). For this platform, the absorption capacity and personnel with skills are more widespread. The quality control and assurance issues are more varied batch-to-batch in these platforms, which is a hurdle for widespread decentralised production.

There is a much simpler way to produce the vaccines: to grow the infectious agent, inactivate it (namely, to make it non-dangerous), and inject that into the body (such as Covaxin, the vaccine developed by Bharat in India). But there are problems here since it is not always easy to inactivate the harmful pathogen whilst still keeping it whole to develop the antibodies.

What would it take to administer vaccines for the 7.7 billion?

To widely administer the COVID-19 vaccines across the globe, we need to consider three elements:

It is worthwhile to read and circulate the Alma-Ata Declaration (1978) on primary health care and the People’s Charter for Health (2000), both strong statements for a robust, humane approach to health care. The latter asks for a rejection of ‘patents on life’, which includes patents on vaccines. There is no alternative to a people’s vaccine, no alternative to life over profit.