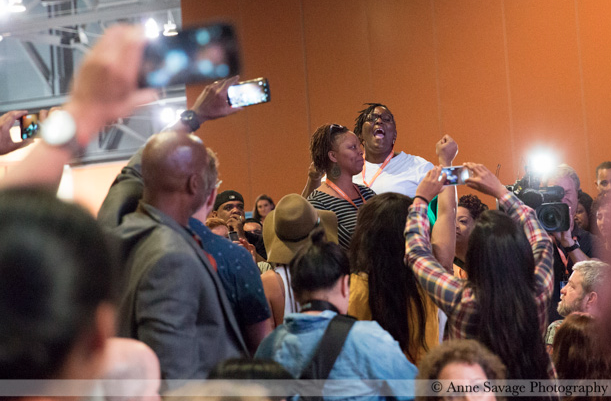 The Value Of Protest

Note: The author’s expression of support for Bernie Sanders is his personal viewpoint not the view of Popular Resistance.We do not take a position on electoral matters nor are we as optimistic about the possibility of Sanders winning the Democratic primary. We see the primary as a rigged system designed to nominate a corporate Democrat. We cannot recall an insurgent challenger to the Wall Street domination of the Democratic Party ever being successful in their primary system. We reprinted DeChritopher’s blog because we appreciated his self reflection on race issues as well as his analysis of the effectiveness of the #BlackLivesMatter protest at the Netroots Nation presidential townall.

As a strong supporter of Bernie Sanders, my first reaction to hearing about yesterday’s Black Lives Matter protest at Netroots Nation was disappointment.  This looks bad, I thought.  Bad for Bernie, who is the only presidential candidate with any chance of challenging structural injustice.  And bad for Black Lives Matter, who could easily be interpreted as shutting down progressive discussions about immigration and economic inequality to make people focus on their priorities.  I’ve had my share of mistakes during protests, as have all the activists I respect most, so I certainly had some sympathy.  But I thought their protest was just that: a mistake.

Then I watched the video of Sanders responding to the protest, or should I say, failing to respond and instead just speaking over and past them.  He tried to just continue with his stump speech and seemed annoyed with the disruption.  Several times he looked at moderator Jose Antonio Vargas as if he expected Vargas to control these women, once asking, “Are you in charge here?”  The closest he came to discussing policing issues directly was mentioning his success with community policing in Burlington, VT, a city that was pretty much all white and pretty much irrelevant to the discussion of racist policing.

As black women, those activists are people who have always been systematically locked out of the public discourse, and they were making their voices heard even if it ruffled some feathers.  In theory, Bernie’s campaign platform is all about the way ordinary citizens have been locked out of the political discourse and the need to make those voices heard.  But when the very thing he says he is looking for appeared right in front of him, he didn’t see it.  As my dad says, if it was a snake it would have bit him.  And this time, it did.

Others have written thoughtful reflections on what this protest meant for challenging white privilege.  The value for me personally was in what the protest exposed in Bernie Sanders, and by extension, myself.  When asked directly about white supremacy and police violence against people of color, Sanders responded by talking about fixing the economic system and providing more jobs.  He didn’t explicitly connect unemployment with getting killed by police, but the implication was that if a black person doesn’t have a job, we can pretty well expect that he’ll get gunned down by a cop.  Bernie was focused on Big Ideas, and derailing that to talk about one woman, or even one certain segment of the population, seemed like a frustrating distraction.

The thing is, this specific protest was in honor of Sandra Bland, who had a job when she was arrested for not using a turn signal and died in custody.  In fact, she moved to Texas for her job, but her pursuit of a career didn’t save her.  On the other hand, the 31% of unemployed white high school graduates mentioned by Sanders don’t get killed by police at anywhere near the rate of the 51% of unemployed black high school graduates.  In retrospect, Bernie’s response to the BLM disruption looks like an exercise in avoiding the obvious fact that race matters.

Like Sanders, my tendency is to zoom out from the personal and look at things structurally and systemically instead.  When I think about anti-racism, I tend to focus more on changing institutionalized inequality than on challenging individual attitudes.  In the past I’ve worried that the BLM movement’s focus on the names of specific people killed by police might simplify the need to dismantle complex systems into a perspective that considers justice done when specific killer cops are prosecuted.  The most disappointing part about watching Sanders yesterday was the degree to which I recognized myself in him.

But the BLM protestors chanted “Say her name!” in reference to Sandra Bland because Bland’s particularity demonstrates that increased economic opportunities alone will not solve the problem.  We also have to actually confront racism.  Bernie never did say her name, and his failure to depart from his script to validate the particularity of Bland’s life is inseparable from his failure to really see the particular living black women standing right in front of him as the embodiment of everything his campaign strives to be.

I think Bernie Sanders can actually win the presidency, but to do so he needs the energy and grassroots organizing of the Black Lives Matter movement on his side.  It’s early enough in the campaign that with some serious reflection and humility, he can learn from this and earn the trust of the movement.  And importantly, when he is president, this learning experience will make him far better at dealing with the reality of racism and other kinds of oppression that plague our country.

The BLM protest revealed the deficit not only in Bernie’s campaign, but in the approach of folks like myself who would rather avoid the particular lived experience of individuals who suffer from oppression.  An exclusive wide-angle view on structures is just as much of an oversimplification as an exclusive narrow focus on individuals.  Like any oversimplification, it compromises our ability to find adequate solutions to real world problems.  Avoiding the particular also blinds us to our real allies when they are right in front of us.

Some might say that people like me could have been taught these lessons without disrupting a critical dialogue with Jose Antonio Vargas and possibly damaging Sanders’ campaign.  Maybe so.  But that would have required people like me and Bernie Sanders to really see and listen to these people, which was exactly the problem.  Part of the point is that the lived experience of black women is excluded from the public discourse.  It’s never going to be their turn to have their voices heard, so they have to create the opportunities to make their voices heard.  Protests are always criticized as being at the wrong time because those who need to protest are never the people writing the agenda.  That’s the value of protest.

Bernie Sanders rightly recognizes that all of us are increasingly excluded from the political discourse that shapes our country.  If his campaign is to realize it’s revolutionary potential, we would do all well to follow the lead of the women of Black Lives Matter who made their voices heard at Netroots Nation.