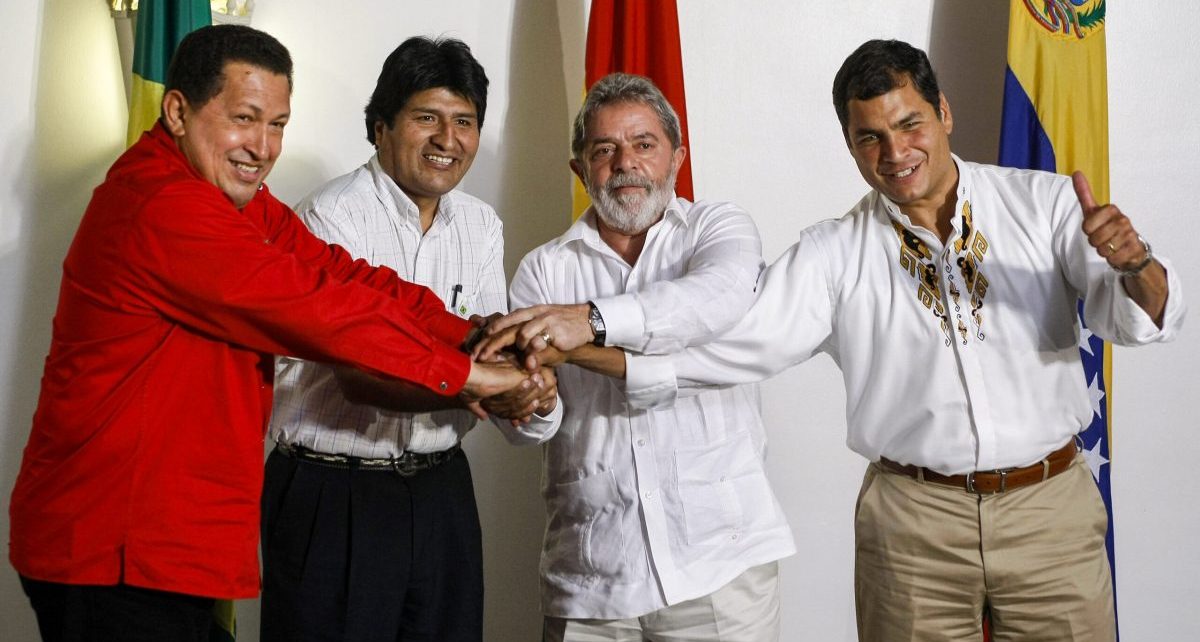 The Volatility Of US Hegemony In Latin America, Part I

NOTE: Read Part II of this series, Cuba, Venezuela, Nicaragua, Haiti, and China and Part III, Challenges Ahead for the Pink Tide.

Latin America and the Caribbean have again began to take on a becoming pink complexion, all the more so with June’s historic electoral victory in Colombia over the country’s long-dominant US-backed rightwing and a similar reverse in Brazil in October. These electoral rejections of the rightwing followed left victories last year in Peru, Honduras, and Chile. And those, in turn, came after similar routs in Bolivia in 2020, Argentina in 2019, and Mexico in 2018.

This electoral wave, according to Venezuelan President Nicolás Maduro, speaking at the Climate Summit in November, “open[s] a new geopolitical age to Latin America.” This “Pink Tide” challenges US hemispheric hegemony, whose pedigree dates back to the 1823 Monroe Doctrine.

The metaphor of the “Pink Tide” aptly describes the ebb and flow of the ongoing class conflict between the minions of imperialism and the region’s popular forces. Back in 1977, the region was dominated by the “rule of the generals.” The infamous US Operation Condor supported explicit military dictatorships in all of South America, except for Colombia and Venezuela, and in much of Central America.

Then the tide began to turn with the election of Hugo Chávez in Venezuela in 1998. By 2008, almost the entire region was in the pink with the notable exceptions of Colombia, Mexico, and a few others. A decade later, a conservative backlash left Uruguay, Ecuador, Venezuela, Bolivia, Nicaragua, Cuba, and a lonely handful of other states on the progressive side. But that was to change by midyear 2018.

The first blush of pink to the current wave dates back to July 1, 2018, with Andrés Manuel López Obrador’s landslide victory in Mexico. Many believe his two previous runs at the presidency were stolen from him. Affectionately known by the acronym AMLO, his broad coalition under the newly formed MORENA party swept national, state, and municipal offices and ended 36 years of neoliberal rule.

AMLO has made important foreign policy initiatives independent, in fact defiant, of the US. He conspicuously invited Venezuelan President Maduro as a guest of honor to a major Mexican holiday celebration. When Biden called a “democracy summit” for the hemisphere last June but did not invite Cuba, Venezuela, and Nicaragua, AMLO boldly led a boycott, which largely sabotaged the affair. And AMLO has been a strong proponent of regional integration promoting CELAC and other multi-national institutions.

A year after AMLO’s ascendency, the rightist Mauricio Macri was replaced by the left Peronist Alberto Fernández on October 27, 2019. The flip from right to left was a repudiation of Macri’s subservience to the IMF and austerity economic policies, which had generated mass opposition.

Two weeks after the election in Argentina, the left suffered a major body blow on November 10, 2019, when a coup overthrew leftist President Evo Morales in Bolivia. The coup was backed by the US with the complicity of the Organization of American States (OAS) under the leadership of Luis Almagro, a sycophant to the Yankees.

Evo, as he is popularly called, was the first indigenous president in the majority indigenous country. He barely escaped the coup violence when a plane supplied by AMLO whisked him to safety in Mexico.

Evo’s vindication came a year later on October 18, 2020, when his fellow Movement to Socialism (MAS) Party member Luis Arce won back the presidency by a landslide. Evo then returned from exile and has since played an international role as a spokesperson on climate change, regional integration, indigenous rights, and other left issues.

Then seven months later, a person from a Marxist-Leninist party took the presidency in Peru on June 6, 2021. When the rural schoolteacher and strike leader Pedro Castillo emerged as one of the two contenders in the first presidential election round, he was virtually unknown. The international press even struggled to find a photo of the future president.

Castillo won the final election round against the hard right Keiko Fujimori. Castillo’s victory spelled the end of the Lima Group, a coalition of anti-Venezuela countries. Strategically, the Pacific rim of South America, which had previously been entirely populated by rightwing US allies, now had a leftist in its midst.

The left trend was further consolidated five months after the success in Peru when the ruling Sandinista Party (FSLN) in Nicaragua swept the national elections on November 7, 2021. A year later on November 6, 2022, the Sandinistas were further affirmed with a sweep of the municipal elections.

Nicaragua had been recovering from a violent unsuccessful coup attempt in 2018 involving the Catholic Church and other rightwing elements. Having failed to achieve regime change by helping to instigate and back the coup, the US has since tightened the economic screws on the third poorest state in the hemisphere ratcheting up unilateral coercive measures.

Despite the illegal US sanctions designed to punish its people, the socialist government has done so much with so little. Nicaragua’s 8.3% economic growth during the pandemic is among the highest in the region and indeed the world.

Nicaragua is the safest in the entire region and among the safest internationally. Education and healthcare are free. With the best roads in Central America, the previously neglected and isolated Caribbean coast is now more fully integrated with the rest of the country. And an unsurpassed 30% of the national territory is in autonomous zones for indigenous and Afro-descendent peoples. Contrary to US propaganda, polls show President Daniel Ortega is popular with his constituents.

Then two weeks after the left electoral affirmation in Nicaragua, the same was repeated in Venezuela. The ruling Socialist Party (PSUV) swept the regional and legislative elections on November 21, 2021.

Although the US and a handful of its most sycophantic allies still recognize the Trump-anointed Juan Guaidó as “interim president” of Venezuela, the vast majority of states accept Nicolás Maduro as the lawful president. The hapless Mr. Guaidó has the highest disapproval ratings among potential opposition candidates for the 2024 presidential election. While polls show that if a snap election were called, Maduro would win.

Meanwhile, Biden, under pressure to ease fuel shortages of its own making, is ever so slightly easing Trump’s draconian sanctions. Chevron is resuming limited operations in Venezuela and some of Venezuela’s $20 billion of “kidnapped” assets in foreign banks are being released for humanitarian projects.

Just a week after the Venezuela election, the sweetest left triumph was achieved. Xiomara Castro became the first woman elected to the presidency in the history of Honduras on December 1, 2021. Her husband, Manuel Zelaya, had been overthrown in a coup on June 28, 2009, that was orchestrated by US President Barak Obama and his Secretary of State Hillary Clinton.

Castro replaced over twelve years of “nacro dictatorship,” a well-deserved opprobrium that is confirmed by the US government itself. Back in 2009, the facts were so clear that even the accomplice Obama had to admit Zelaya was ousted in a “coup,” though he weaseled that wasn’t a “military” coup.

The US then backed a succession of illegitimate presidents, including the most recent past President Juan Orlando Hernández, with generous military, financial, and political support. Even the OAS, which is essentially an arm of the US masquerading as a multi-national body, questioned the validity of his election. Then once Castro won, “JOH” was quickly extradited to the US and thrown into prison for importing vast quantities to cocaine to the US.

Formerly known as the “USS Honduras” for its role as the US surrogate in Central America, the new Castro presidency will be charting a new course for Honduras.

Less than two weeks after the defeat of the right in Honduras, Gabriel Boric won the Chilean presidency on December 19, 2021, campaigning under the slogan “neoliberalism was born in Chile and here it will die.” He replaced the rightist Sebastián Piñera who, incidentally, was the richest person in Chile.

A former student leader turned politician, the 36-year-old Boric came out of the mass anti-neoliberal protests of 2019 and 2021, which mobilized a significant portion of Chile’s population. Boric had beaten the Communist Party candidate in the progressive Apruebo Dignidad coalition primary and went on the defeat José Antonio Kast in the presidential election.

To call Kast a far rightist would be an understatement. Sometimes leftist rhetoric too loosely accuses opponents of being fascists. In the case of Kast and his politically active brothers, however, the term is perfectly apt. Their father came from Germany and was an actual member of the Nazi Party.

What happened next was truly historical. Former leftist guerilla (since moderated toward the center-left) Gustavo Petro and his VP Francia Márquez, an Afro-descendent environmentalist, were the first progressives to ever win in Colombia on June 19th of this year. Their Pacto Histórico coalition had come out of the immense popular protests of 2019 and 2020, which featured indigenous and Afro-descendent participation.

Colombia, formerly known as the “Israel of Latin America,” had long been the leading US regional client state and the largest recipient of US military aid in the hemisphere. This election promises to upset that role and break with the influential rightwing former President Álvaro Uribe and his successors.

Colombia was a huge splash in the region, but what ensued in Brazil was a crashing tidal wave of global proportions.

Luiz Inácio Lula da Silva, known colloquially simply as Lula, was first elected in 2003 and left the presidency in 2010 with soaring popularity ratings. He was succeeded by fellow Workers’ Party member Dilma Rousseff, who was reelected in 2014. Two years later, the right-dominated legislature used “lawfare” to oust her from office.

Lula was then a victim of lawfare himself. Although the most popular would-be presidential candidate, he spent April 2018 to November 2019 in prison. This allowed Jair “Trump of the Tropics” Bolsonaro to assume the presidency. Then in a spectacular comeback, Lula beat Bolsonaro in the next presidential contest on October 31, 2022.

Sea change in Latin America and the Caribbean

The progressive electoral victories decisively tip the regional geopolitical balance to the portside. The rank order by size of the largest regional economies is Brazil, Mexico, Argentina, Colombia, Chile, and Peru – all of which are now on the left side of the ledger. Brazil’s is the eighth largest economy in the world.

Brazil’s inclusion in the BRICS transcontinental alliance foreshadows an emerging international multipolar independence from the west. Originally including Russia, India, China, and South Africa, BRICS+ may expand to include Argentina, Iran, Egypt, Turkey, Saudi Arabia, Indonesia, and others.

Lula, Maduro, and their fellow travelers promise to be a spokespersons for the poor at home, for regional integration (reviving UNASUR and reinforcing MERCOSUR), and internationally for multilateralism (addressing climate change and possibly even helping to broker a peace in Ukraine).

Part II addresses the explicitly socialist countries (Cuba, Venezuela, Nicaragua), the lessons of Haiti, and the emerging role of China.