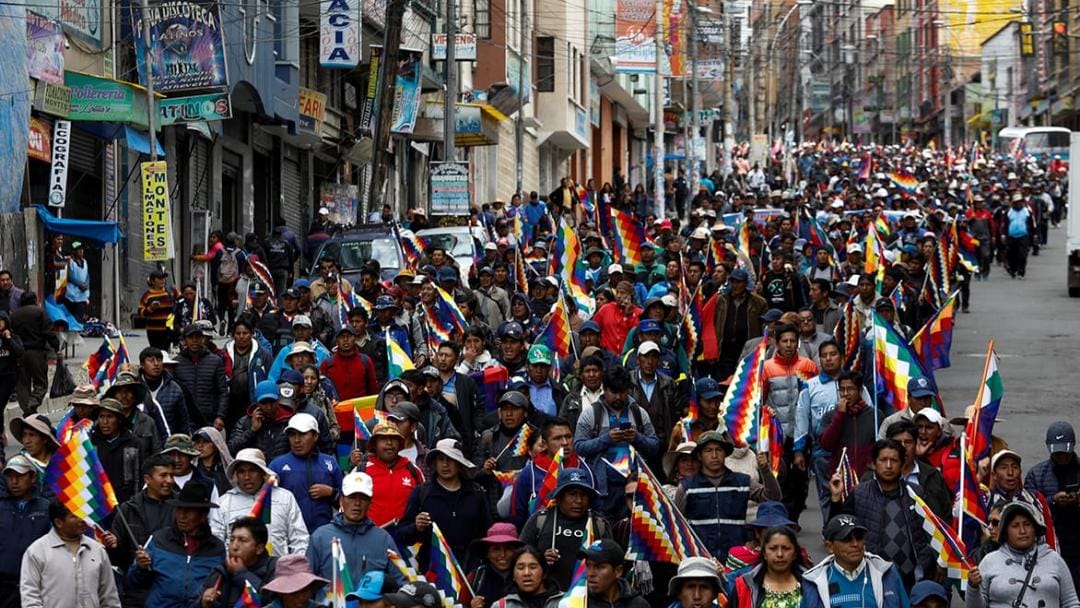 The Volatility Of US Hegemony In Latin America, Part III

NOTE: Read Part I of this series, The Pink Tide Surges, and Part II, Cuba, Venezuela, Nicaragua, Haiti, and China.

Challenges Ahead for the Pink Tide.

A surging Pink Tide has brought left electoral victories in Latin America and the Caribbean protesting the neoliberal model imposed by the US and its collaborators. Neoliberalism has failed to meet the needs of the peoples of the region and is losing its legitimacy as a prototype for development.

However, the countries of the region must of necessity engage in a world financial order dominated by the US, which limits the possibilities of developing their economies successfully.

US and other western central banks – what Nicaraguan President Daniel Ortega calls the “gang of assassins who control the global economy” – maintained low interest rates for much of the last decade which encouraged countries in Latin America and the Caribbean to take out large loans.

Starting around 2021, interest rates were slowly raised. Coincident, the pandemic hit and developing countries were forced to go further into debt to fund Covid measures and cushion the effects of the economic dislocation. In these volatile times, the value of the US dollar has increased on international markets.

For developing nations, this has meant higher interest payments coupled with capital flight to US financial markets in particular. Inflation, fueled by US and allied sanctions on Russia, have disrupted international supply chains, making goods less available and more expensive. In addition, large corporations have extracted excess profits.

Paradoxically those very problems which the left-leaning governments protested about, now have become theirs to solve once in power and at a time of growing economic distress. What Reuters calls the now “orphaned right” in Latin America and the Caribbean may be down but not dead.

Mexico. In Mexico, AMLO is termed-out for the 2024 presidential race. The popular president is currently advocating contentious electoral reforms and expanded welfare. Economic growth is stagnating, and the country continues to be plagued with horrific drug cartel violence. The US is heavily pressuring Mexico to accept GMO crops, energy sector privatization, and measures to prevent immigrants for crossing the border into the “land of the free.”

Argentina. Argentina, a major global supplier of grains and soybeans, is in the third year of a draught. The economy is in shambles with inflation running at nearly 100%, wages stagnant, and an enormous debt incurred by the former rightist administration.

Current vice president and former president (2003-2007) Cristina Fernández de Kirchner (CFK) is the likely left candidate in the upcoming presidential race in October. She may be pitted against former rightwing president Mauricio Macri in what would be a polarizing contest. CFK, who narrowly escaped death when the assassin’s gun jammed, is facing major legal “lawfare” challenges for corruption. Presently, the right is favored to win in the polls.

Bolivia. President Arce faced a month-long coup attempt in the Santa Cruz department of Bolivia. Rightwing forces set up blockades and violently attacked unionists and campesinos, causing considerable damage to the national economy before an agreement was reached. The timing of the next national census was the ostensible point of contention, but the larger and continuing purpose was to destabilize the leftist administration.

Peru. The ever-mercurial Peru has had five presidents in three years. After winning by a razor thin margin, the majority rightwing legislature has so hounded President Castillo that he has literally been unable to govern. They have even blocked his ability to leave the country while he is being investigated on multiple corruption charges. Castillo is hanging in there by his fingernails, having survived two impeachment attempts (and another in progress) and some five cabinet reorganizations.

Honduras. After over 12 years of US-aligned governments in Honduras, President Castro has inherited a strongly entrenched rightist judiciary, military, and police and a weak economy. A state of emergency was imposed at the end of November to address widespread extortion by gangs.

The new president has proceeded cautiously given her constrained options. The legislature passed her repeal of the ZEDE free trade zones. But the US ambassador has interfered in Honduran affairs, opposing the repeal.

Chile. Gabriel Boric has tried to position himself as the “good” non-authoritarian left. On the campaign trail and in office, he criticized Cuba, Venezuela, and Nicaragua, creating disunity among the left-leaning Latin American states. Maduro of Venezuela returned the compliment by labelling him the “cowardly left”; Ortega of Nicaragua called him a White House “lapdog.”

While he may ingratiate himself to the US, President Boric’s popularity ratings have plummeted. He surfed into office on the popular wave for a new constitution to replace the Pinochet-era one, but which went down in a referendum on September 4 with only 38% approval. The economy is in decline and the indigenous Mapuche people are in revolt.

Colombia. The new progressive president has to carefully triangulate with the entrenched right and the colossus of the north. Colombia is the only NATO “global partner” in Latin America, and President Petro has proposed bringing NATO into the Amazon. The congenitally anti-communist, neoliberal Soros foundation is also working closely with the new government.

Despite these constraints, President Petro has reopened relations with Venezuela, reversing Colombia’s previous role as the US surrogate to attack its neighbor. Petro has forged ahead with his Total Peace initiative with the ELN and other armed guerillas, based on the 2016 Peace Agreement. Further, the new administration seeks to negotiate peaceful settlements with right paramilitaries and drug cartels. Meanwhile, illicit cocaine production in Colombia, the world’s largest supplier, is on a record increase.

Petro has also been successful in getting his tax reform enacted to fund his ambitious social programs. Nevertheless, his energy policies present problematic choices between extraction for profit and retrenchment for the environment.

Brazil. Lula beat Bolsonaro by 1.5%. Given the unexpected closeness of the vote and Bolsonaro’s extreme rightwing positions, not to mention his bungling of the Covid crisis and general mismanagement, some analysts considered the election more of a rejection of Bolsonaro than an affirmation of Lula. A significant proportion of the electorate believe, without evidence, that Lula is a corrupt criminal who stole the election.

For over three weeks after Bolsonaro lost, rightwing truckers blocked Brazil’s highways in protest, and evangelicals preyed outside military bases calling for the army to overturn the vote. Bolsonaro neither conceded, nor commented, nor even appeared in public. His Vice President Hamilton Mourão offered the excuse that his chief had a skin disease preventing him from wearing pants!

Finally, Bolsonaro called for annulling over half the votes because of a supposed bug in the electronic system, which would allow him to remain president of Brazil. The independent election authority reaffirmed Lula’s legitimate victory.

Lula’s Workers’ Party lost some of the major cities and states and lacks an effective majority in the national legislature, immediately forcing Lula to moderate his economic agenda after his initial proposal set financial markets plunging. Lula’s running mate and now VP Geraldo Alckmin is a center-right politician, who was included on the ticket to attract that constituency. Lula will take office on January 1.

Prognosis for the Pink Tide

The recent left successes of the Pink Tide have been considerable, but may be transient, subject to the ebb and flow of the electoral arena. Further, this Pink Tide is limited by social democratic politics ideologically tied to accommodating their own bourgeoisies, which inhibits how far social change can be achieved.

Significantly, no new revolutions accompanied this current wave of left electoral victories. Nor are any new revolutions currently on the horizon. The existing socialist countries of Cuba, Venezuela, and Nicaragua have been engaged in defensive struggles against the regime-change campaigns of the US. Their futures are more constrained than they were a decade ago. And their continued survival is by no means guaranteed.

Overarching the hemisphere is the continued presence of US. Globally, Washington has become more aggressive in asserting its dominance and more unified in its imperialist mission now that the Democrats have become the leading party of war.

Meanwhile, recessionary clouds are gathering over the world economy which will impede the left-leaning administrations’ social programs. Unlike the previous Pink Tide of 2008, this one won’t be buoyed by a comparable commodities boom.

Nevertheless, looking into the new year, Venezuelan President Maduro observed at a meeting of the São Palo Forum of regional left parties: “We are facing a favorable wave for the peoples, for the anti-neoliberal model, for the advanced pro-independence model.”