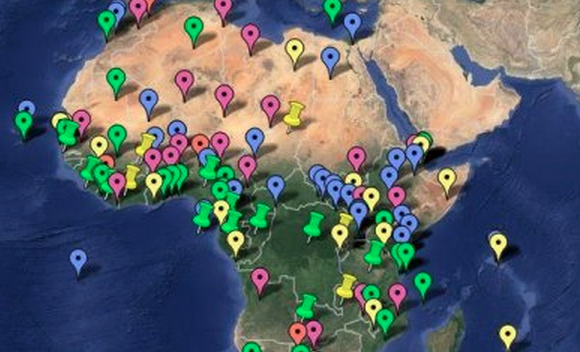 “What the military will say to a reporter and what is said behind closed doors are two very different things — especially when it comes to the U.S. military in Africa.” So writes investigative reporter Nick Turse in his latest book, Tomorrow’s Battlefield: U.S. Proxy Wars and Secret Ops in Africa.

Adapted from a series of articles written for TomDispatch.com from 2012 to late 2014,Tomorrow’s Battlefield methodically follows Turse’s exploration of the U.S. military’s Africa Command, or AFRICOM, a reporting mission that Turse says was continually re-inspired by his subjects’ lack of cooperation. “Basically, it was AFRICOM that made me do it. They were really responsible for this book,” he told HuffPost in a recent interview.

From the outset of his reporting, Turse faced continual resistance and was refused even the most basic information or access in response to his questions. When asked for a simple tally of U.S. installations, military spokespersons repeatedly emphasized to Turse that the command maintains only one permanent “base,” Camp Lemonnier in Djibouti, contradicting documentary evidence of activity and infrastructure on a much larger and rapidly growing scale.

Turse’s investigations eventually showed that the U.S. military has been involved in one way or another — “construction, military exercises, advisory assignments, security cooperation, or training missions” — with more than 90 percent of Africa’s 54 nations. He writes, “While AFRICOM… maintains that the United States has only a ‘small footprint’ on the continent, following those small footprints across the continent can be a breathtaking task.”

Beyond raising the alarm over the growing scale of operations, Turse’s book explains how American actions have almost unfailingly resulted in disastrous unforeseen consequences, a pattern that has done little to deter the U.S. military’s expansionist zeal. In this conversation, Turse outlines some of those consequences, how the military’s efforts to block and undermine his reporting shaped Tomorrow’s Battlefiedand whether the lessons of recent history or competition with China have any chance of altering the United States’ military-first approach to Africa.

___________
What first drew you to the American military presence in Africa and at what point did you realize that you were on to something significant?

A few years back I asked a few of their public affairs people to answer a few simple questions about what the U.S. military was up to on the continent, the basics of the scale and scope of their involvement. I had started seeing indications of increased U.S. operations. Specifically, I saw the building of a sophisticated logistics network and I know that you don’t build a land and sea logistics network to carry supplies all throughout the continent unless you’re planning on sending personnel all over the continent. But when I asked, all they talked about was how little they were doing and how light their footprint was. If they’d told me something that sounded roughly like what I was learning through obscure Pentagon documents and DOD publications, I probably would have shrugged and moved on after writing one article.

In your experience, was that level of resistance standard operating procedure for the military, or was there something about your interactions with AFRICOM that stood out above and beyond the normal?

I’m used to the U.S. military trying to freeze me out, but what pushed me over the edge was that after that first article I wrote, the AFRICOM colonel wrote a full rebuttalto my article, and that to me was very telling and out of the ordinary. They didn’t just send this to me, they also sent it to The Nation Institute which is our funder, so I took this as a real attempt to undermine my credibility and to get who they assumed were my bosses to get me to back off. That really was what signaled to me that there’s an even bigger story than I thought here.

The second article in the book is called “Blowback Central,” talk a little about what you mean by that terminology.

Well you know the term blowback is an old term of CIA tradecraft, and historically it referred to when the U.S. would carry out covert operations somewhere in the world and eventually the fruits of these operations would “blow back” on the U.S. and there would be repercussions but American citizens wouldn’t recognize it as such because they wouldn’t have known what was done in their name with their tax dollars under the radar. When I look at U.S. operations in Africa, I see the same sorts of things going on, the same types of blowback. Because Americans don’t pay a lot of attention to what goes on in Africa and because of the way news stories are constructed they often don’t provide the context to give you a clue as to exactly how these things work out over a period of months or years.

You know just after 9/11, when the U.S. military looked at Africa, they didn’t see much in the way of transnational terror groups. Now, after more than a decade, hundreds and hundreds of millions of dollars and many thousands of training missions later, the continent is awash in terror groups, just the opposite thing that they wanted, and this is the type of thing that I’m talking about, this is the blowback we’re seeing.

Is there an archetypal example of this sort of thing in Africa?

I think a good example of this in Africa is the U.S. intervention in Libya where we joined a coalition to overthrow Gaddafi. Now I don’t think there are a lot of Gaddafi defenders out there, we know that he was in many ways a disaster for his people, but what’s resulted in Libya has been catastrophic and it wasn’t just Libya that was affected. When Gaddafi fell, these nomadic Tuareg fighters who were shock troops for him loaded his weapons stores and traveled back to their home territory of Mali and began to destabilize that country. Because of that, a U.S.-trained officer in Mali — the U.S. had pumped tens if not hundreds of millions of dollars into Mali to make it a regional bulwark against terrorism — overthrew the government there because he felt like he could fight the Tuaregs better. It turned out he wasn’t up to the task and then Islamic militants pushed the Tuaregs and his junta back to the point that the U.S. had to back a French and African force to go into Mali to arrest that. They were able to save Mali from falling to the Islamists, but now it’s a low-level insurgency and those Tuaregs, the weapons that were taken from Gaddafi, have now spread across the continent. There are fighters from Boko Haram, from several Islamist groups, that got those weapons and have trafficked them to neighboring countries. The Libyan intervention has now destabilized the whole Northwest corner of Africa. This is the type of thing that we see again and again with U.S. military missions in Africa.

Do you think this is largely a case of repeating the mistakes we’ve made in the Middle East — not understanding the complexity of these situations before we get involved?

Yeah, I think that’s exactly right. There’s just not a deep knowledge of who the players are often and what their aims are. And of course the U.S. military, they have one tool in their toolkit which is the hammer. So this is what they bring to bear wherever they see a problem and often it just has the effect of creating even more chaos in the name of fighting terror or creating stability.

Is this inability to reckon with the reality on the ground and the mistakes that we’ve made just being unwilling to admit defeat or is there something more ideological driving it?

Well it’s often difficult to figure this out, you know the Bush administration, they at least had a clear vision. No matter what you thought of it, they had a vision of how they wanted to see the world and, in many cases I think, the way they wanted to run the world. The Obama administration has basically been in a reaction mode for almost the entirety of the administration, they seem to be buffeted by one crisis after another and try to react to it, often in tragic and misguided ways.

Your most recent article from South Sudan covers another case where our actual role in the situation on the ground is pretty obviously and radically different from what’s portrayed by government officials in the media.

In this particular article, I talk about the waivers that the Obama administration put in year after year to allow South Sudan to use child soldiers. The idea behind this was that they could keep pumping money into the South Sudanese military to build a strong regional partner, professionalize the military, they were supposed to make it an ethical military, but it was just another crash and burn effort. Instead of getting the military they wanted for South Sudan, they got one that in December 2013 broke down and split across ethnic lines. The force that’s still loyal to the government carried out mass atrocities and also began increased recruitment of child soldiers. So everything that the U.S. tried for there was a complete and abject failure.

In one chapter you contrast our military strategy with China’s approach on the continent. How do you see that contrast and our competition with China progressing in the long run in Africa?

If you do any kind of travel in Africa, you see that Chinese influence is huge and it’s been growing in the last decade at an exponential rate. There are Chinese construction projects everywhere and you can see a real contrast. The U.S. has really pumped its aid money into these various anti-terror efforts and tried to play Whac-A-Mole all across the continent, chasing down terror groups while China has gone the economic route and made inroads all over the continent. Now I wouldn’t say that the Chinese approach has been uniformly good for African countries, they have these no-strings-attached policies where labor rights and environmental rights are cast by the wayside and it’s strictly dollars and cents, but what they do is provide roads and airports and stadiums, tangible examples of things that African people can see right in front of them. They’re pursuing a radically different route than we have, though you know recently it looks like China might be looking to follow our example. They’re looking at building a military base in Djibouti where the major U.S. base is, and they found a way under UN auspices to get Chinese troops into South Sudan to protect oil installations, so it’s possible that China will run into the same problems, given enough time, but right now the U.S. seems to be sowing more problems for itself as it goes while China reaps economic rewards.

Is there anything on the horizon that could reasonably change the way the U.S. is operating in Africa or is continued expansion of military activity an inevitability?

Yeah, I think expansion is not only the wave of the present but the wave of the future, when AFRICOM became an independent command in 2008, it had about 172 operations — training exercises and activities. That’s one mission every two days. But a couple weeks back I reported that AFRICOM carried out 674 missions last year — two missions a day, a 300 percent jump and it’s been a linear progression over these years. I don’t see any indication that they’re going to be slowing down any time soon.