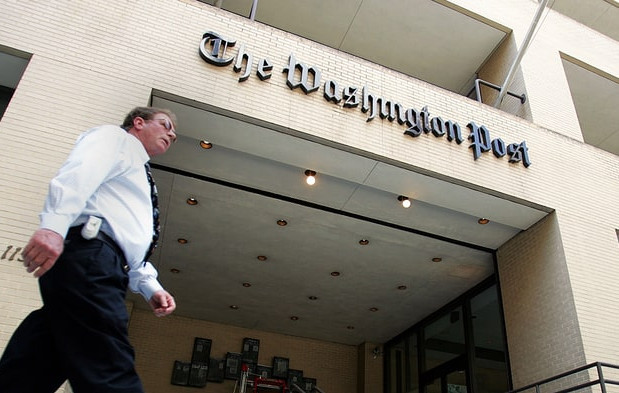 The ‘Washington Post’ ‘Blacklist’ Story Is Shameful And Disgusting

Last week, a technology reporter for the Washington Post named Craig Timberg ran an incredible story. It has no analog that I can think of in modern times. Headlined “Russian propaganda effort helped spread ‘fake news’ during election, experts say,” the piece promotes the work of a shadowy group that smears some 200 alternative news outlets as either knowing or unwitting agents of a foreign power, including popular sites like Truthdig and Naked Capitalism.

The thrust of Timberg’s astonishingly lazy report is that a Russian intelligence operation of some kind was behind the publication of a “hurricane” of false news reports during the election season, in particular stories harmful to Hillary Clinton. The piece referenced those 200 websites as “routine peddlers of Russian propaganda.”

The piece relied on what it claimed were “two teams of independent researchers,” but the citing of a report by the longtime anticommunist Foreign Policy Research Institute was really window dressing.

The meat of the story relied on a report by unnamed analysts from a single mysterious “organization” called PropOrNot – we don’t know if it’s one person or, as it claims, over 30 – a “group” that seems to have been in existence for just a few months.

It was PropOrNot’s report that identified what it calls “the list” of 200 offending sites. Outlets as diverse as AntiWar.com, LewRockwell.com and the Ron Paul Institute were described as either knowingly directed by Russian intelligence, or “useful idiots” who unwittingly did the bidding of foreign masters.

Forget that the Post offered no information about the “PropOrNot” group beyond that they were “a collection of researchers with foreign policy, military and technology backgrounds.”

Forget also that the group offered zero concrete evidence of coordination with Russian intelligence agencies, even offering this remarkable disclaimer about its analytic methods:

“Please note that our criteria are behavioral. … For purposes of this definition it does not matter … whether they even knew they were echoing Russian propaganda at any particular point: If they meet these criteria, they are at the very least acting as bona-fide ‘useful idiots’ of the Russian intelligence services, and are worthy of further scrutiny.”

What this apparently means is that if you published material that meets their definition of being “useful” to the Russian state, you could be put on the “list,” and “warrant further scrutiny.”

Forget even that in its Twitter responses to criticism of its report, PropOrNot sounded not like a group of sophisticated military analysts, but like one teenager:

“Awww, wook at all the angwy Putinists, trying to change the subject – they’re so vewwy angwy!!” it wrote on Saturday.

“Fascists. Straight up muthafuckin’ fascists. That’s what we’re up against,” it wrote last Tuesday, two days before Timberg’s report.

Any halfway decent editor would have been scared to death by any of these factors. Moreover the vast majority of reporters would have needed to see something a lot more concrete than a half-assed theoretical paper from such a dicey source before denouncing 200 news organizations as traitors.

But if that same source also demanded anonymity on the preposterous grounds that it feared being “targeted by Russia’s legions of skilled hackers”? Any sane reporter would have booted them out the door. You want to blacklist hundreds of people, but you won’t put your name to your claims? Take a hike.

Yet the Post thought otherwise, and its report was uncritically picked up by other outlets like USA Today and the Daily Beast. The “Russians did it” story was greedily devoured by a growing segment of blue-state America that is beginning to fall victim to the same conspiracist tendencies that became epidemic on the political right in the last few years.

The right-wing fascination with conspiracy has culminated in a situation where someone like Alex Jones of Infowars (who believes juice boxes make frogs gay) is considered a news source. Jones is believed even by our new president-elect, who just repeated one of his outrageous reports, to the effect that three million undocumented immigrants voted in the November 8th election.

That Jones report was based on a tweet by someone named Greg Phillips of an organization called VoteStand.

When asked to comment on his methodology, Phillips replied in the first person plural, sounding like a lone spree killer claiming to be a national terror network. “No. We will release it in open form to the American people,” he said. “We won’t allow the media to spin this first. Sorry.”

This was remarkably similar to the response of PropOrNot when asked by The Intercept to comment about its “list” report. The only difference was, Phillips didn’t use emoticons:

“We’re getting a lot of requests for comment and can get back to you today =)” PropOrNot told The Intercept. “We’re over 30 people, organized into teams, and we cannot confirm or deny anyone’s involvement.”

“They” never called The Intercept back.

Most high school papers wouldn’t touch sources like these. But in November 2016, both the president-elect of the United States and the Washington Post are equally at ease with this sort of sourcing.

Even worse, the Post apparently never contacted any of the outlets on the “list” before they ran their story. Yves Smith at Naked Capitalism says she was never contacted. Chris Hedges of Truthdig, who was part of a group that won the Pulitzer Prize for The New York Times once upon a time, said the same. “We were named,” he tells me. “I was not contacted.”

Hedges says the Post piece was an “updated form of Red-Baiting.”

“This attack signals an open war on the independent press,” he says. “Those who do not spew the official line will be increasingly demonized in corporate echo chambers such as the Post or CNN as useful idiots or fifth columnists.”

All of this is an outgrowth of this horrible election season we just lived through.

A lot of reporters over the summer were so scared by the prospect of a Trump presidency that they talked – in some cases publicly – about abandoning traditional ideas about journalistic “distance” from politicians, in favor of open advocacy for the Clinton campaign. “Trump is testing the norms of objectivity in journalism,” is how The Times put it.

These journalists seemed totally indifferent to the Pandora’s box they were opening. They didn’t understand that most politicians have no use for critical media. Many of them don’t see alternative points of view as healthy or even legitimate. If you polled a hundred politicians about the profession, 99 would say that all reporters are obstructionist scum whose removal from the planet would be a boon to society.

The only time politicians like the media is when we’re helping them get elected or push through certain policies, like for instance helping spread dubious stories about Iraq’s WMD capability. Otherwise, they despise us. So news outlets that get into bed with politicians are usually making a devil’s bargain they don’t fully understand.

They may think they’re being patriotic (as many did during the Iraq/WMD episode), but in the end what will happen is that they will adopt the point of view of their political sponsors. They will soon enough denounce other reporters and begin to see themselves as part of the power structure, as opposed to a check on it.

This is the ultimate in stupidity and self-annihilating behavior. The power of the press comes from its independence from politicians. Jump into bed with them and you not only won’t ever be able to get out, but you’ll win nothing but a loss of real influence and the undying loathing of audiences.

Helping Beltway politicos mass-label a huge portion of dissenting media as “useful idiots” for foreign enemies in this sense is an extraordinarily self-destructive act. Maybe the Post doesn’t care and thinks it’s doing the right thing. In that case, at least do the damn work.