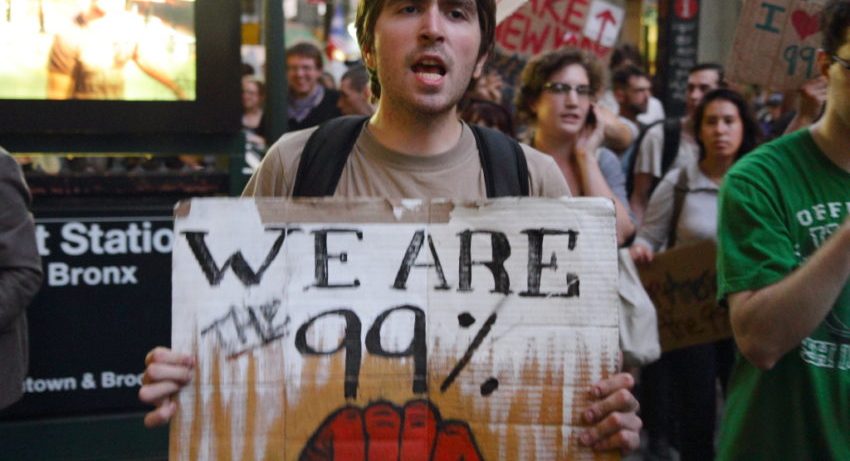 The Wealthiest Americans Haven’t Paid Their Fair Share In Decades

Above Photo: A man at an Occupy Wall Street protest in 2011. (Paul Stein/Flickr)

A rigged tax system to protect the wealthy is one of many ways that laws and policies create a wealth divide. This moving graphic shows how since the 1950s taxes on the wealthy have virtually disappeared into a flat tax and now the wealthy are even paying less than the working class. Click on the image below to see how taxes have been changed to protect the wealthiest people in the US.

Watch how radically taxes on the wealthy have fallen over the past 70 years:

This reality is one of the reasons why the vast majority of people in the United States support a variety of taxes on the wealthy.

Donald Trump tried to sell America on his 2017 tax bill by calling it a middle class tax cut, and regurgitating Reagan-era talking points about how tax cuts for the wealthy actually benefit everyone. As Heather Long warns in The Washington Post however, while some middle class families got a modest cut in 2018, in 2019, millions of Americans were—or were about to be—“surprised to learn that their refunds will be less than expected or that they owe money to the Internal Revenue Service.”

If 2019 wasn’t your first tax-time shock—and if many years of surprise have turned to anger, and you suspect that the wealthiest Americans have spent those same years free from tax-time shock—David Leonhardt’s latest column in The New York Times has a simple, but scarily effective illustration that will confirm your worst fears.

Using this simple interactive graph you can scroll from 1950 until today, and watch the line showing the tax rate the rich pay move lower and lower.

The graph uses data from a new book, “The Triumph of Injustice: How the Rich Dodge Taxes and How to Make Them Pay,” by UC Berkeley economists Emmanuel Saez and Gabriel Zucman. It reveals what many Americans have long suspected (and seen in their bank accounts): Not only do the rich really pay less in taxes, but, “For the first time on record, the 400 wealthiest Americans last year paid a lower total tax rate — spanning federal, state and local taxes — than any other income group,” Leonhardt writes.

Taxes that apply primarily to the wealthy, like the estate tax and corporate taxes, have declined, while payroll taxes, which impact low- and middle-income earners more—and not to mention fund Social Security and Medicare—have increased.

In addition, Leonhardt continues, “Families earning from $200,000 to $1 million will see their tax bills drop about 9 percent next year according to Congress’s official scorekeeper, the nonpartisan Joint Committee on Taxation. That’s 1 percentage point more than the tax cut for households earning $75,000.”

Some of Saez and Zucman’s conclusions have been hinted at in previous studies. From 2001-2018, 65% of the savings from tax cuts went to the richest fifth of Americans; 22% of that to the top 1%, according to an analysis from the Institute on Taxation and Economic and Policy. “If you look at the richest 1 percent, they’re getting more than the bottom 60 percent of Americans,” Steve Wamhoff, director of federal tax policy at the institute and one of the report’s authors, told Vox’s Emily Stewart in 2018.

What makes these latest revelations different from previous studies is their book’s scope, both in timeframe and detail. Per Leonhardt:

[Saez and Zucman] have constructed a historical database that tracks the tax payments of households at different points along the income spectrum going back to 1913, when the federal income tax began. The story they tell is maddening — and yet ultimately energizing.

“Many people have the view that nothing can be done,” Zucman told me. “Our case is, ‘No, that’s wrong. Look at history.’ ” As they write in the book: “Societies can choose whatever level of tax progressivity they want.” When the United States has raised tax rates on the wealthy and made rigorous efforts to collect those taxes, it has succeeded in doing so.

It may feel like too much to hope for, but two presidential candidates, Bernie Sanders and Elizabeth Warren, have based their economic policies off of Saez and Zucman’s research.