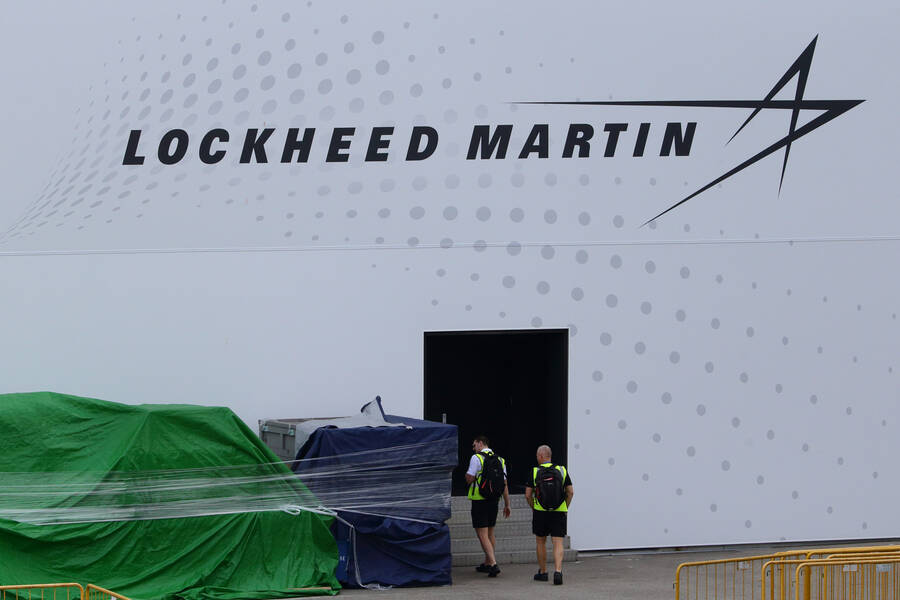 Weapons Industry Is Jubilant About Biden’s Nominee For Arms Buyer

Above Photo: A man looks at the container goods sitting outside the Lockheed Martin booth during the Singapore Airshow media preview on February 9, 2020 in Singapore. Suhaimi Abdullah / Getty Images.

Bill LaPlante’s Nomination Is Just The Latest Spin Through The Revolving Door Between The Pentagon And The Military Industry.

A weapons industry trade group that represents companies including Lockheed Martin and Raytheon is thrilled about President Joe Biden’s nominee for the role of lead weapons buyer for the U.S. military. In a statement released November 30, Arnold Punaro, board chairman of the National Defense Industrial Association (NDIA), which calls itself a trade association for the “defense industrial base,” proclaimed that the president “made the superb choice of nominating Dr. Bill LaPlante to be the undersecretary of Defense for acquisition and sustainment.”

LaPlante is being poached directly from the military industry that is praising him, which he entered after serving in an acquisitions role under the Obama administration, where he was known for shepherding through major (and controversial) programs, such as the acquisition of the F‑35 fighter jet.

By moving from government to industry, then back to government (should the Senate confirm him), all while the weapons industry cheers, LaPlante has spun through a well-trodden revolving door — a career trajectory that is entirely routine, but nonetheless scandalous.

In a November 30 White House statement, President Biden praised LaPlante as a “seasoned national security leader with nearly four decades of experience in acquisition, technology, sustainment and the defense industrial base.” The president is nominating LaPlante for the role of Under Secretary for Acquisition and Sustainment at the Department of Defense, which has been vacant since Ellen Lord stepped down from the position in January.

LaPlante is currently the president and chief executive officer of Charles Stark Draper Laboratory, a contractor for the U.S. military, where he has served since 2020. As recently as November 2, the company announced that it “has been selected by the U.S. Air Force as one of 55 contractors on a digital engineering contract that aims to increase the service’s ability to work on digital designs of its future platforms.” The price tag is massive, potentially amounting to $46 billion over 11 years, according to the company.

This is just one of numerous contracts with the U.S. military held by Charles Stark Draper Laboratory. The most recent one was announced just 13 days before Biden announced the nomination of LaPlante.

Before Charles Stark Draper Laboratory, LaPlante served as senior vice president and general manager of the Center for National Security at the MITRE Corporation, which also contracts with the U.S. military.

But perhaps most telling is LaPlante’s role as Obama’s Assistant Secretary of the Air Force for Acquisition, Technology and Logistics from 2014 to 2017. During his tenure, LaPlante prioritized three weapons programs: Northrop Grumman’s B‑21 Long Range Strike-Bomber, Lockheed Martin’s F‑35 fighter jets, and Boeing’s KC-46 tankers, which are used to refuel B‑52 bombers and other aerial attack vessels (though they have a troubled history).

The NDIA, which represents all of the manufacturers of the previously mentioned weapons systems, released a statement gushing about Biden’s nomination of LaPlante, and urging his quick confirmation. Punaro, board chairman of the NDIA, said on November 30, “LaPlante has a wealth of experience in government service and the responsibilities of this position. We urge his speedy confirmation.”

The relationship between LaPlante and Punaro is not new. In 2014, Punaro introduced LaPlante, then serving on the Obama administration, at an Atlantic Council event that was co-sponsored by NDIA. He praised LaPlante’s “strong leadership,” calling him “a doer, not a ditherer.” Punaro emphasized, “He’s a true believer in the two-way street with industry.”

At the 2014 event, LaPlante identified the B‑21, F‑35 and KC-46 programs as the priorities of his tenure, saying they are “critical to the future of the Air Force literally for decades to come.” He emphasized his partnerships and frequent communication with CEOs of weapons companies, addressing by name those gathered in the room.

Upon nominating him, Biden praised LaPlante’s role in advancing these weapons programs, singling out the fact that he “forged a path forward” on the B‑21 bomber. The development, production and operation of this program is expected to cost $200 billion over the course of 30 years. (The program is still in the engineering stage.)

The U.S. acquisition of F‑35s, meanwhile, has been the subject of fierce protests over the fighter jets’ environmental harms, human toll and astronomical costs. In 2019, a spokesperson for Operation Inherent Resolve, the name of the U.S. military campaign against ISIS, boasted that F‑35s and F‑15s had been used to drop 80,000 pounds of bombs on Iraq’s Qanus Island, located in the Salah ad Din Province.

Punaro isn’t the only weapons industry representative happy about LaPlante’s nomination. Herbert “Hawk” Carlisle, head of the NDIA, told Defense News, “Bill would be an outstanding [acquisition and sustainment] leader. He has a great background and understanding of the industry, which also has a high and deep respect for him.”

LaPlante is in good company. In July, the president announced the nomination of Andrew Hunter, also an Obama administration Department of Defense alum, for the role of assistant Air Force secretary for acquisition, technology and logistics. Hunter is a senior fellow for the International Security Program at the Center for Strategic and International Studies, a think tank that receives funding from weapons companies, including Lockheed Martin and Boeing. (Weapons companies often fund think tanks that advance industry policy objectives, through a more academic and seemingly “above the fray” approach.) Biden has also nominated Gabe Carmarillo, senior vice president of the Army business unit for Science Applications International Corp., a weapons manufacturer, for the role of undersecretary of the Army.

NDIA is urging the swift confirmation of these nominees as well.

Direct military industry ties go all the way up the Biden administration’s cabinet: The Secretary of Defense, Gen. Lloyd J. Austin III, served on the board of directors for Raytheon. What makes LaPlante’s connections so noteworthy is just how unremarkable his nomination is — any controversy about his industry ties has been entirely absent from public discourse.

It’s dubious that there is such a thing as a “good” buyer of weapons for the U.S. military, arguably the most violent institution on Earth. But the fact that the next prospective one is drowning in military industry largesse, reveals a great deal about what keeps this institution growing — and who benefits.

As Alex Y. Ding, co-director of organizing at Dissenters, a youth anti-militarism organization, puts it, “Executives representing U.S. military contractors, including Draper Laboratories’ LaPlante, are often tapped to be in high level positions in the Pentagon, or in government departments that oversee security and defense. And our elected officials empower them by writing blank checks, and agreeing to let them operate with little to no accountability to us.”