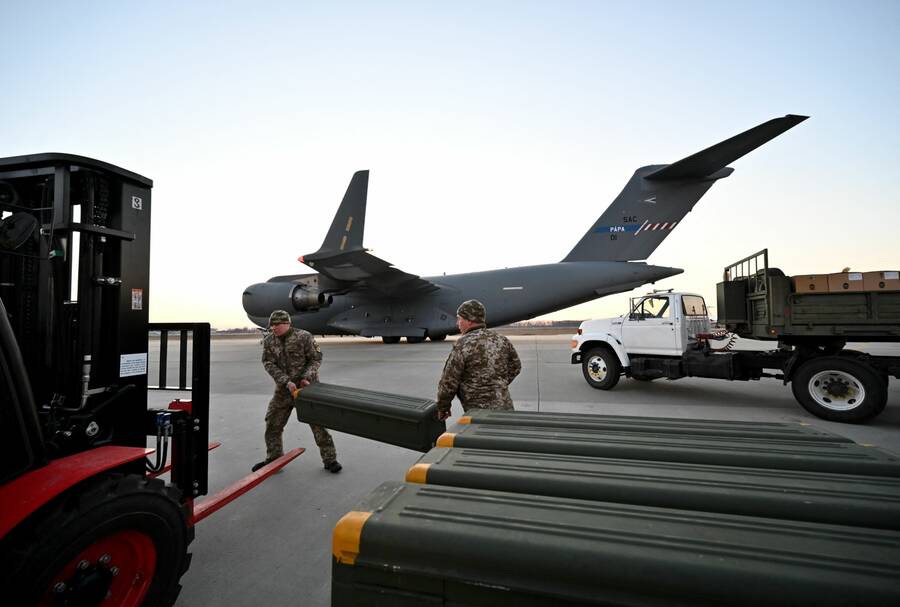 The Weapons Industry Sees The War In Ukraine As A Goldmine

Above Photo: Members of the Ukrainian Military Forces move U.S.-made FIM-92 Stinger missiles and the other military assistance at Boryspil Airport in Kyiv on February 13, 2022. (Sergei Supinsky / AFP Via Getty Images)

Since the pandemic began in early 2020, the weapons industry has argued that shutdowns and supply chain disruptions have put the “defense industrial base” in peril, compromising the national security and military “readiness” of the United States.

Now, that same industry is using Russia’s invasion of Ukraine and NATO’s subsequent military buildup to double down on the argument, demanding rapid, public investments in the weapons industry to bolster the capacity of the United States and NATO for “deterrence.”

The NDIA counts among its members some of the biggest weapons manufacturers in the world, including Raytheon and Lockheed Martin. On March 25, Thomas Low, an NDIA junior fellow, published a piece in National Defense which argues that, to “adequately remain vigilant” against a possible widening conflict with Russia, “the United States in its own right needs to take the steps necessary to prepare its defense industrial base.”

The term “defense industrial base” conveniently sidesteps conversations about whether the manufacturing of lethal military weapons is critical (or healthy) for a society in the grips of a public health crisis, not to mention for the societies targeted by that weaponry. It also lends an air of innocuousness to manufacturers of tankers and bombs and fighter jets, as if they are a crucial part of U.S. infrastructure (like medical systems or public transit), rather than a war-making industry.

And since the beginning of the pandemic, the defense industrial base has been deemed “essential” by the federal government and the Pentagon, any lapse considered a potential compromise of the war-fighting power of the United States. This “essential” designation has been used to keep military factories open and workers punching the clock, even during the most deadly Covid-19 surges.

Low goes on to highlight the findings of the NDIA annual report about the “health and readiness of the defense industrial base,” titled “Vital Signs,” published in February. The report argues that the domestic military industry is in a state of deterioration and tumult because of the “extraordinary ramifications of the Covid-19 pandemic, which dramatically disrupted the lives of individual Americans as well as global commerce.” It goes on to say, “This year, five of the eight [vital] signs received a failing grade.” Those alleged failures are in the categories of production inputs, innovation, supply chain, industrial security, and productive capacity and surge readiness.

In other words, the NDIA found (unsurprisingly, since it’s the industry’s own lobbying group) that, by its own metrics, the industry is in desperate need of “modernization” (to line the pockets of its constituent corporate members). Tellingly, the NDIA also found most “signs” of defense base health also had a failing grade in 2018, 2019, 2020 and 2021.

The weapons industry, as reliant on federal contracts as it is, has an obvious interest in making itself seem both vital for the country and somehow barely surviving. This logic has been remarkably effective at securing significant bailouts for the military industry during the pandemic. For example, section 3610 of the CARES Act — the $2.2 trillion pandemic relief package passed in March 2020—permitted the Pentagon to pay contractors unable to work because of Covid-19 closures, a measure that was extended three times and was aggressively backed by the NDIA and other military industry trade groups. Its entire premise rests on the idea that the weapons industry is so vital to national wellbeing that it must be provided its own, separate lifeboats. (According to a July 2021 report from the Government Accountability Office, the Department of Defense reimbursed “$73.2 million in paid leave costs” under this provision.)

Low goes on to argue that NATO needs to extend its military presence and that the supposedly dilapidated state of the defense industrial base makes this expansion difficult. “In the Baltic region, for example, NATO lacks a significant military presence,” Low writes. ”It would be difficult and time-consuming to try and surge much-needed personnel into the Baltic region should it prove necessary,” he adds.

The NDIA has long argued vigorously for broad investments in the U.S. military industry, but Russia’s brutal invasion of Ukraine gave the organization a new opportunity to demand even greater investments. Low’s argument is a sleight of hand: Not only is he insisting that the United States should pay the U.S. military industry for weapons for Ukraine, but he’s arguing that — to protect the ability of the United States and NATO to respond to this and future conflicts — the military industry needs broad support and a perpetual war machine at the ready. (Never mind that the U.S. military budget is already larger than that of the next 11 most-expensive world militaries, combined.)

This demand is being put forward despite the fact that the military industry has been showered with public investments far beyond pandemic-specific bailouts. President Joe Biden is requesting $813 billion for the Pentagon and military-related programs for the coming fiscal year, an amount that has a good chance of climbing even higher. This proposal includes $50.9 billion in nuclear weapons spending, which includes investment in an intercontinental ballistic missile system that activists warn will increase the danger of nuclear escalation with Russia.

The weapons industry has itself expressed pleasure with the high levels of military spending secured, year after year, by bipartisan members of Congress. Upon passage of the 2022 National Defense Authorization Act, which sets military budgets, the NDIA gushed that “the bipartisan votes demonstrate that national defense and support for our service members remain unifying values.”

Weapons companies have even boasted to investors about bipartisan support for high levels of military spending — as Jim Taiclet, CEO of Lockheed Martin, did during a January 25 earnings call:

This quarter, Congress passed the fiscal year 2022 National Defense Authorization Act with strong bipartisan support in both the House and Senate. The NDAA policy bill was subsequently signed into law by President Biden.

This legislation authorizes a $25 billion increase for the Department of Defense for a total of approximately $740 billion for defense programs and raised the investment accounts approximately 8% above the President’s originally requested amounts. Currently, the DOD is operating under a continuing resolution through February 18 for FY 2022. As Congress continues the appropriations process, we believe our programs are well supported…

Yet, while the military industry complains its “base” remains dilapidated and poorly equipped to respond to a crisis, it is also boasting about the windfalls it is likely to see as a result of Russia’s invasion of Ukraine. In a March 25 interview with Harvard Business Review, Greg Hayes, CEO of Raytheon, seemed gleeful that the Ukraine crisis might bring in more profits. The interviewer mentioned that “some took issue” with Hayes’ “public comments … about how the conflict would likely result in an increase in your business.”

Look, we don’t apologize for making these systems, making these weapons. The fact is, they are incredibly effective in deterring and dealing with the threat that the Ukrainians are seeing today. The Javelin anti-tank weapon system is a modern marvel. It can take out a main battle tank from two and a half miles away. The Stinger anti-aircraft missile, which frankly has been around since the late ’70s, is incredibly effective in targeting low flying aircraft, helicopters, and even jets and other missiles coming in at less than 10,000 feet.

So I make no apology for that. I think again recognizing we are there to defend democracy and the fact is eventually we will see some benefit in the business over time. Everything that’s being shipped into Ukraine today, of course, is coming out of stockpiles, either at DOD or from our NATO allies, and that’s all great news. Eventually we’ll have to replenish it and we will see a benefit to the business over the next coming years.

Indeed, there are reasons to think the crisis will improve weapons companies’ long-term profits — something Raytheon and Lockheed Martin had already assured investors in January, before Russia’s invasion even began. An April 3 article, published in France 24, says weapons companies can expect to profit from the war over the long-term, even if the gains are not immediately felt.

“Like other Western countries, the United States has turned to its own stocks to furnish Ukraine with shoulder-fired Stinger and Javelin missiles, for instance,” the article states. “These weapons from Lockheed Martin and Raytheon Technologies were paid for some time ago.”

When these stockpiles are replenished, corporate weapons executives say, the profits will come in. What’s more, according to Burkett Huey, of financial services company Morningstar, the companies stand to gain just from the perception that the world is a more dangerous place. As Huey told France 24: “People are starting to realize that the world is a lot less safe and there’s probably going to need to be increased investment in defense products, which would benefit the contractors.”

But weapons companies have their sights set far beyond Stinger and Javelin missiles. They recognize they can use Russia’s violence to bloat their industry across the board. This strategy, outlined by the NDIA, should not be underestimated. The weapons industry has a powerful lobby. According to Brown University’s Costs of War Project, “Weapons makers have spent $2.5 billion on lobbying over the past two decades, employing, on average, over 700 lobbyists per year over the past five years. That is more than one for every member of Congress.”

The NDIA itself recently announced that, as of May 1, former Deputy Secretary of Defense David Norquist will be the association’s president and CEO, a telling reveal of how closely government and industry are related.

The companies that comprise NDIA have supplied the weapons used in some of the most horrifying atrocities of our times. Lockheed Martin made the bomb, for example, that was fired by the U.S.-Saudi coalition at a school bus in northern Yemen in August 2018, which left at least 26 children dead. Raytheon manufactured the bomb that blew up a detention center in Sa’adah, northwestern Yemen, in January, killing at least 80 people. These companies ship weapons across the globe, making the United States the largest arms exporter in the world, which itself feeds into an arms race with Russia.

By resorting to such euphemisms as “defense industrial base” and “readiness,” the weapons industry is attempting to bolster its profits in the midst of a global crisis — and its friends in Washington are listening.