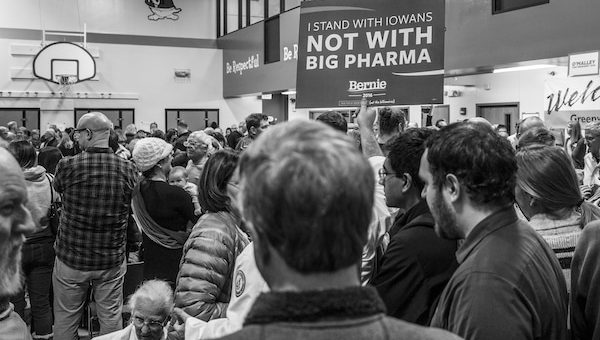 After his disastrous handling of the COVID-19 epidemic, Trump is trying to improve his waning electoral chances by reserving all of Gilead’s stock of remdesivir.

The U.S. has bought up almost all of the stock of remdesivir from Gilead, making it nearly impossible for this COVID-19 drug to be available anywhere else in the world. After making America sick again, Trump is trying to compensate for his administration’s failure by buying Gilead’s production for the next three months for the U.S., leaving nothing for the rest of the world.

This makes it all the more urgent for India and other countries that featured prominently in previous drug license fights against Big Pharma in the U.S. and around the world for more than a decade to break Gilead’s patent and issue compulsory licenses to manufacture the drug locally. The patent laws of most countries and the World Trade Organization’s 2001 Doha Declaration have clear provisions for compulsory licensing during a health emergency or an epidemic. COVID-19 obviously qualifies on both accounts.

On July 1, the U.S. reached a point of more than 50,000 new COVID-19 cases in a single day, about 23 percent of the 218,000 new cases worldwide that day, making it the global leader on how not to fight the COVID-19 epidemic. As of July 1, Brazil and India were in second and third place, respectively, for new cases.

Remdesivir is the only drug that in drug trials has shown some benefit in fighting the virus infection. Remdesivir works by reducing the replication of the virus in the human body, and this helps in shortening the hospital stay of the patient by about 25 percent. If the patient progresses to a more serious stage, needing oxygen support or ventilation, remdesivir is of little help. Here, anti-inflammatory drugs like dexamethasone become important. Dexamethasone has shown efficacy treating COVID-19 patients in clinical trials, and, unlike remdesivir, it works by reducing lung inflammation arising out of the infection, rather than by fighting the infection itself. Dexamethasone is off-patent and is widely available at low costs.

I have argued previously that after the battle for access to cheap AIDS drugs, the next big battle would be fought over COVID-19 medicines and vaccines. In the World Health Assembly, the U.S. was the only country that opposed the resolution that all medicines and vaccines should be put in a common patent pool, and accessible to all countries at reasonable costs.

We now know the reason for the U.S. opposition. It wants control over medicines and vaccines for the fight against the pandemic. One reason is to make U.S. citizens feel that Trump is looking after them by providing medicines, even if his administration has failed miserably in the fight against COVID-19. The second reason is that by controlling the medicine for the rest of the world, Trump can bargain with them and try to regain the global hegemon status that the U.S. has lost.

With this step, the U.S. has also made clear its intention regarding COVID-19 vaccines. The U.S. has backed a set of five companies with a $13 billion purse, as a part of its Operation Warp Speed to support vaccine development. One of these five is Moderna, a U.S. biotech company, and one of the frontrunners in the current vaccine trials. The other four backed by the U.S. are AstraZeneca (in consortium with Oxford University); Johnson & Johnson; Merck; and Pfizer with BioNTech. If any of these vaccines succeed and others do not, we can expect the U.S. will guard that vaccine as it is doing with COVID-19 medicine in the case of remdesivir. Fortunately for the world, there are a total of 17 vaccines in the World Health Organization’s list of ongoing clinical trials, and another 132 in the pipeline.

Apart from the U.S. buying up almost all of the remdesivir stock, the other issue in making remdesivir accessible to those who need it is the price at which Gilead is selling this drug. For U.S. patients, the cost is about $3,000 for a typical five-day course (which consists of six vials of the drug—two on the first day, and one per day after that). Gilead has granted a handful of licenses to drug manufacturers in other countries—including three Indian companies, Cipla, Hetero and Jubilant—to sell generic remdesivir. This means a full course of remdesivir to Indian patients will cost about $400 (at $66 per vial, for six vials).

What is the actual cost of a course of remdesivir? According to an article in the Journal of Virus Eradication by Hill et al in April, the active pharmaceutical ingredient for one day’s treatment should not cost more than $1. If we add to that the cost of making it into the typical five-day course of six injections, the total cost should not be more than $6. Calculations by two authors from the Institute for Clinical and Economic Review in the U.S. use Hill’s data to estimate that the price of remdesivir for a full course of treatment (they use a longer course of 10 days) in the U.S. should be less than $10.

Why should a full course of remdesivir, costing less than $10 to produce, be priced at $3,000, or 300 times its cost of production, in the U.S.? Even at Gilead’s concessional price of $400 for India, it is still 40 times the cost of its production! Gilead’s argument is that because its medicine decreases the duration of hospitalization, it saves COVID-19 patients about $12,000 each in hospital bills—and by charging only one-fourth of that, even if it is 300 times the cost of production, Gilead is doing the customers a big favor.

As we know from the results of the clinical trials, remdesivir fights the virus, but if the patient becomes seriously ill, it does not have a statistically significant impact on mortality rates. If it did, Gilead’s price probably would have factored in lifetime earnings saved by remdesivir, and its price would probably have been even 10 times higher!

But even if remdesivir becomes significantly cheaper, it is uncertain that it can get to countries outside the U.S. thanks to the U.S.’s plan to buy almost all of Gilead’s stock of the drug. So what can the rest of the world do? It may need to prepare to fight a long battle, as India and other countries did during the AIDS epidemic against the U.S. and its drug cartel allies like Switzerland, France, the UK and Germany.

Big Pharma priced AIDS drugs around $10,000-15,000 for a year’s worth of treatment in the U.S. and Europe, and a ‘concessional’ price of $4,000 for poor countries. Indian companies were manufacturing the generic version of these drugs at a fraction of these prices, but countries who wanted to import AIDS drugs from India faced lawsuits and political pressure from the U.S.

This battle was fought for nearly a decade. In the World Trade Organization’s Doha Round in 2001, the Doha Declaration accepted that in the case of a health emergency or an epidemic, any country has the right to issue a compulsory license for producing lifesaving drugs. And the license to produce the drug could be issued even to a company outside the country’s borders. Indian generic drug manufacturer Cipla could then supply the AIDS drugs at $350 for a year’s course to a number of countries, which would otherwise have been completely bankrupted by patented drugs’ higher prices—or else they would see their AIDS patients die in large numbers without medicines.

The victory to secure cheap generic AIDS drugs sets a precedent for the current pandemic. COVID-19 has already killed an estimated half a million and infected more than 10 million. No one can dispute that is both a health emergency and a pandemic. The remedy of using a compulsory license already exists in most countries’ patent laws and in the Doha Declaration.

Why, then, are other countries not starting the manufacture of remdesivir? Are they hoping that Gilead and the U.S. will behave better than they did earlier during the AIDS epidemic? Or are they afraid of the threat of retaliatory sanctions from the U.S.?

Every year, the U.S. Office of the United States Trade Representative (USTR) issues a Special 301 Report that it has used to threaten trade sanctions against countries that don’t comply with its patents. India figures prominently in this report year after year, for daring to issue a compulsory license in 2012 to Natco to sell the cancer drug nexavar for less than 3 percent of Bayer’s price of more than $65,000 a year. After India issued the compulsory license on Nexavar, Marijn Dekkers, the CEO of Bayer, said, “We did not develop this medicine for Indians… We developed it for Western patients who can afford it.”

In April, Indian Prime Minister Narendra Modi buckled under Trump’s threat and exported hydroxychloroquine to the U.S. even though it was under an export ban at that time. Will he—and the leaders of other countries—be willing to stand up to the U.S. on remdesivir? Or will they agree with Trump that remdesivir should be reserved for only U.S. patients, even if they have the capacity to produce it for their people?

Prabir Purkayastha is the founding editor of Newsclick.in, a digital media platform. He is an activist for science and the Free Software movement.

This article was produced in partnership by Newsclick and Globetrotter, a project of the Independent Media Institute.