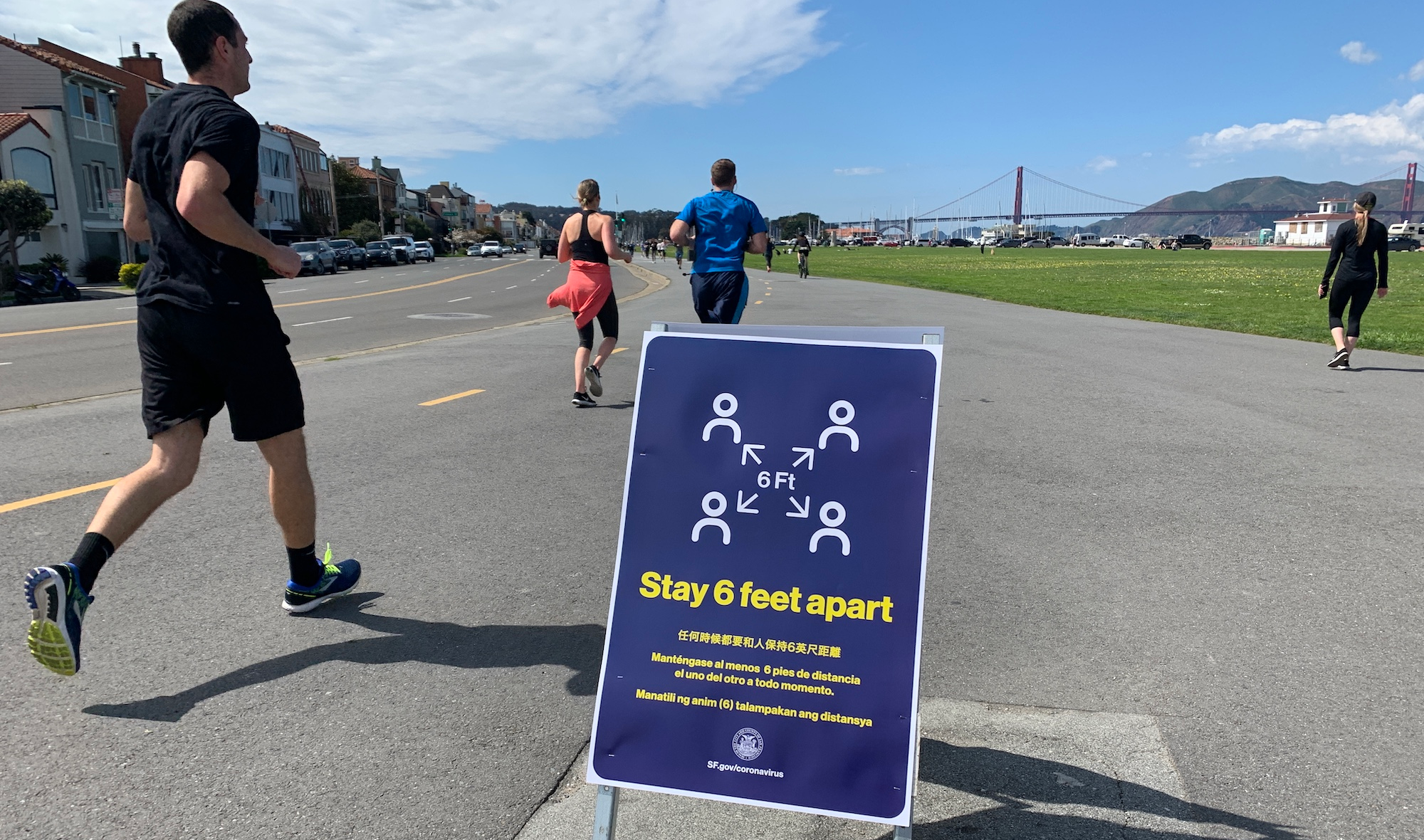 The World Is On Lockdown – Where Are The Carbon Emissions Coming From?

Above photo: San Francisco residents are allowed to go outside as long as they stay six feet apart. Katie Canales/Business Insider.

Pedestrians have taken over city streets, people have almost entirely stopped flying, skies are blue (even in Los Angeles!) for the first time in decades, and global CO2 emissions are on-track to drop by … about 5.5 percent.

Wait, what? Even with the global economy at a near-standstill, the best analysis suggests that the world is still on track to release 95 percent of the carbon dioxide emitted in a typical year, continuing to heat up the planet and driving climate change even as we’re stuck at home.

A 5.5-percent drop in carbon dioxide emissions would still be the largest yearly change on record, beating out the financial crisis of 2008 and World War II. But it’s worth wondering: Where do all of those emissions come from? And if stopping most travel and transport isn’t enough to slow down climate change, what will be?

“I think the main issue is that people focus way, way too much on people’s personal footprints, and whether they fly or not, without really dealing with the structural things that really cause carbon dioxide levels to go up,” said Gavin Schmidt, a climatologist and the director of the NASA Goddard Institute for Space Studies in New York City.

Transportation makes up a little over 20 percent of global carbon dioxide emissions, according to the International Energy Agency. (In the United States, it makes up around 28 percent.) That’s a significant chunk, but it also means that even if all travel were completely carbon-free (imagine a renewable-powered, electrified train system, combined with personal EVs and battery-powered airplanes), there’d still be another 80 percent of fossil fuel emissions billowing into the skies.

So where are all those emissions coming from? For one thing, utilities are still generating roughly the same amount of electricity — even if more of it’s going to houses instead of workplaces. Electricity and heating combined account for over 40 percent of global emissions. Many people around the world rely on wood, coal, and natural gas to keep their homes warm and cook their food — and in most places, electricity isn’t so green either.

Even with a bigger proportion of the world working from home, people still need the grid to keep the lights on and connect to the internet. “There’s a shift from offices to homes, but the power hasn’t been turned off, and that power is still being generated largely by fossil fuels,” Schmidt said. In the United States, 60 percent of electricity generation still comes from coal, oil, and natural gas. (There is evidence, however, that the lockdown is shifting when people use electricity, which has some consequences for renewables.)

Manufacturing, construction, and other types of industry account for approximately 20 percent of CO2 emissions. Certain industrial processes like steel production and aluminum smelting use huge amounts of fossil fuels — and so far, Schmidt says, that type of production has mostly continued despite the pandemic.

The reality is that emissions need to be cut by 7.6 percent every year to keep global warming from surpassing 1.5 degrees Celsius above pre-industrial levels — the threshold associated with the most dangerous climate threats — according to an analysis by the United Nations Environment Program. Even if the global lockdown and economic slump reduce emissions by 7.6 percent this year, emissions would have to fall even more the year after that. And the year after that. And so on.

In the middle of the pandemic, it’s become common to point to clear skies in Los Angeles and the cleaner waters of Venice as evidence that people can make a difference on climate change. “The newly iconic photos of a crystal-clear Los Angeles skyline without its usual shroud of smog are unwanted but compelling evidence of what can happen when individuals stop driving vehicles that pollute the air,” wrote Michael Grunwald in POLITICO magazine.

But these arguments conflate air and water pollution — crucial environmental issues in their own right! — with CO2 emissions. Carbon dioxide is invisible, and power plants and oil refineries are still pumping it into the atmosphere. Meanwhile, natural gas companies and livestock farming (think cow burps) keep releasing methane.

“I think people should bike instead of driving, and they should take the train instead of flying,” said Schmidt. “But those are small, compared to the really big structural things that haven’t changed.”

It’s worth remembering that a dip in carbon emissions won’t lead to any changes in the Earth’s warming trend. Some scientists compare carbon dioxide in the atmosphere to water flowing into a leaky bathtub. The lockdown has turned the tap down, not off. Until we cut emissions to net-zero — so that emissions flowing into the atmosphere are equivalent to those flowing out — the Earth will continue warming.

To first order, think of CO₂ concentrations in the atmosphere as the water in a bathtub & CO₂ emissions as the tap. The lockdowns mean the tap has been turned down slightly, so CO₂ is still streaming into the bathtub (& some leaks out the bottom)https://t.co/2MNQn6JRCI

That helps explain why 2020 is already on track to be the warmest ever recorded, beating out 2016. In a sad irony, the decrease in air pollution may make it even hotter. Veerabhadran Ramanathan, a professor at the Scripps Institution of Oceanography at University of California, San Diego, explained that many polluting particles have a “masking” effect on global warming, reflecting the sun’s rays, canceling out some of the warming from greenhouse gas emissions. With that shield of pollution gone, Ramanathan said, “We could see an increase in warming.”

Appreciate the bluer skies and fresher air, while you can. But the emissions drop from the pandemic should be a warning, not a cause for celebration: a sign of how much further there is to go.