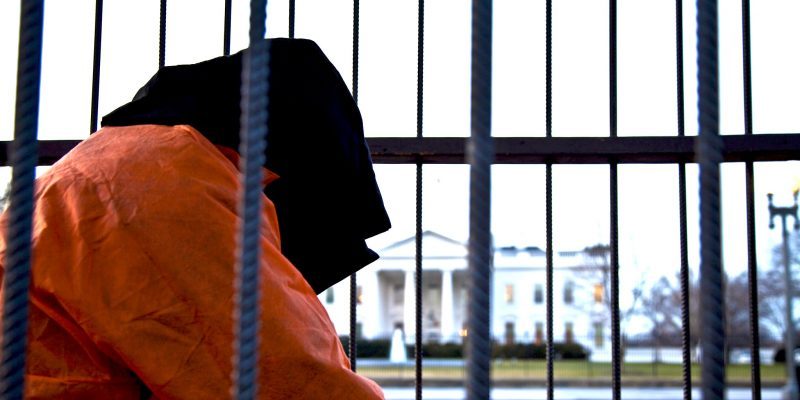 The World Is Rid Of Rizzo

Above Photo: Jan, 11, 2012: Protester outside the White House during a 96-hour cell vigil timed to end on the day the Guantanamo Bay detention center reached its 10th year. Justin Norman, Flickr, CC BY-NC-SA 2.0.

The former CIA lawyer was the unapologetic godfather of the agency’s torture program, a monstrous crime against humanity that he defended unabashedly until his death.

Last week I read in The Washington Post, The New York Times, and other outlets that former CIA Acting General Counsel John Rizzo had died.

Though I was brought up to say nothing about someone rather than something unkind, not a single kind word came to mind.  My mother would be disappointed to hear me say this, but the world is a better place without John Rizzo.

Rizzo was the unapologetic godfather of the CIA’s torture program, a monstrous crime against humanity that he defended unabashedly until his death.

He was a complicated man.  I knew him well going back to my days as the executive assistant to one of the CIA’s associate deputy directors.  When I was former CIA Director George Tenet’s morning briefer during the Iraq War, Rizzo routinely sat in on the sessions.

On the surface, he was a nice enough guy — quick with a smile and a nod.  He was dapper, with a well-groomed beard that made him look more like a 19th century businessman in search of a top hat rather than what he was: a seasoned, very political attorney whose job was to lay out the legal justifications for horrific crimes yet to be committed.

In 2002 I led a raid that captured Abu Zubaydah  — then thought to be No. 3 in Al Qaeda’s leadership. In 2014, Rizzo told Der Spiegel that immediately after Zubaydah’s capture.

“I walked around the CIA headquarters building, smoking a cigar by myself and basically pondered what to do next. I distinctly remember sort of playing out the scenario in my head that I would stop these proposals because they were too brutal. And let’s just say there had been a second terrorist attack in the ensuing days and, in the aftermath, Abu Zubaydah were to gleefully tell our interrogators, ‘Yes, I knew all about them, and you didn’t get me to talk.’ There would be hundreds, perhaps thousands of Americans dead on the streets again. And in the post mortem investigations, it would all come out that the CIA considered these techniques but was too risk averse to carry them out and that I was the guy who stopped them. I couldn’t live with the possibility of that someday happening.”

Asked if he regretted his decision to justify torture, he said: “I can’t honestly sit here and say I would have made any different decisions than the ones I made back in early 2002.”

Rizzo told The Hill in 2015, “Sure, I thought about the morality of it.  But the times were such that what I thought would have been equally immoral is if we just unilaterally dismissed the possibility of undertaking a program that could have potentially saved thousands more American lives.”

Rizzo missed the point in 2002 and he missed it again in 2014 and 2015.  Nobody doubted his patriotism.  Nobody doubted that he wanted to disrupt the next terrorist attack.  We all did.  But we also all took an oath to protect and defend the Constitution against all enemies foreign and domestic.

We took an oath to uphold the laws of the United States.  And no number of legal backflips can justify committing war crimes or crimes against humanity.  That’s what Rizzo authorized.  He opened a Pandora’s box that couldn’t be closed again.  He crossed a line that couldn’t be uncrossed.  He gave the green light for torture, murder and international kidnappings.

Rizzo made a joke out of the annual Human Rights Report that Congress mandates of the State Department every year.  And he never doubted or second-guessed himself.  He was supposed to be the Constitution’s last line of defense inside the CIA.  But instead, he pandered to the CIA’s leadership and to the politicians who put them there.

It’s interesting that the two people The Washington Post found to talk about Rizzo for his obituary were Tenet and former CIA Deputy Director John McLaughlin —  Rizzo’s bosses and co-conspirators in heinous, human rights abuses.

One of his post-CIA colleagues at the Washington, D.C., power law firm Steptoe & Johnson, however, analyzed Rizzo’s career more clearly, perhaps not even realizing what he was saying.  He wrote on Lawfare blog,

“For decades [Rizzo] was the last word on what CIA operatives could and could not do within the law.  He knew that these judgments were as much about political prognostication as about applying abstract principles of law, and that critics of the American intelligence agencies would always second-guess his conclusions.  He knew that using harsh interrogation techniques would sooner or later make the agency vulnerable to claims of lawlessness and torture.  He may not have been convinced that the techniques in question would be crucial to preventing another attack or defeating al-Qaeda, but he was clear that the final call should not be made by lawyers.  He threw everything into the effort to give the nation’s leaders room to make the decision, including, it turned out, his own reputation.”

And there it is:  the admission that Rizzo cared more about — even sacrificed his career for — politics, rather than for the Constitution and the rule of law.  Rizzo could have said, “This is wrong.  We’re a nation of laws.  We’re a nation of respect for human rights.  We won’t put ourselves on the same level with the terrorists.”  But he didn’t.  That will be his legacy.