The World Is Uniting For International Law, Against US Empire

“We oppose the extraterritorial application of unilateral measures.“

That is not Cuba, Nicaragua, Iran, Russia, or China talking about the most recent unilateral coercive measures imposed by the United States against Venezuela, i.e. economic sanctions that have become an economic blockade, but the European Union. Even allies who have embarrassed themselves by recognizing the phony “interim president” Juan Guaido are saying the US has gone too far.

All of the countries listed above and many more have stated their opposition to the escalation of the US economic war against Venezuela. Venezuela, along with Iran, has become a prime target of US regime change, and both are uniting the world in opposition to US bullying behavior, which is hastening the demise of US domination. Popular social movements are growing against US unilateralism and violations of international law. 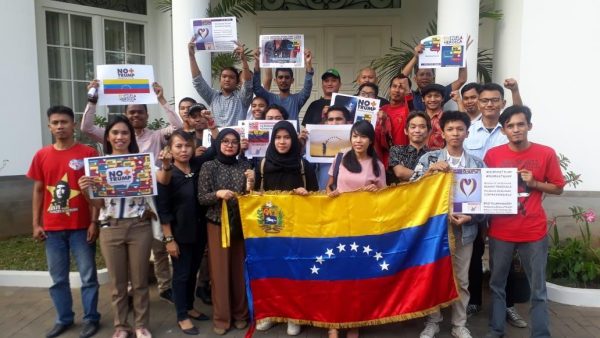 Activists in Indonesia on the World Day of Protest against the US blockade of Venezuela. Telesur.

Countries of the World are Uniting Against the United States

Six months ago, the US sought to install a puppet government led by Juan Guaido. Guaido, trained by the US, was an unknown personality to most Venezuelans. He is a minor politician who barely won election to the defunct National Assembly. Today, the failure of the US coup attempt is evident. Repeated efforts by Guaido, his allies and the United States to rally support for Guaido from the people and Venezuelan military have failed.

A large rebuke on the international stage occurred in July when delegations from 120 countries of the Non-Aligned Movement (NAM) united to oppose US policy against Venezuela, saying in a statement that only Venezuela can decide its fate, no other state can intervene in accordance with the United Nations Charter. The UN General Secretary pointed out the importance of the Non-Aligned Movement when she spoke at the beginning of the conference, stating that “two-thirds of the United Nations members and 55% of the world’s population” are represented by it, making it the second-largest multinational body in the world after the UN.

Javad Zarif, the Foreign Minister of Iran, put the US intervention against Venezuela in context, declaring upon his arrival for the meeting: “The resistance of the people of Venezuela against the United States is very important for all the countries of the world.”

The economic blockade, announced last week, has also escalated opposition to dollar domination. There are now 21 countries on the US sanctions list and scores of other countries are impacted by US sanctions. In reality, what the US is doing is imposing unilateral coercive measures against these countries, which violate the United Nations Charter. Sanctions imply there was a formal action that justified punishment, but that is not the case here.

The Caracas Declaration was passed at the NAM meeting. As Anya Parampil reported in the Grayzone, “the delegates unanimously affirmed their pursuit of a multipolar world and a desire to construct an international financial system independent of US control.”

The Declaration also contained a clause calling for following the Vienna Convention, which includes a provision to protect diplomatic missions. No doubt this was in response to the US seizure of Venezuelan diplomatic properties, highlighted by the work of the Embassy Protection Collective to uphold international law.

Support the defense of the Embassy Protection Collective
against federal criminal prosecution, join in calling for dropping the charges and raising funds for the legal defense. 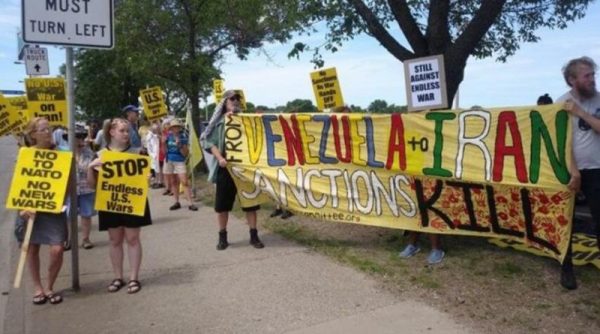 Minneapolis, July 15 (RHC) Demonstrators in the state of Minnesota condemned U.S. sanctions against Iran, Venezuela and Cuba and expressed solidarity with the peoples of these countries.

At the NAM meeting, representatives of various countries described the impacts of the US’ economic war on their people. Zarif of Iran made the point clear: “Just Google ‘terrorism.’ This is the definition that the dictionary will give you: ‘unlawful use of violence or intimidation, especially against civilians, in pursuit of political gains’… so please friends, stop using [the term] ‘sanctions’… sanctions have a legal connotation. This is economic terrorism… we have to say it again and again.”

Illegal unilateral coercive measures have contributed to the deaths of 40,000 Venezuelans in 2017 and 2018. A leading Venezuelan Economist, Francisco Rodríguez, says the Trump Administration’s sanctions are costing Venezuela $16.9 billion annually and threaten a famine that could cause hundreds of thousands of deaths. Two days after Trump’s new Executive Order was signed, a ship carrying 25 thousand tons of soy-made products for food production in Venezuela was blocked.

The NAM conference agreed to study and report on the impact of US sanctions, ensuring that the movement against illegal unilateral coercive measures by the United States will continue.

Russia, an observer of the NAM, was represented by Vice Minister Sergey Ryabkov who said the US was strangling Venezuela with one hand through sanctions while pick-pocketing it with the other by freezing its assets held in Western banks. Ryabkov told The Grayzone, “the US has sanctioned almost 70 countries in recent decades, impacting the lives of over one-third of the world’s population.”

The US tried to threaten diplomats to convince them not to attend the meeting, but was unsuccessful. Jorge Arreaza, the Venezuelan Foreign Minister, described the successful summit as “a failure of US diplomacy” driven home by “120 countries [that] are not aligned with the US… they want to be free, they want to be independent.” He described the Non-Aligned Movement as a “vaccine against unilateralism.”

President Maduro spoke at the meeting. He underscored the march of history toward freedom and the end of US empire describing the 21st Century as “the century of freedom, it is the century of the end of empires, and it is just beginning in 2019…nothing, nor anyone will stop us…no one can stop the course of the new story that is making its way!” 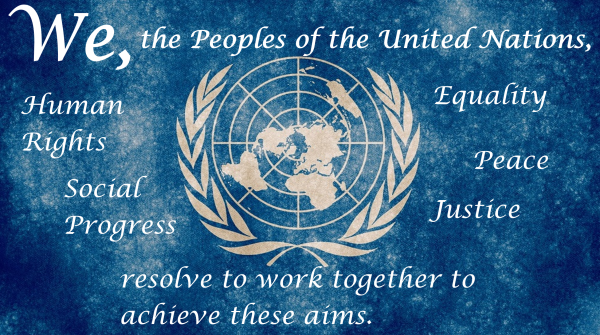 People’s Movements Organizing Against US’ Violations of International Law

The US blockade against Venezuela and continued threats of military attack galvanized worldwide protests this weekend. Popular Resistance joined with other social movements and civil society organizations in denouncing the blockade.

In addition to the Non-Aligned Movement’s renewed commitment to the United Nations Charter, popular movements are organizing along similar lines. This week, we launched the Global Appeal to Save International Law, an effort to create a global network of people and social movements to demand respect for the United Nations Charter and its use as a tool for maintaining peace, guaranteeing human rights and protecting the sovereignty of nations.

Sign on to the Global Appeal to Save International Law here.

From September 20-23, a coalition of organizations is holding the People’s Mobilization to Stop the US War Machine and Save the Planet. The Mobe will highlight the role of US militarism as the largest polluter on the planet during the Global Climate Strike on Friday, September 20 and join in calling for decolonization at the Puerto Rico Independence March on September 21. The People’s Mobe will hold a rally at Herald Square at 2:00 pm on Sunday, September 22. On Monday the 23rd, we will hold an evening event: “A Path To International Peace: Realizing the Vision of the United Nations Charter,” which will feature social movements and government representatives working for an end to US violations of international law. Registration is free, but is required. Register here.

Sign up to get updates about the People’s Mobilization to Stop the US War Machine and Save the Planet!

Opposition to US violations of international law were also evident at the Sao Paulo Forum held in Caracas from July 25-28 with the participation of 190 organizations, political parties, social movements, workers’ movements, parliamentarians and intellectuals from Latin America, the Caribbean and several continents. Seven hundred people participated in the four-day event showing unity across Latin America against US aggression.

A dozen members of the Venezuelan Embassy Protection Collective attended the forum, spoke to the conference and were received with standing ovations for their work to uphold international law. The Collective had challenges getting to the Forum, due to US airlines no longer flying to Venezuela, and one member was harassed at the US border when he returned.

A Final Declaration was issued by the Forum in support for Venezuela, Cuba, Nicaragua and other progressive governments under attack by US imperialism and for a demand to free Lula and other left-wing leaders imprisoned for political reasons. 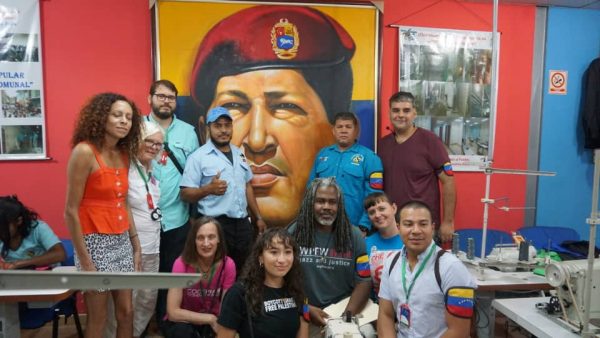 Members of the Embassy Protection Collective in Caracas.

People are standing up to US interventions in many other countries. In Honduras, there are widespread protests against the US-installed coup president, Juan Orlando Hernandez, who was indicted last week in the US for drug trafficking. US-trained police are responding to protests with violence.  A hunger strike by political prisoners turned into a call for Hernandez’s resignation. Embassy Protector Adrienne Pine is there and reporting via Twitter.

In Nicaragua, peace has prevailed after a US coup attempt last year. A US-funded Human Rights Director was accused of massive theft of US regime change dollars and inflating death tolls. To understand Nicaragua, read this excellent book by social movement leaders. There is a great deal happening in Cuba, Colombia, Brazil, Ecuador and other countries responding to US domination. Stephon Sefton writes that the next five years will be pivotal for the Left in Latin America.

Another top target is Iran where the US has escalated its economic war after Trump violated the nuclear arms agreement. Iran is being very strategic in responding to US aggression in the Strait of Hormuz and the US has been unable to get traditional allies like France and Germany to join with it, causing concerns within the US foreign policy establishment. The US economic war is undermining the Iranian economy and causing tens of thousands of deaths annually.

Iran has never attacked another country nor invaded a country to steal its resources. They are proud of their skills in diplomacy and negotiation, as a veteran of the Iraq-Iran war wrote to President Trump in an open letter. He warns that the initiator of war is the loser, and attacks on Iran will backfire. Foreign Minister Zarif made a similar point with regard to the unilateral coercive measures saying US economic terrorism will backfire against the US. 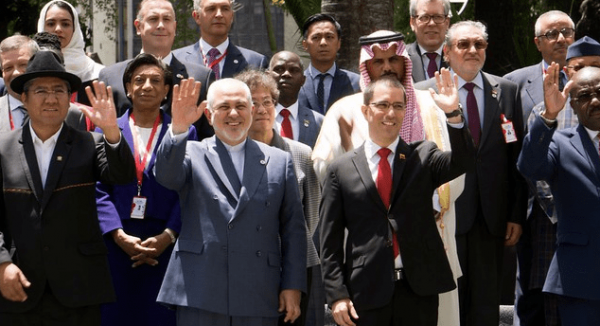 High level officials at the Non-Aligned Movement meeting in Caracas, 2019. By the Grayzone Project.

The Loss of US Supremacy

Countries are responding to dollar domination by trading without the US dollar. JP Morgan’s private bank advised clients that “the US dollar could lose its status as the world’s dominant currency” and urged investors to diversify their currency holdings. New financial structures are being created by Europe, Russia, Iran, China, and others to trade without the dollar. The value of the dollar is in decline and last month Credit Suisse predicted it would continue to fall.

The US political leadership seems unable to change course. The bi-partisans in Washington, DC passed a record-setting two-year military budget that continues to misspend US resources on an arms race and never-ending war rather than on critical needs at home. The failure to rebuild infrastructure, make education from pre-school through college free and available to all, confront the lack of investment in cities and rural areas and confront the crisis of healthcare with national improved Medicare for all will cause a downward US spiral.

The myth of American Exceptionalism is being exposed, as we discuss with Danny Haiphong on Clearing the FOG. We need to prepare for a new era as the 2020’s offer potential for significant social and political transformation if we work at it.