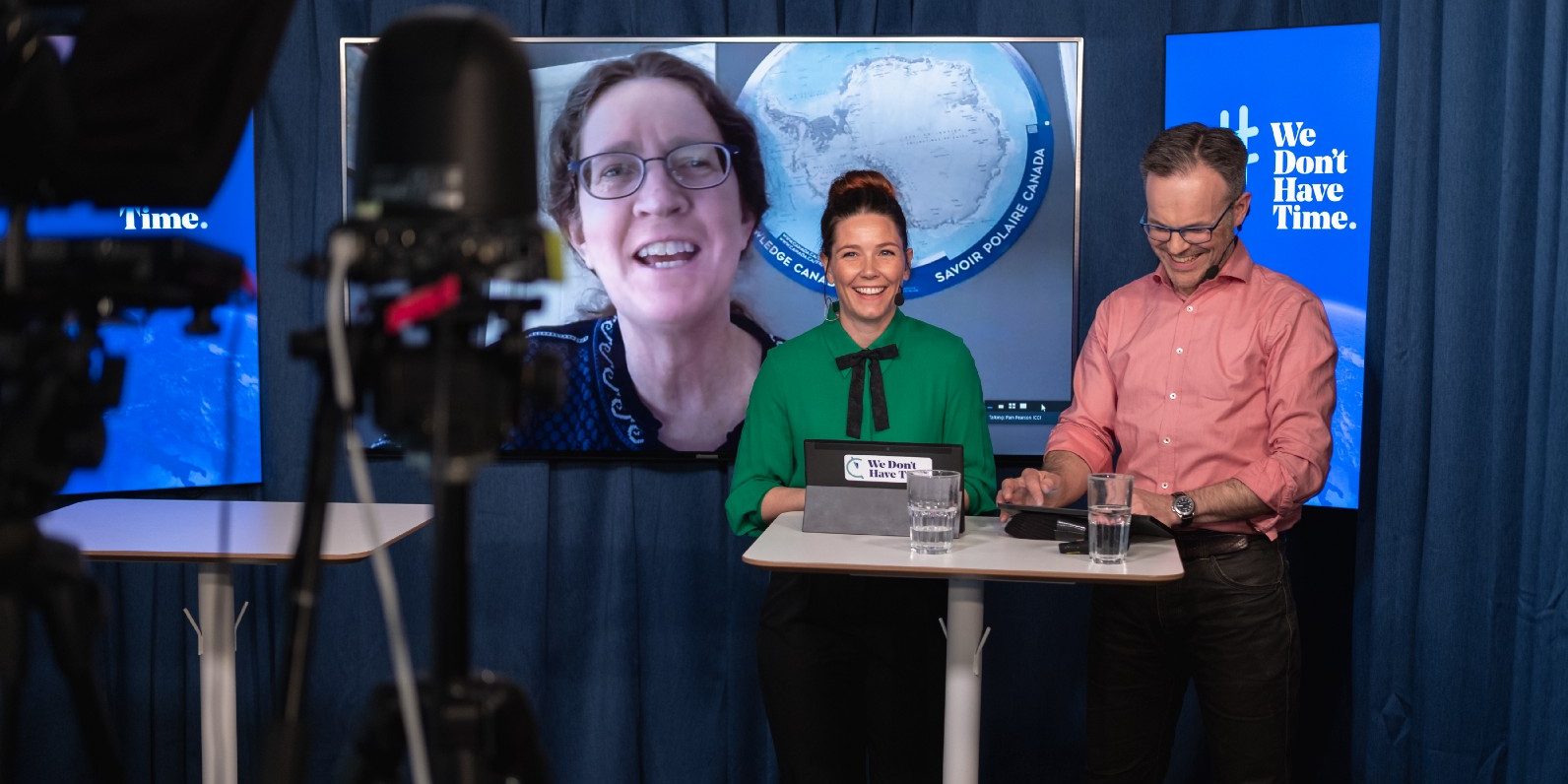 This is a story about how thousands NOT travelling by air to a climate conference from over 70 countries all around the world saved the atmosphere from 99.99 % of the CO2 a physical event would have emitted. And that thinking and acting outside of the ‘carbon box’ helped set a new standard for climate neutral virtual conferences.

The #WeDontHaveTime Climate Conference was totally emission and admission free and broadcast to a public global live audience on Earth Day April 22 2018. The event also marked the launch of the new global climate movement: WeDontHaveTime.org.

No keynote speaker, visitors (viewers) or other participant was allowed to travel by air to the conference. The carbon emitted was compensated for through a collaboration with the event partner Trine making it zero carbon.

Panel discussions followed in the conference’s three parts: Reality, Solutions and Action, each over an hour long. The live audience was able to join the discussion using the hashtag #WeDontHaveTime. Over 4 hours of live video is since available on the YouTube Channel featuring some epic one-liners, previously unheard facts and hot topics and discussions were released.

People from all over the world participated and many watched well over an hour but the average viewing time just over 18 minutes.

And the dramatic ‘aftermovie’ has since become viral with over 200 000 views in only two days! Please help us by sharing it in order to help get the word out to those that haven’t already woken up to the threats of climate reality.

Do join the more than 4 000 people that subscribe to the WeDontHaveTime YouTube Channel to get more when we launch keynotes and more to come.

99,99 percent of carbon was saved by WeDontHaveTime

There you have it! That’s the actual carbon footprint of the #WeDontHaveTime Climate Conference: 4.1 tonnes.

The carbon from the conference was then rounded up to 5 tonnes that Trine has invested in off-grid solar making the event as such totally zero carbon.

The #WeDontHaveTime Climate Conference saved the world 71 819 tonnes compared to if the event had the same same 9 174 people that had registered to attend the conference instead had travelled by air from the country of origin. That means the conference saved 99.99 % of the carbon those people would then have emitted.

The effects on charing crucial climate knowledge via the conference is hugely beneficial while the carbon effect is zero. This must be implemented elsewhere and again!

Details about the calculation

We have made the calculation to show the difference between our ‘no-fly’ conference and if we’d have had the conference at a live venue where people had travelled by air or other means of transportation.

With the help of our partner Trine, we measured the carbon emissions from the conference and through them we had an offset. The streaming of the the conference video* made up a carbon footprint of 2 783 tonnes.

The actual broadcast was done in a Stockholm based studio had some 50 people visiting, including staff, the venue. We had a dress rehearsal on the day before that has been taken into account for in the calculations.
The same goes for all transportations, food and beverages.

The total carbon emissions from transportation, food & drinks, energy consumption amounted to 1 355 tonnes.
The template for calculation the carbon weight from streaming is that each streamed hour amounts 0.4 kilograms of carbon (CO2)*.
This is probably a bit on the high side (more than the actual number) but we will use it to be on the safe side for our carbon compensation.

The total net carbon emission were thus 4.138 tonnes where 2 738 was associated with the streaming of the event and 1 355 tonnes to produce the event, hospitality and transportation. The total carbon compensated for as investment in off-grid solar is equivalent to 5 tonnes of carbon.

These calculations are of course theoretical but had we had we offered the same line up we most likely would would have hade about the same number of global visitors, only more affluent ones perhaps. The truth is in the skies.

Trine has been kind enough to offer our readers a one-off special offer. Trine adds 10 Euros, that is €10 (ten Euros) for all new investments to start when using the code WDHT at Trine.

All new investments goes into solar offgrid energy solutions. So go save the world a little bit, if you can afford it, while making what seems to be un combination of an sound financial and environmental investment. All investments naturally also come with risks but this one seem like a win-win. WeDontHaveTime is not affiliated to Trine or gets any financial or other benefit from any investments you would make from Trine.

We thank our event partners: Aidbox, Business Insider Nordic, The 2022 Initiative and Trine for the 2018 Climate Conference. Let’s do this again!

Sources:
The source for the virtual distances to travel by air has been Distance.to
* The source for streaming of video is estimated to release 0.4 kilograms of carbon (CO2) per hour, read the full article here.

We Don’t Have Time are currently building the world’s largest social media network for climate action.

Together we can solve the climate crisis. But we are running out of time..

Join the movement by reading our manifest follow the blog and taking action or simply just enjoy seeing our impact and reach here.