Above Photo: From Bloomberg.com

Note: The wealth divide continues to grow at a rapid rate even though the Trump-Republican tax cut has not yet taken effect. The Bloomberg Billionaires Index reported that “The richest people on earth became $1 trillion richer in 2017, more than four times last year’s gain, as stock markets shrugged off economic, social and political divisions to reach record highs.” The recently-passed tax cut will primarily aid the already super-wealthy. WSWS summarizes the trends in wealth hoarding, writing:

“…the Bloomberg Billionaires Index published on Friday, … showed that the fortunes of the world’s wealthiest 500 billionaires rose 23 percent over the past year, making them $1 trillion richer than at the end of 2016. The combined wealth of this group reached $5.3 trillion. The gain of $1 trillion was four times last year’s increase.

“Bloomberg found that the world’s richest 500 people as a group added an average of $2.7 billion to their fortunes every day in 2017. This means that, on average, each of these individuals added $5,400,000 every day, or $225,000 every hour—roughly equivalent to the combined income of five working-class households in the US over the course of a year.”

The concentration of wealth also means concentration of political power, particularly in countries like the United States where money dominates elections between two parties that represent Wall Street. As can be seen in the recent tax bill, the government serves the wealthiest in a lop-sided class war rather than puts in place policies that would shrink the wealth divide and provide funding for a much-needed social safety net.Under the new tax, the top 1 percent will see a full 83 percent of the gains. The extremism of the wealthy and their bought-and-paid -for politicians of the corporate duopoly will increase the national consensus that radical transformation is needed in the economy and government. KZ and MF

The 23 percent increase on the Bloomberg Billionaires Index, a daily ranking of the world’s 500 richest people, compares with an almost 20 percent increase for both the MSCI World Index and Standard & Poor’s 500 Index. 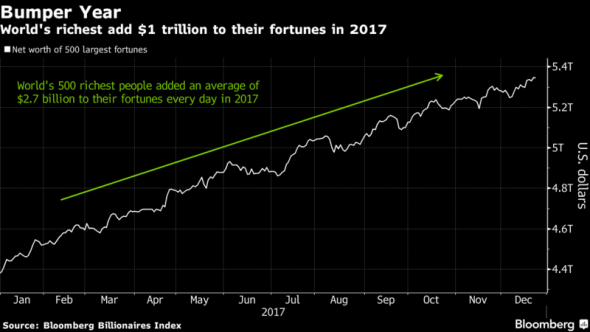 Amazon.com Inc. founder Jeff Bezos added the most in 2017, a $34.2 billion gain that knocked Microsoft Corp. co-founder Bill Gates out of his spot as the world’s richest person in October. Gates, 62, had held the spot since May 2013, and has been donating much of his fortune to charity, including a $4.6 billion pledge he made to the Bill & Melinda Gates Foundation in August. Bezos, whose net worth topped $100 billion at the end of November, currently has a net worth of $99.6 billion compared with $91.3 billion for Gates.

George Soros also gave away a substantial part of his fortune, revealing in October that his family office had given $18 billion to his Open Society Foundations over the past several years, dropping the billionaire investor to No. 195 on the Bloomberg ranking, with a net worth of $8 billion.

“It’s part of the second-most robust and second-longest bull market in history,” said Mike Ryan, chief investment officer for the Americas at UBS Wealth Management, on Dec. 18. “Of all the guidance we gave people over the course of this year, the most important advice was staying invested.”

With wealth surging to new highs, billionaires may quickly learn that a billion dollars doesn’t buy what it used to. The price of housing has topped $300 million, the cost of divorce has hit $1 billion and a rediscovered painting by Leonardo da Vinci sold for $450.3 million at a Christie’s auction in November, the most expensive work ever sold.

“Would you believe it?” Eli Broad, who has a $7.4 billion fortune and his own museum in Los Angeles, said after the sale. “It’s wild.”