The Year Of Car-free Streateries

Seattle – As our city starts to open back up, several issues are becoming quite apparent in our urban villages. In many, there is inadequate space on sidewalks to adequately social distance. There is also inadequate space to order and wait for food from restaurants for pick up. And given that restaurants will be extremely limited in the number of patrons that can dine in them, they will need to utilize the space in their parking lots or adjacent streets to allow dining with proper distancing measures.

This is an opportunity to prioritize businesses and pedestrians like none we’ve ever seen. We will need space so that our small businesses and restaurants can survive Covid. And given that we may be over a year away from a vaccine, these changes could not only be long-term, but the impetus needed to vastly improve livability in the densest parts of our city.

But first, we should establish what a streatery is. A streatery is the utilization of parking space–or even part of a street–for an outdoor dining space. These are common in a lot of European cities at this point, and the Seattle Department of Transportation (SDOT) started piloting them a few years ago.

Here in Wallingford, most of our restaurants and retail are focused on N 45th St. It is the heart of the urban village, though the Stone Way core is giving it a run as well. N 45th St is a 70-foot wide right-of-way cutting east-west between the U District and Stone Way. The sidewalks of N 45th St are too narrow to social distance properly. In many parts, they’re barely six feet wide, and especially so with people queued up to patronize restaurants. The present configuration is roughly this diagram below, which doesn’t lend itself to prioritizing anything but driving. 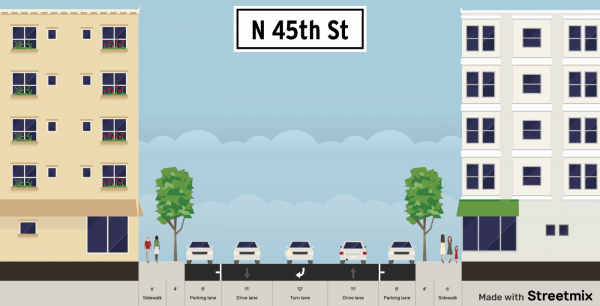 But there’s another, quieter, safer, more equitable possibility that would allow space to prioritize outdoor dining at these establishments, green mobility running east-west, and adequate social distancing. It also happens to be the only means of ensuring this arterial is quiet enough, and safe enough, for dining next to streets. Especially given the role that pollution–largely driven by cars–has in exacerbating coronavirus. It will be critical to ensure that these Streateries on Steroids don’t have cars idling next to them. 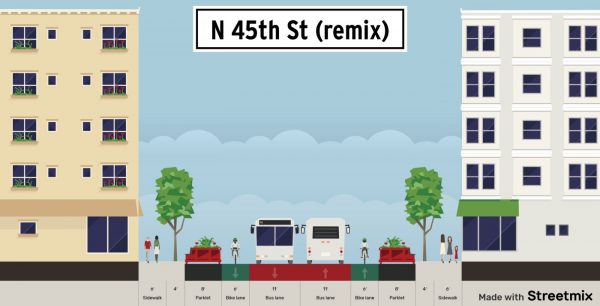 This is what I am proposing:

There can still be adequate space for deliveries and yes, not everyone can bike or walk, so the city will need to find space for those that have handicap placards and mobility issues. There could be a means of ensuring the ends of the streets intersecting N 45th St are prioritized for ADA and food delivery drivers. Deliveries could also be done in these zones, or perhaps midblock on N 45th St in the streatery zone. 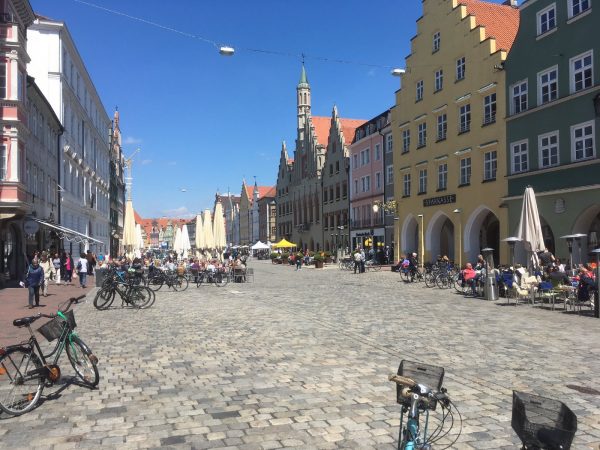 I know what you are thinking: N 45th St is a major east-west arterial and the city will fall into disarray if cars can’t drive through. This is, frankly, untrue as we have learned from previous street closures. We could take a note from cities like Ghent or Utrecht and divert cars to arterials around this zone. SDOT doesn’t even classify N 45th St as a major arterial, and there is space on N 50th St, N 40th St, and N Pacific St–especially with traffic numbers down as people work from home.

There will be other livability wins with this approach. Nearly two-thirds of the residents that live around N 45th St from SR-99 to 1st Ave NE are renters. Many of us don’t have cars, even families like ours.

With the Mandatory Housing Affordability upzones passing last year, we will start to see more and more residents living on this street, which is currently zoned for 55-foot and 75-foot tall buildings. As it continues to add density (much of it car-free or car-light), there will be an even greater need for both open space, as well as traffic calming measures.

There is a massive open space deficiency in the urban village (and most others), an outcome exacerbated by a century of poor urban planning. Most of our urban villages lack any retail depth off arterials, meaning that we won’t even be able to utilize off-arterial streets for these car-free zones and streateries. Yes, it will be a challenge. But these are challenging times and we will need to have bold leadership on this. Hopefully the Mayor Jenny Durkan, SDOT, our city council, and most importantly our small businesses are prepared for it.

Now, I also know that you’re thinking this is extremist. No, it’s not. It isn’t even anti-car. It’s pro-city. This is going to rapidly become the de facto norm in cities around the world. Vilnius is converting most of it’s core to a car-free open air café. London’s Mayor Sadiq Khan announced this week that large portions of the city would be closed to cars, stating, “If we want to make transport in London safe, and keep London globally competitive, then we have no choice but to rapidly repurpose London’s streets for people.”

In her West Seattle Town Hall this week, the Mayor said we can’t go back to the way things were. Cities around the world are moving in this direction. The longer we wait, the harder it will be to make these necessary and vital changes. We have open space deficiencies in our urban villages. We have inadequate space to social distance on our urban village sidewalks. I am looking at N 45th St, because it’s the closest to us. But we will need this in many, many neighborhoods. California Ave? Pike or Pine? Ballard Ave? The Ave? Probably! Let’s get ready–we could be in for one (of many) amazing summers. A greener, cleaner, safer, quieter world is possible!

Mike Eliason is a certified passivhaus designer, energy geek, and design nerd with an almost fetishistic interest in prefab wood buildings, low-energy architecture, social housing, and all things German. He has lived in Fremont for over a decade, and wants Seattle to become a greater version of Freiburg so his wife doesn’t force him to return to live in Vauban. He’s also begun the process of forming a baugruppe.