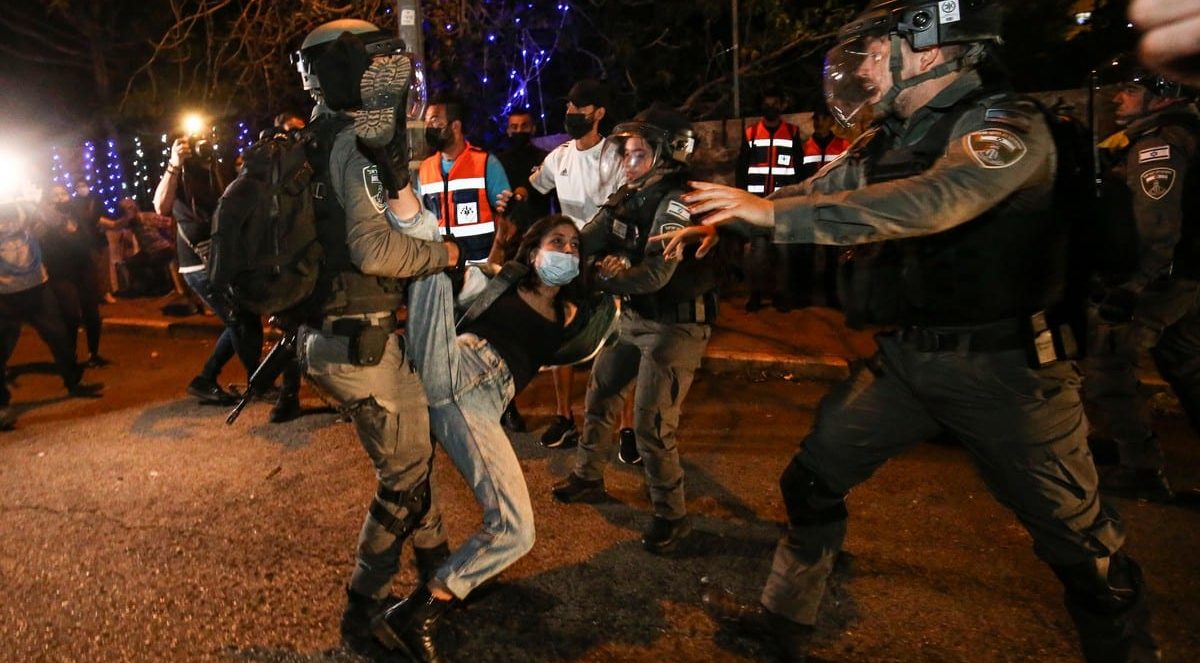 The Zionism Discourse On Palestine Is Crumbling

Above photo: Israeli forces drag an Arab-Israeli protestor during a demonstration at the Sheikh Jarrah neighbourhood, after the Israeli government’s plan to force Arab Israeli families out of their homes in East Jerusalem on May 05, 2021. Mostafa Alkharouf / Anadolu Agency.

Israel is an ‘Apartheid State.’

On April 27, one of the world’s largest and most credible rights groups, Human Rights Watch (HRW), concluded, in a comprehensive 213-pages report, that Israel is an apartheid state.

“Across these areas and in most aspects of life, Israeli authorities methodically privilege Jewish Israelis and discriminate against Palestinians. Laws, policies, and statements by leading Israeli officials make plain that the objective of maintaining Jewish Israeli control over demographics, political power and land has long guided government policy,” the report entitled “A Threshold Crossed: Israeli Authorities and the Crimes of Apartheid and Persecution” read in part.

More specifically, HRW wrote that Israeli “authorities have dispossessed, confined, forcibly separated and subjugated Palestinians by virtue of their identity to varying degrees of intensity.” This led it to unequivocally conclude that “these deprivations are so severe that they amount to the crimes against humanity of apartheid and persecution.”

While, on their own, HRW’s conclusions carry a significant legal and potentially political weight, the report is hardly an isolated event. Only a few months ago, in January, a leading Israeli rights group, B’tselem, reached a similar conclusion.

“In the entire area between the Mediterranean Sea and the Jordan River, the Israeli regime implements laws, practices and state violence designed to cement the supremacy of one group – Jews – over another – Palestinians,” B’tselem’s report, entitled “A Regime of Jewish Supremacy from the Jordan River to the Mediterranean Sea: This is Apartheid”, read.

The above are two significant, if not earth-shattering, additions to a burgeoning legal literature that points to Israel’s racial discrimination and outright apartheid. All of this signals a vastly changing discourse concerning Israel’s unlawful practices in occupied Palestine.

In fact, both reports are published against the backdrop of an equally unprecedented study conducted by the United Nations itself. In 2017, the UN-affiliated Economic and Social Commission for Western Asia (ESCWA), released its own report, entitled “Israeli Practices towards the Palestinian People and the Question of Apartheid”. The UN report was authored by two leading intellectuals, international law expert Professor Richard Falk and political scientist Professor Virginia Tilley. Its language represented a radical departure from the UN’s ever-guarded approach to the Palestine-Israel subject, often the outcome of fear of American retribution.

What makes HRW’s latest report, however, more significant than any other previous legal arguments regarding racism and apartheid in Israel, is its timing, as it was published shortly after the International Criminal Court (ICC) decided, despite intense Israeli lobbying and American pressure, to open an investigation of alleged war crimes committed in occupied Palestine.

Though the ICC investigation does not, as of yet, include the Crime of Apartheid, future findings, especially with the HRW report in mind, could alter the course of the investigation. Indeed, the exhaustive HRW report certainly provides ample evidence that the crime of apartheid is, in fact, being committed and is widely spread, not only in occupied Palestine but also within historic Palestine, today’s Israel.

That in mind, it is important that the HRW, B’tselem and ESCWA reports are placed within a proper context, one that examines the evolution of the apartheid narrative, mostly in the Western discourse, concerning Palestine and Israel. This understanding is important in the sense that it could help illuminate the possible direction, in addition to the political and legal consequences of labeling Israel an apartheid regime.

Tellingly, it was Africa, not the West, that first began coining today’s terminology concerning Israel’s racism and apartheid. In 1975, the Organisation of African Unity passed Resolution 77 (XII), condemning Israel’s founding ideology, Zionism, as it considered it “a danger to world peace”. Then, it launched a global campaign aimed at unmasking “the racist aggressive nature of the Zionist entity”. This condemnation was made within the larger context of condemning racist apartheid regimes in South Africa and elsewhere.

It is historically significant to point out that it was this morally driven African stance on Palestine and against racism in all of its forms, which served as the foundation upon which UN General Assembly Resolution 3379 of 1975 was based. The UN Resolution, which was revoked in 1991 under intense American pressure, had recognized Zionism as “a form of racism and racial discrimination”.

The famous 1997 declaration by South Africa’s anti-apartheid icon, and first post-Apartheid President, Nelson Mandela, that “we know too well that our freedom is incomplete without the freedom of the Palestinians,” was not an isolated moral stance against injustice. Instead, it was fully consistent with other statements and declarations made by many other African liberation leaders throughout the continent’s anti-colonial struggle.

With time, the direct correlation between South African apartheid and Israeli apartheid became more palpable. “I have witnessed the systemic humiliation of Palestinian men, women and children by members of the Israeli security forces,” said anti-apartheid leader, Archbishop Desmond Tutu, following a trip to Palestine in 2014.

“Their humiliation,” Tutu added, with reference to the Palestinians, “is familiar to all black South Africans who were corralled and harassed and insulted and assaulted by the security forces of the apartheid government.”

In a 2014 interview with the US-based TV program, ‘Democracy Now’, MIT Professor Noam Chomsky went further, suggesting that “in the Occupied Territories, what Israel is doing is much worse than apartheid.” He elaborated,

“To call it apartheid is a gift to Israel, at least if by ‘apartheid’ you mean South African-style apartheid. What’s happening in the Occupied Territories is much worse. There’s a crucial difference. The South African Nationalists needed the black population. That was their workforce. … The Israeli relationship to the Palestinians in the Occupied Territories is totally different. They just don’t want them. They want them out, or at least in prison.”

Even before radical intellectual voices were openly using the word ‘apartheid’, the term was slowly surfacing in mainstream Western societies and intellectual circles. Defending his 2006 book “Peace Not Apartheid” in an interview with American National Public Radio NPR, former US President Jimmy Carter insisted that “Apartheid is a word that is an accurate description of what has been going on in the West Bank, and it’s based on the desire or avarice of a minority of Israelis for Palestinian land.”

With time, references to the term ‘apartheid’ were utilised by other mainstream leaders, intellectuals, and celebrities. A recent example is that of famous American actor Mark Ruffalo’s interview with Mahdi Hasan’s NBC program last October. Ruffalo courageously spoke of the Israeli violence and “asymmetrical warfare” against the Palestinian people, describing the system of separation created by Israel as a “kind of apartheid”.

These are but a few examples of many such references to Israeli apartheid which are growingly present in academic research, in social media and in statements by high-profile individuals. Fearing that the label of apartheid is on its way to being the acceptable designation of Israel, the Israeli government and its supporters are laboring to mute the conversation altogether, by equating criticism of Israel and Zionism with anti-Semitism.

However, as HRW’s and other human rights organisations’ reports have indicated, Israel is clearly losing the battle of public opinion.

Anti-Semitism, or the supposed hate for Israel, has nothing to do with any of this. As the HRW report and the previous report by Israel’s own rights group, B’tselem, demonstrate, the use of the word ‘apartheid’ is grounded in a legal framework, which was articulated by the United Nations itself.

The crime of apartheid’, which shall include similar policies and practices of racial segregation and discrimination as practiced in southern Africa, shall apply to the (…) inhuman acts committed for the purpose of establishing and maintaining domination by one racial group of persons over any other racial group of persons and systematically oppressing them..

None of the previously mentioned reports deviated from that description. For example, HRW wrote,

A stated aim of the Israeli government is to ensure that Jewish Israelis maintain domination across Israel and the OPT (Occupied Palestinian Territories). (…) Other steps are taken to ensure Jewish domination, including a state policy of ‘separation’ of Palestinians between the West Bank and Gaza, which prevents the movement of people and goods within the OPT, and ‘Judaization’ of areas with significant Palestinian populations, including Jerusalem as well as the Galilee and the Negev in Israel.

Dismissing a legally justifiable conclusion – itself based on the harrowing reality under which Palestinians have been forced to subsist for decades – as if another form of ‘anti-Semitism’ is a desperate attempt at delaying the inevitable. Israel’s apartheid status will eventually become the global designation of Israel’s practices in Palestine, as was the case in South Africa.

In truth, the cracks in the wall of the Israeli narrative were always present. Critics of Israel’s racist and violent policies against Palestinians included many courageous intellectuals and movements, some of whom paid a heavy price for that courage. But a combination of factors, including the absence of Palestinian voices in mainstream academia and media, in addition to the intimidation tactics and smear campaigns used by Israel and its supporters, kept criticism of Israeli apartheid at a minimum.

The genie, however, is finally out of the bottle and a massive edifice of intellectual, historical and legal discourses are quickly building up an irrefutable case against Israel’s apartheid. No amount of Israeli propaganda and smear campaigns can turn the tide back in favor of Israel. While it may be too early to speak of a major paradigm shift, it is certainly no longer far-fetched to imagine that such a possibility is finally at hand.