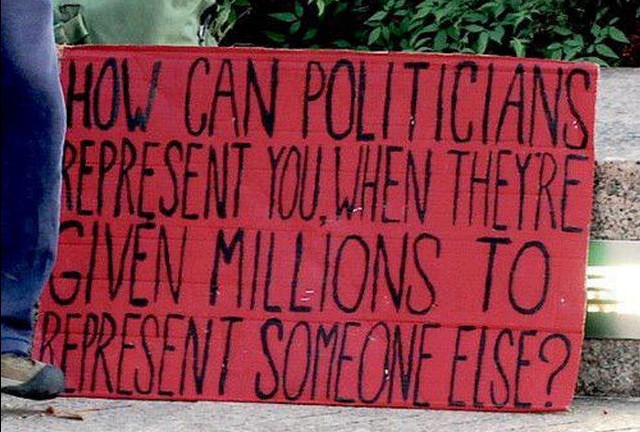 If you watched the corporate media and listened to the political leadership you would think Americans are Tea Party members who oppose taxes, even on the wealthy, would deny health care to someone in need who does not have insurance and favor war, rather than the United Nations. But, in fact, as the polls below show the opposite is true on these and other issues. On issue after issue both parties, especially the Republican Party, are out of step with the views of super-majorities of Americans. This is an update to a previous article, “We Stand With the Majority of Americans: Human Needs, Not Corporate Greed.” When the polls in this article and the previous one are reviewed it is evident the people would run the country better than the economic and political elites.

Seventy-nine percent support constitutional amendment to reverse Supreme Court campaign bribery decision. On the eve of the one-year anniversary of the Supreme Court’s controversial ruling in Citizens United v. Federal Election Commission, a new public opinion survey finds that seventy-nine percent of Americans sharply disapprove of the decision and support a constitutional amendment to reverse the Court’s ruling. The study, conducted by Hart Research Associates on behalf of Free Speech for People, confirmed previous polls that found wide-ranging and strong disapproval for the decision but is the most comprehensive to date to measure public support for enacting a constitutional amendment.

Sixty-one percent of Americans say that increasing taxes to the wealthy should be the first step toward balancing the budget. By contrast, 20 percent of respondents preferred cuts to defense spending as the first option, while 4 percent said that cutting Medicare would be the best way to start cutting the deficit. Three percent said they preferred cutting Social Security.

Eighty-eight percent of Americans say bonuses at banks should be banned or taxed at 50%.  According to the latest Bloomberg poll, a whopping 71% of respondents (many of whom are likely bankers) have said that bonuses at banks receiving bail out funds (that’s all of them) should be banned this year, and another 17% believe that a 50% tax should be imposed on all bonuses exceeding $400,000 (which, in another record bonuses year, will likely be most of them).  Seven out of ten American say it’s Wall Street’s turn to help bail out the government Treasury, supporting a tax on Wall Street profits as a way to reduce the $1.3 trillion deficit.

Forty-one percent of Likely U.S. voters say they are at least somewhat likely to boycott all companies that have been bailed out by the government

Seventy-seven percent of Americans think that “Congress should let the EPA do its job and 61% of Republicans feel the same way. What’s more, the majority of Americans feel that the EPA should do more, not less. The survey, conducted by the Opinion Research Corporation additionally found the following:  “Almost two thirds of Americans (63 percent) say “the EPA needs to do more to hold polluters accountable and protect the air and water,” versus under a third (29 percent) who think the EPA already “does too much and places too many costly restrictions on businesses and individuals.” Well under half of Republicans (44 percent), less than a third of Independents (29 percent) and under a fifth of Democrats (16 percent) think the EPA is going too far today. Only 18% of Americans think pollution safeguards should be lowered.

Fifty-eight percent of Americans want us to leave Afghanistan, a broad swath of Americans now agrees with the statement that the United States “has accomplished its mission in Afghanistan and should bring its troops home.” Just over one-third say instead that the USA “still has important work to do in Afghanistan and should maintain its troops there.” Among independents, 62% say the mission has been accomplished in Afghanistan. Even Republicans, traditionally the most supportive of military action, are split: 47% say important tasks remain to be done in Afghanistan; 47% say it’s time for the troops to come home.

Americans favor lifting Cuban embargo By a greater than two-to-one margin, Americans would like President Barack Obama and Congress to lift the Cuba embargo, according to a Widmeyer post-election online survey commissioned by Cuba Standard. Forty-seven percent of those polled said “yes” to lifting the embargo, compared to 22 percent saying “no”, and three in 10 (31%) unsure. Americans in favor of lifting the embargo and allowing travel to Cuba are also more intense, with double the number saying “definitely yes” (18%) than those saying “definitely no” (9%).

More Americans view socialism favorably than they do the Tea Party. 52 percent of Americans now hold unfavorable views of the tea party, a new high. These numbers are almost identical to the same poll’s findings in June 2010 — well before the ‘Baggers got blood libeled. Only 35% of Americans like the Teabaggers. As for socialism, it’s viewed favorably by 36% of Americans, a fact which will just make Teabaggers even angrier and crazier.

Sixty-nine percent oppose eliminating funding for PBS. A national survey undertaken by the bipartisan polling firms of Hart Research and American Viewpoint indicates overwhelming public opposition (69% to 27%) to proposals to eliminate government funding of public broadcasting, with voters across the political spectrum opposed to such a cut, including 83% of Democrats, 69% of Independents, and 56% of Republicans. More than two-thirds (68%) of voters say that Congressional budget cutters should “find other places in the budget to save money.”

Source: This article is based on a summary of polls published by Progressive Review