Iranian Press TV reported that in response to the government raising gasoline prices last week in order to moderate the national consumption rate, there were some peaceful protests, but riotous elements, abusing the situation quickly entered the scene destroying public property, setting ablaze banks and gas stations among other facilities, and opening fire on people and security forces. He further stated the violent actions were “completely based on a scheme pre-planned by the reactionary regional regimes, the Zionists, and the Americans.”

Reuters reports that Iranian President Hassan Rouhani claimed victory over the protests, saying, “The Iranian people have again succeeded in an historic test and shown they will not let enemies benefit from the situation, even though they might have complaints about the country’s management.”

In response to the foreign interference, Tehran summoned the Swiss ambassador, whose country represents the US in Iran, to protest Washington’s interference in the Islamic Republic’s internal affairs. Iran provided the Swiss an official protest note to the United States. Iran has blamed the United States, Israel and Saudi Arabia for interfering in Iran’s internal affairs.

US Secretary of State Mike Pompeo on Twitter supported the violent acts of rioters, whom he described as “the people of Iran.” Separately, the White House released a statement on Sunday, supporting “the Iranian people” in their protests. These comments were criticized by Iran’s UN Mission spokesperson Abbas Mousavi who referred to a BBC interview where “[Pompeo] explicitly said that the people of Iran must be kept hungry until they give in to ‘our demands’.”  Foreign Minister Mohammad Javad Zarif responded to Pompeo’s open threat to starve the Iranian nation describing it as “a crime against humanity” and “a desperate attempt to impose US whims on Iran.”

Press TV reports that Foreign Minister Zarif condemned as a “disgraceful lie” the US’s expression of support, saying Washington must, before anything, be responsible for waging economic terrorism and perpetrating crimes against humanity in dealing with Iranians. “A regime that hinders the delivery of food and medicine to ordinary [Iranian] people — including the elderly and the patients — through economic terrorism [tactics] can never claim support for the Iranian people in such a disgraceful way,” Zarif said on Monday.

According to the semi-official Fars news agency, Iranian dual nationals were among protesters arrested in the northern province of Alborz. Quoting security sources, it said detained German, Turkish and Afghan dual nationals had been trained and funded by foreign services to take actions to destroy infrastructure and stir up civil disobedience. These dual nationals had special equipment to be used for sabotage, it added without providing evidence or further detail.

Regarding the reports of casualties, Iran’s UN mission dismissed the reports as “speculative, not reliable.” Alireza Miryousefi, the mission spokesperson, tweeted, “The baseless allegations and fabricated figures by biased Western entities do not shake government’s determination in making prudent economic decisions while respecting human rights of its people, including to freely exercise their right to protest in a peaceful environment….”     – KZ

There are a few riots in Iran and Amnesty International is on it:

Amnesty International @amnesty – 15:50 UTC · Nov 19, 2019At least 106 protesters in 21 cities have been killed in #Iran, according to reports we have received. Verified video footage, eyewitness testimony & information gathered from activists outside Iran reveal a harrowing pattern of unlawful killings by Iranian security forces. 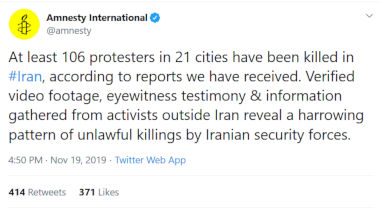 The Iranian government decided to increase Iran’s super low gasoline prices. The new price will only apply to the amount of gas that exceeds a subsidized 60 liter per family per month. The additionally money will be distributed to the poor.

The move makes economic sense. It had previously been recommended by the IMF.

The usual suspects have used the announcement to launch protests and riots in several Iranian cities. Some banks were set on fire and security personal were attacked. The CIA and the MEK cult are certainly trying to push for additional disturbances. The Iranian government cut internet access to prevent that.

As long as I can remember such protests and riots have happened in Iran every other year or so. They usually die down within a week. I am confident that the same will happen this time.

But that of course does not stop the “regime changers” and their claquers from raising the usual nonsense. So we get “eyewitness testimony” from “activists” who are not in Iran on events that allegedly happen within Iran.

It is interesting that they don’t even try anymore to make sense.